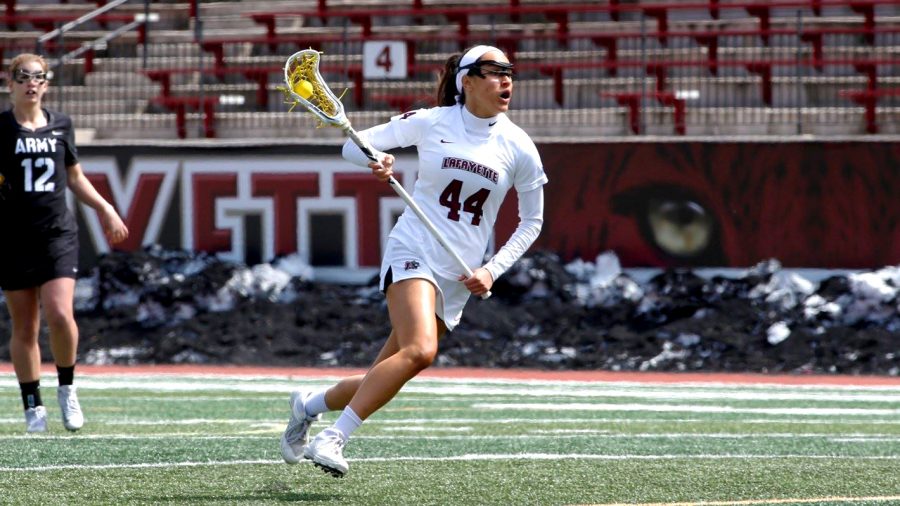 Lafayette's offense proved to be too much for Iona as the Leopards scored 14 goals in the win. (Photo courtesy of Athletic Communications)

The women’s lacrosse team earned a 14-6 victory over visiting Iona this past Tuesday, moving Lafayette’s record to 2-0 with a pair of resounding wins to open the season. The team has outscored opponents 32-7 in the two contests.

“It’s been incredible to have the results we’ve had in the past two games and because of that it pushes us to work even harder for the games ahead,” Kirby said. “We’re lucky to have such a big senior class and one of our goals as graduating class is to have no regrets this season.”

Three seniors bring excellent leadership to the defensive side of the field, as Elise Ashford, Amelia Heisler, and Annelise Kinney have all had major impacts so far. Lacy credits the trio with the Leopards’ strong defense so far.

“All three of them of them know what to expect and what is going on and can take control and direct what they want both our own team and the other team to do,” Lacy said. “There is a lot of communication as well.”

Kirby echoed those thoughts, noting the “strong leadership on all ends of the field” as a key to the team’s early success.

“Everyone has been pushing each other to be the best we can be,” she said. “Defensively, to be able to hold teams to single digits and offensively, to extend the lead is amazing.”

The Leopards held a 35-25 shot advantage and committed eight fewer turnovers than the Gaels, and also went 22-24 on clears and scooped 27 ground balls compared to Iona’s 17.

“Unlike last year, we are more willing to take risks and have set up our defense so that we can take those risks which has allowed us to be proactive and aggressive towards other teams,” Lacy said.

Despite the strong start, the team is taking things one day at a time and focusing on being consistent as they move towards Patriot League play which starts in mid-March.

“We plan to just keep working hard in practice and staying positive, never underestimating ourselves or our opponents,” said sophomore midfielder Mae Mullany.

Next up for the Leopards is a visit to Temple University in Philadelphia, Pa., kicking off a three-game road trip.