Softball gets weird during practice 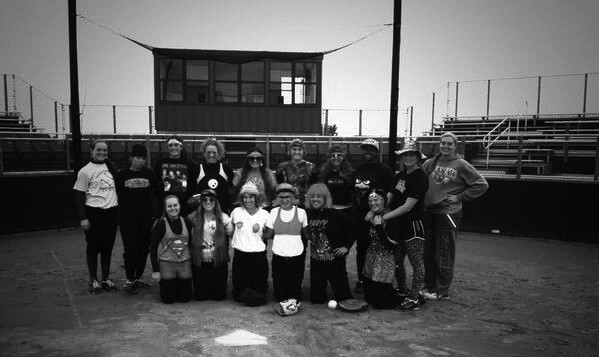 The Lafayette softball team has taken to holding fun themed practices, complete with costumes, to shake things up.

“Winning means you’re willing to go longer, work harder, and give more than anyone else,” reads the Lafayette softball team’s Facebook cover photo. What it doesn’t mention is their commitment to having fun in the process.

The Lafayette softball team can often be found practicing while sporting synchronized neons, Onesies, and other non-traditional softball wear.

Themed practices, now a tradition, were brought to the team by current head coach Jexx Varner, who is nearly halfway through his first spring season at Lafayette. During an early fall practice, he went over dress codes and mentioned the idea of themed practices.

“It was partially because we were unsure about what practice uniforms we all could wear,” catcher Stephanie Schreiber ‘16 said. “It’s also something funky and eccentric to keep practices upbeat.”

By the last few practices of the fall season, among team workouts and 6 a.m. lifting, the themes had intensified.

“At the end of any season I think coaches realize the team is getting burnt out and it’s always good to throw a little fun in there for us,” Kristen Berger ‘15 said. “

The one rule to themed practices, the team reported, is that the players must be able to practice and condition in whatever they wear. “Some people definitely push the limits on that one,” Berger said.

Other team members described the themes as “fun,” “random,” and “involving the weirdest stuff.” These days often have music blasting from speakers in the background– “Let It Go” is a team favorite. The outfits are modeled, photographed and Tweeted.

Varner also brought “a new culture” to the team, according to senior outfielder Amy Gebhardt. The new coach stresses “a more mentality-based game.” Gebhardt believes the increased intensity has shown itself in results.

“Based off of [the weekend in Virginia], we’re already better than we were last season,” she said. In Farmville, Va., Lafayette played a victorious game against the “more competitive” Towson, winning in the 11th inning.

The ultimate outcome of the weekend consisted of one win and three losses for the team. But the players recall the trip fondly, particularly the long bus trip and the team bonding and One Direction karaoke that took place aboard, and with excitement and hope for the rest of the season.

In terms of future themed practices, Schreiber predicts a possible St. Patrick’s Day or April Fool’s theme. “I could even picture us doing a theme based on a movie, like Frozen or Catching Fire,” she said.

It’s important to keep in mind that the game’s priority is on softball, not on competitive costume-wearing.

“We will have more themed practices or fun days, but those are days that have to be earned,” Berger said. “It’s something that happens after we have gone weeks of working hard and we just get to let loose one day as a reward.”