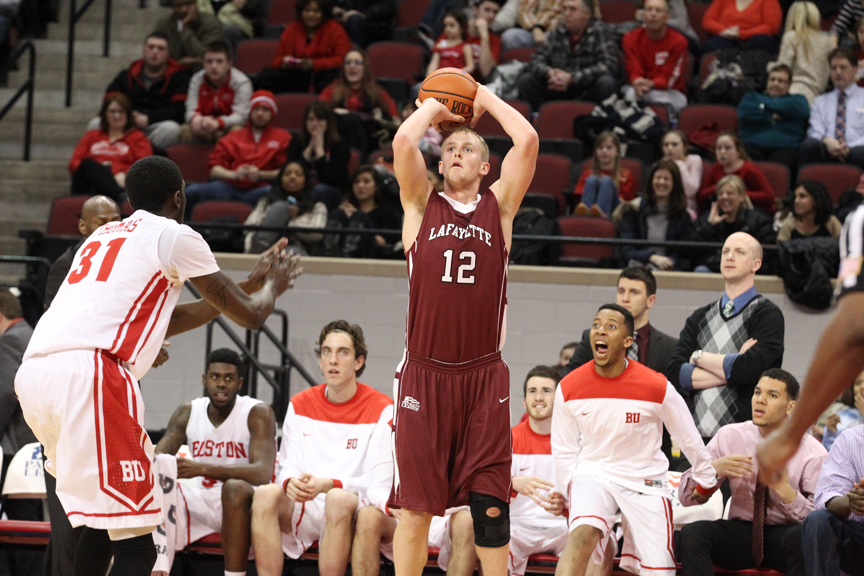 It was a tough outing for Lafayette on Wednesday. Even the Boston bench did its part harassing Lafayette shooters.

There is no way around it – Lafayette got absolutely steamrolled by Boston University on Wednesday night in the Patriot League Quarterfinals.

The top-seeded Terriers (23-9 overall, 15-3 Patriot League) defeated Lafayette (11-20, 6-12 PL) for the third time this season. This time, though, it came in record fashion. The 91-54 defeat was the widest margin of victory in the history of the league quarterfinals.

The Leopards had to have been playing ‘What if?’ scenarios in the course of the bus ride home to Easton.

Here is the most common one: what if leading scorer and captain Seth Hinrichs ‘15 was healthy throughout the season?

Head coach Fran O’Hanlon all but hinted at the answer to that very question in his post game remarks to the media.

“First we go to Colgate, then Army…we go to Loyola and then we come up here [to Boston],” O’Hanlon said. “It’s kind of like a pro schedule without having a charter flight. That’s within seven day.”

“That’s why the league [play] is so important.”

O’Hanlon is referring to the situation Lafayette put itself in in the league tournament. To win the championship and clinch an NCAA Tournament berth meant winning four straight road contests.

The Leopards, minus Hinrichs, lost their first nine league games in a winless January and quickly found themselves dead last in the standings. While the return of Hinrichs propelled them to six wins in seven games, Lafayette then dropped its last two to Colgate and Army and thus lost its chance to host a playoff game.

Instead, O’Hanlon and company packed their bags and headed to Loyola for their opening round matchup on Monday night. Following their 84-71 victory, it was back to Easton before traveling to Boston.

Lafayette led just twice against the Terriers – 2-0 and 5-3. From there on out, it was all Boston and sophomore guard Maurice Watson Jr. The All-Patriot League First Team selection scored 16 of his 21 points in the first half as the Terriers raced to a 42-27 halftime lead.

Watson Jr. was the star of the show, adding seven rebounds and eight assists as well as nearly completing a triple-double.

“He’s as good as anyone in our league,” O’Hanlon said.

Watson Jr. and Boston shot a phenomenal 66.1 percent from the field and made 10 of their 21 3-point attempts. They won the rebounding edge 33-24 and forced 17 Lafayette turnovers.

“We made some unforced turnovers,” O’Hanlon said. “We threw the ball out of bounds. People cut and we threw it to open space.”

“Against a team like that you can’t do that. You stay close it’s a different game but we didn’t do that.”

Lafayette meanwhile, shot 35.7 percent from the field and was led by Hinrichs and Scott who scored 13 points apiece.

It was almost an exact opposite to their performance against Loyola in which they shot 63.6 percent from the field and 47.1 percent from beyond the arc. They attempted 28 free throws in that game, compared to just seven on Wednesday.

For Lafayette, there is a silver lining: it will return the same starting lineup and rotation as it had this season. Freshman point guard Nick Linder, who was named to the Patriot League All-Rookie team, flourished throughout February and will only improve going forward.

But for now and at least for the foreseeable future until the sting of this loss slowly dissipates, the ‘What if?’ scenarios will continue.

Note: Boston will play No. 5 Army tomorrow while No. 3 Holy Cross travels to No. 2 American in the semifinals.