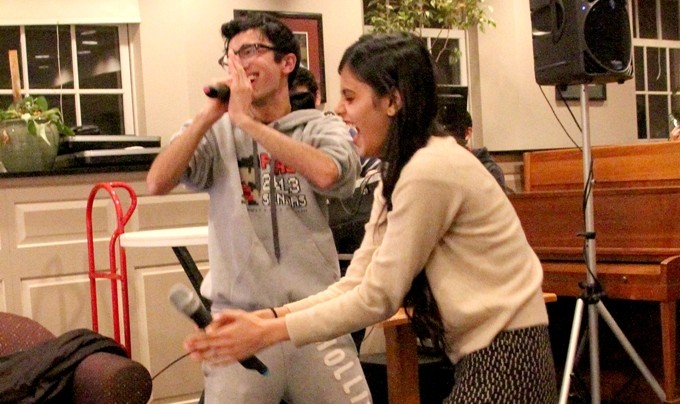 Nostalgia filled the air these past few days as Disney Week events pervaded the campus. Lafayette Activities Forum (LAF) planned a series of activities that have allowed Lafayette students to reminisce on the days of Mickey Mouse-shaped pancakes and dressing up as favorite princes and princesses.

“Other college campuses had events like this, and we wanted to bring that here,” Ly said. On Monday, LAF kicked off Disney Week by hiding Mickey Mouse ears around campus. Those students who found the ears and brought them to LAF’s office were entered into a raffle. The event was a success, as some students brought in up to 30 Mickey ears.

Wonderland Wednesday allowed students to take a closer look at Disney’s favorite fairytales. Director of Gender and Sexuality Programs, Gene Kelly, and Assistant Director of Residence Life, Daniel Bahner, led a talk about Disney princesses and gender, “Disney Princesses: A Critical Analysis,” during lunch with over 50 people in attendance.

“Disney princesses are so prominent in our lives just because a lot of us grew up with them, but we never really thought about the gender stereotypes that come with them,” Ly said.

When the First-Year Activities Board (FAB) heard about Disney Week, they approached LAF about having some involvement. While FAB’s Disney Karaoke was separate from LAF’s weeklong-event, it still held the same motive of bringing all students out to reminisce on their favorite Disney movies and characters.

“FAB was looking for another event to include not just the freshmen class, but the entire school,” FAB member Sasha Seliverstova ‘17 said. Unfortunately, a miscommunication between FAB and the DJ left many students disappointed with no Disney options to sing. Some students—the talented and those lacking talent alike — still gathered in Gilberts and sang their hearts out, though the excitement was diminished due to the change in theme.

Thursday was certainly the most anticipated night of the week with a viewing of the new Disney film, Frozen, in Kirby 104. There was a definite correlation between Wednesday’s talk and Thursday’s choice of film.

“It’s a new age Disney princess. She’s not the same as those original princesses, and that might bring about discussion” Ly said.

Disney week will come to a close tonight with Disney trivia from 8:00 p.m. -10:00 p.m. in the Farinon Snack Bar. Prizes will be awarded to the winners.

It is LAF’s goal to make Disney Week a new tradition, allowing students to revert back to their childhoods once a week each year.