Learning ‘as I live through it’: Idil Tanrisever ’19 honored as finalist for Global Citizen of the Year Award 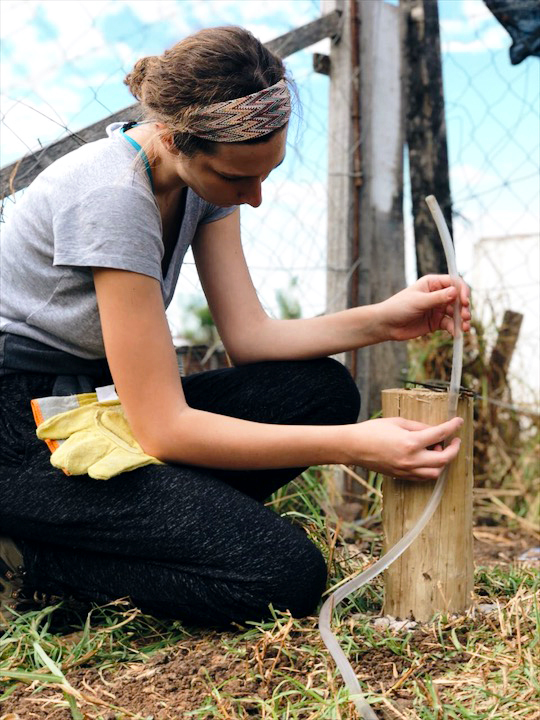 Although Turkey native Idil Tanrisever ’19 is already far from home at Lafayette, she continued to expand her horizons after she got to campus. She studied abroad in Buenos Aires, Argentina her junior spring semester in 2018, where she made a difference in the lives of others.

Tanrisever was named a finalist for the IES Global Citizen of the Year Award last week. She was awarded for her volunteer work and internship working with low-income communities in Buenos Aires.

Tanrisever is an economics major at Lafayette College. On campus, she is a resident advisor, a member of the Alpha Delta Gamma sorority where she co-founded the diversity and inclusion committee in the sorority.

As an international student from Istanbul, Turkey, Tanrisever has always enjoyed traveling and experiencing other cultures, including coming to the United States for college. She said she knew she wanted to study abroad even before she came to Lafayette.

“I really like traveling and…getting to know different cultures, and I think the best way to do that is to live somewhere,” said Tanrisever.

Tanrisever chose to study abroad with IES Abroad through their program Buenos Aires: Latin American Societies and Cultures. Students in this program take courses with either IES or local universities and participate in local events and field trips.

“I didn’t know a lot about Latin America so I thought it would be a great experience to just go there and learn about it as I live through it. I also wanted to improve my Spanish skills. I looked at different programs, but the program that I did…aligned with what I wanted to get out of my experience, just getting to know the social life. For me, it wasn’t just about traveling, but about getting to know where I am,” Tanrisever said.

Tanrisever took classes with IES Abroad such as “The Making of Patagonia”, an anthropology course about indigenous communities in Argentina, “Marketing in Latin America”, a class she ended up taking in a one-on-one setting and “Finance in Latin America”, which she took at a local university in Buenos Aires. She also took a Service Learning Seminar, which included both volunteering and bi-weekly meetings to discuss social issues emerging in Latin America, in order to further integrate herself in the community.

For her volunteer work, Tanrisever worked with multiple organizations. Notably, she spent two weekends helping to construct houses in different areas in the province of Buenos Aires for people in need.

“That was a very different experience than my life in Buenos Aires because it was the first time I experienced extreme poverty. The houses did not have sewage systems and barely had any furniture, and that was very eye-opening for me to see,” she said. “At the same time, it was the first time I was surrounded by people who did not speak English, so I had to understand them and speak Spanish, which was challenging at first but it got better.”

Additionally, Tanrisever volunteered at a daycare center throughout her program. The daycare served many underprivileged communities in Buenos Aires.

“I went and worked with the kids who had immigrant backgrounds and it was really important for them to have this,” she said, “because when their parents went to work, they came to this center and were surrounded by people who helped them with their homework, and they were given nutritious food. It was really a meaningful service for them.”

Once her abroad program ended in the spring of 2018, Tanrisever chose to stay in Argentina for the summer where she had an internship with an international development organization that an IES professor helped her find.

She noted that the internship was interesting because she could still volunteer with local communities while focusing on the “larger context” and learning more about “sustainable development goals and building reports on Argentina’s progress and other Latin American countries.”

Tanrisever also said that her favorite part of the experience was that it was a good time to explore her interests.

“I think being at Lafayette, I really liked the education that I received, but at the same time it gets really busy and it gets hard to just do things because you enjoy them. And so, study abroad for me was a time where I could really explore my interests and do what I want,” she said.

“These volunteering organizations…really helped me find what I’m passionate about,” she added.

Tanrisever reflected on the culture of Argentina, noting that “It’s definitely a different culture. For me, it was more familiar actually because there is a big Mediterranean influence in Argentinian culture because there [has been] a lot of immigration from Italy to Argentina in the past, so that Mediterranean culture is pretty dominant, I’d say. I’m from Turkey, so we also lived through that and it was more familiar to me” than it was to others on the program.

When asked about the most challenging part of her experience, Tanrisever acknowledged that the language barrier was frustrating at first.

“When I first went there, I didn’t understand anything on the streets…like the first month was frustrating, but over time, I kept pushing and kept pushing and I really tried to speak Spanish pretty often and as I was leaving Argentina, I could speak really well and I even had the Argentinian accent,” she said.

The Global Citizen of the Year award aims to recognize IES Abroad students who made an impact in their local community abroad and plain to continue their impact once they have returned home.

“Idil received this honor because of the contributions she made while abroad (particularly in her volunteer work and an internship both working with low-income communities) while studying with IES Abroad in Buenos Aires in Spring 2018,” Tricia Sylvia, a representative of IES, wrote in an email.

Tanrisever’s volunteer work confirmed her interest in her idea for her senior thesis. For her thesis, she is researching urban development projects in Istanbul and how they impact the relocated residents’ access to urban services.

Her experience abroad also inspired her plans for after she graduates this May.