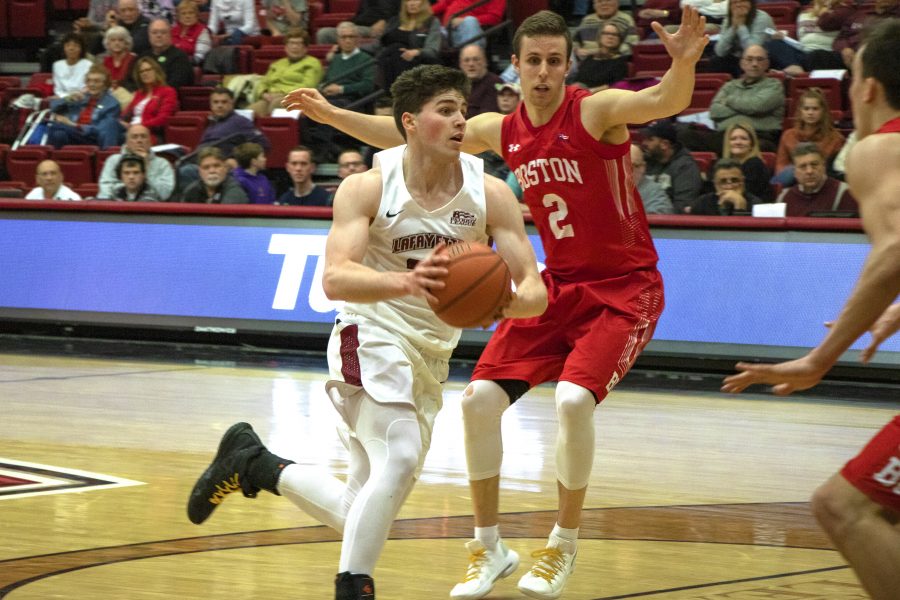 The men’s basketball team’s season-best five game win streak came to a halt with consecutive losses to Bucknell and Boston University (BU) last week. The Leopards were trounced by the Bison 118-76, and then lost a close contest to the Terriers 84-82. Before the Bucknell game, the team hadn’t lost since Feb. 2.

In the BU game, a strong shooting night by the visiting Terriers proved to be too much, despite five players scoring in double digits for Lafayette. Sophomore guards Alex Petrie and Justin Jaworski paced the offense with 19 and 17 points, respectively, while fellow sophomore guard E.J. Stephens added 15 points and four rebounds.

Junior forward Lukas Jarrett and senior forward Paulius Zalys both chipped in 11 points with the former grabbing eight rebounds and the latter dishing four assists. With just under nine minutes remaining in the second quarter and down by 14, the Leopards surged back into the game with a 23-11 run to narrow the deficit at halftime to 40-38.

A back-and-forth second half ended up with the Leopards down by two, with the ball, and 27 seconds remaining. Late jumpers from Petrie and Jarrett wouldn’t fall as time ran out.

“[Boston University] is a very good team, they play a very specific zone [defense] which has given other teams in the Patriot League some problems,” said freshman forward Sean Good. “We were looking to run some sets to be able to compensate for that zone.”

Against the Bison, a weak offensive outing for Lafayette was overshadowed by Bucknell as they shot a scorching 64 percent from the floor and 58 percent from deep, while converting 21 triples to set a new school record.

The lone bright spot was junior guard Kyle Stout, who shot 5-6 from beyond the arc and tied his career-high with 17 points. No other player scored in double digits for Lafayette, as the Maroon and White were no match for the red-hot Bison.

“Bucknell is a very good team, and [the] game was a bit of a wake up call for us as a team,” said sophomore guard Justin Jaworski. “They humbled us a bit, and our team is using that game as a refocusing point.”

Coming out of the first media timeout, Bucknell was able to rip off a 14-0 run, which built the foundation for a massive 63-27 halftime lead. In the second half, Lafayette attempted to find some kind of offensive spark, but the team was unable to keep pace with the barrage of triples from the Bison.

“They are a very good team, but our belief is that if we handle our business, we will get another shot at them in the playoffs,” said Jaworski. “And we will be more ready to go for that one.”

Lafayette now has just one more regular season game before the opening round of the Patriot League tournament starts next week.

“Especially after the Bucknell loss, there has been an increased sense of focus in our preparation,” Jaworski said. “Our practices leading up to that game weren’t our greatest, so there has definitely been a conscious effort to not let that happen again”

Prior to the team’s five game winning streak, Lafayette had lost four in a row, and were looking at a low seed and a likely early exit from the conference tournament. However, the team has turned around that losing narrative and have surged into a tie for the sixth in the Patriot League.

“Everyone on the team has really found their niche, of how they contribute to the team. That was big component of what led to us being able to go on that streak,” said freshman forward Sean Good. “At this point in the season, everybody has recognized their strengths, and what they do really well, which allowed us to communicate better with each other, and become a stronger unit as a whole.”

The Leopards will close out their regular season Saturday against Colgate, who is currently tied for first in the Patriot League. Tipoff is scheduled for 12 p.m. on Senior Day for Zalys and guard Auston Evans.