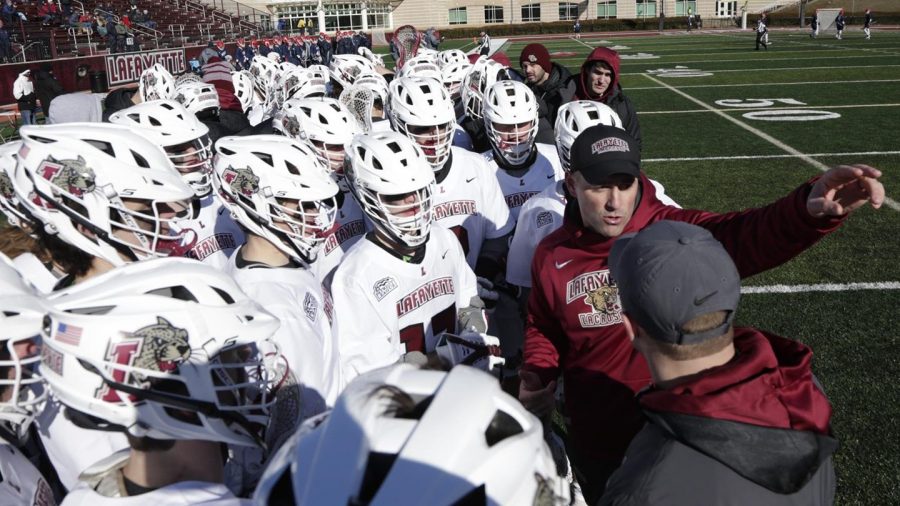 Men's lacrosse put up a tremendous fight in their comeback win against Binghamton. (Photo courtesy of Athletic Communications)

The Lafayette men’s lacrosse team put together an impressive comeback performance on Saturday against Binghamton in the HEADstrong Classic, winning 13-12 due to a late surge.

The victory came on a day when the team was raising money for the HEADstrong Foundation, which fights cancer and raises money for those affected by the disease as well as founding research for a cure, according to their official website. Lafayette dug themselves into a hole early in the game, but battled back after outscoring Binghamton 7-4 in the second half.

“The guys kept focusing on the next play and continued to chip away,” senior co-captain Conor Walters said. “It was not a perfect game, but we define success as competing for a full 60 minutes and we definitely did that on Saturday.”
The victory marks Lafayette’s final game of non-conference play as the team begins Patriot League play against Army on Saturday.
The Leopards found themselves down early, trailing 7-3 after the first quarter as the team was outshot 19-4 and struggled to move the ball down the field. Things began to turn around in the second, as the Maroon and White outshot Binghamton and entered the half only trailing by two, 8-6.
After an even third quarter, the Leopards trailed 9-8 at the start of the fourth quarter before outscoring Binghamton 5-3 in the final frame en route to the victory. With the win, Lafayette’s record sits at 4-1 which is their best start since the 2009 season.
Walters registered seven points in the game with five assists and a pair of goals and sophomore midfielder Andrew Robbins added four goals.
“I believe that the game against Binghamton was one of my better games so far this season,” Walters said.
Senior midfielder Connar Dehnert chipped in a pair of goals, and sophomore midfielder Bryan Hess scored the first two goals of the game and added an assist. On the defensive end, Freshman defenseman Stephen Sajer put together one of his best performances to date with three caused turnovers. Freshman goalie Ryan Ness tallied 12 saves, including four big stops in the fourth quarter.
The team has made the HEADstrong fund a tradition, and the players take pride in their association with the foundation, according to Walters.
“The HEADstrong foundation is an unbelievable organization that helps finance the research and the treatment that many families cannot afford on their own,” Walters said. “Cancer is something that impacts just about everyone at some point in their life, and the HEADstrong foundation has done a wonderful job bringing awareness to the cause, as well as supporting so many families that truly need the help.”
Next up for the Leopards is a trip to Army on Saturday with the opening face-off scheduled for 12 p.m.
Delete Image
Align Left
Align Center
Align Right
Align Left
Align Center
Delete Heading