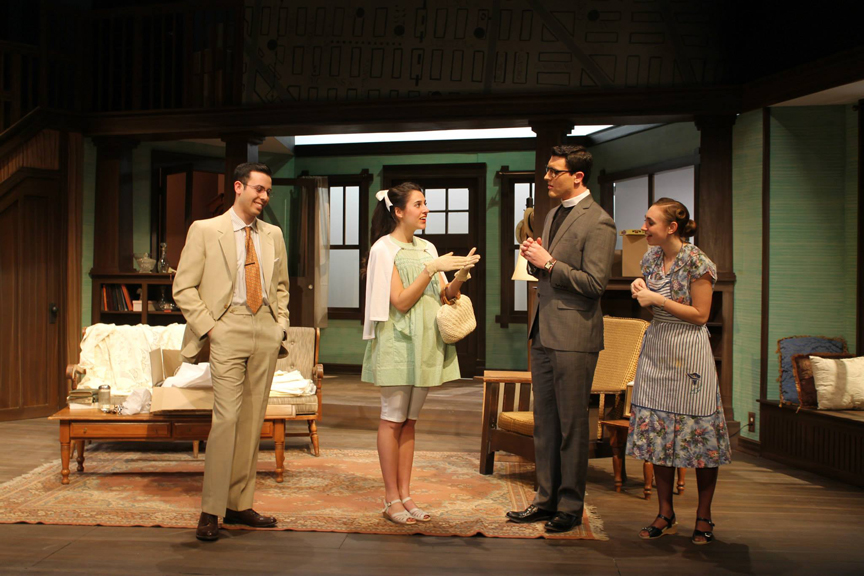 Last week, the Lafayette College Theater presented Clybourne Park, written by Bruce Norris and directed by Michael O’Neill. Composed as a response to Lorraine Hansberry’s famous play, A Raisin in the Sun, Norris’ piece focuses on class and race issues in the 1950’s through the eyes of a white couple whose black maid intends to buy their house.

Within the first five minutes of the College Theater’s production, I found myself pleasantly surprised by the quick-witted humor of Clybourne’s script, delivered flawlessly by each cast member. Being a dialogue-heavy play, the production focused less on the physical actions of each actor and more on quick, back-and-forth banter. I was impressed by the manner in which each cast member was able to be so smooth, natural and precise in delivering the time sensitive punch lines of the script, especially in light of the dialogue’s loquacious nature.

Although I was impressed but not highly captured by Act One, I was nonetheless drawn to the performance of Joseph Rothschild ‘16 during this section. Playing the character of Russ, a depressed, middle-aged white homeowner, Rothschild flawlessly exuded a biting, pithy sense of humor. This contrasted nicely with the performance of Aleni MacKarney ‘16, who played a role of comedic relief as a pregnant woman, endearingly clueless and deaf.

It turned out that Act Two would steal the show. Each actor and actress transformed into another character, and became a modern version of their 1950’s selves. I was captured by each pristinely delivered line throughout this act, regardless of its pertinence to the main issue—selling the house—at hand. Throughout this act, I was especially impressed by the dialogue and performance of Randall Goldfarb ‘16, whose bigoted nature I quickly grew to detest. Arguing over the plight of the white male in a room of women, blacks, and one homosexual man, his dialogue hit the ignorance involved with white supremacy right on the head, while also drawing in timely, related issues of oppression such as sexism and homophobia.

Overall, this was a play worth seeing, and one that I would like to view again with the knowledge of the era shift in mind. Each cast member’s rendition of this hot-topic debate, ignited by spark of quick-witted humor, truly made for a noteworthy performance.