A comedy-packed fantasy with a ‘heartfelt story,’ ‘She Kills Monsters’ debuts tonight 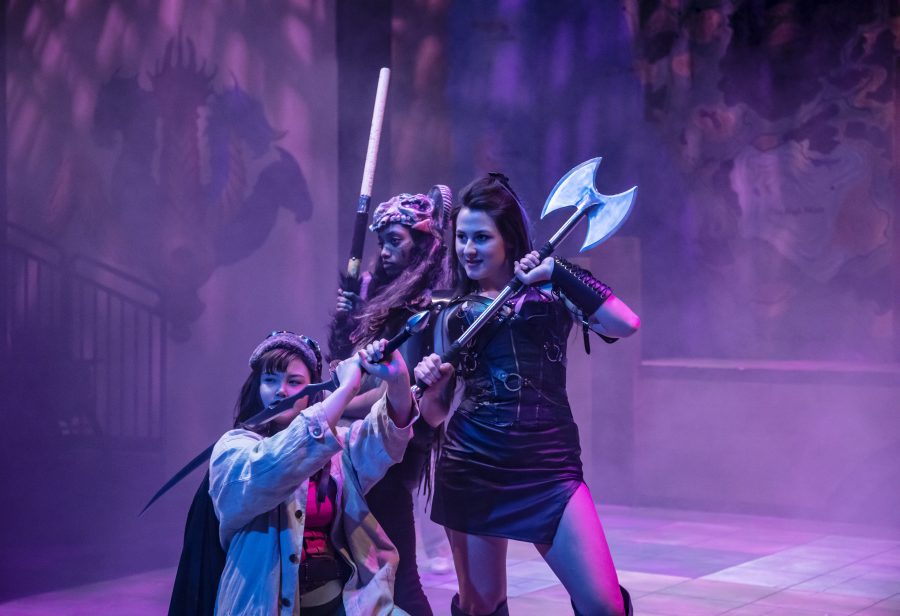 “She Kills Monsters” is exhilarating, fast-paced and incredibly fun to watch. At the center are the leads Emma Kay Krebs ’20 and Paris Doherty ’21. The entire show relies on their chemistry, which abounds.

The show is wrapped with incredible set design, costume design, and fight choreography. The lighting design for the show is dynamic and brings you into the fantasy world of the show. The set design looks like it’s pulled right out of the pages of “Lord of the Rings” and the fight choreography is kinetic and unlike anything I’ve seen on this stage. “She Kills Monsters” is definitely worth seeing.

After attending the Wednesday dress rehearsal of the theater department’s upcoming production of Qui Nguyen’s “She Kills Monsters,” I think this show is easily the most ambitious production the department has put on. It follows the story of 24-year-old high school teacher Agnes Evans whose teenage sister, Tilly, dies in a car crash. Agnes discovers her sister’s “Dungeons and Dragons” book and, through the help of a nerdy student Chuck, embarks on an epic quest to defeat the dragon Tiamat.

This show is packed with comedy, hinging largely on relatable 90’s references. While some references are stitched throughout, some are overt and others take a good eye to notice. However, the show isn’t just about the laughs. As the plot moves forward and the characters unravel, the audience will undoubtedly appreciate the heartfelt story. Within the show is a story about discovery and love that will come up on you quickly and powerfully.

Under theatre professor Mary Jo Lodge’s direction, the members of the cast shine. As audience members are introduced to the characters, they will learn more as the story goes on. Each member of the cast truly brings their own nuance to their role.

Tickets are available at the online ticket office and I would rush to get them before they sell out.