Future bright for men’s basketball: Lafayette looks to next year with roster intact 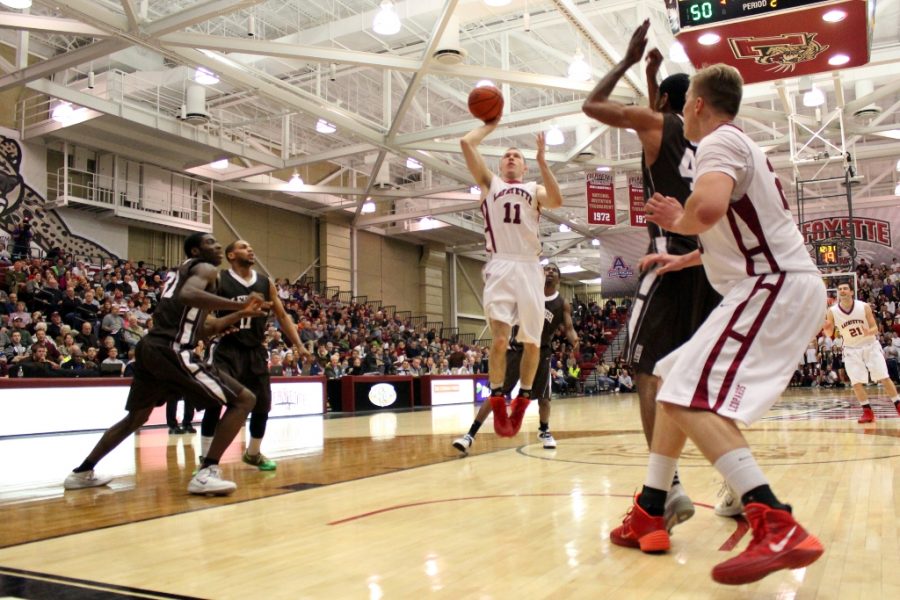 Point guard Nick Linder ’17 scores against Lehigh this season. He will be a major contributor next season.

Entering this year, Lafayette was in a unique position: it could feature the same starting lineup for two straight seasons.

“There is a lot to build on with this squad,” O’Hanlon said. “Everybody that was a contributor last year is back. What I don’t want people to think is that all starters are coming back because there will be some competition.”

O’Hanlon mentioned the play of freshmen forwards Monty Boykins and Michael Hoffman as sources of competition.

“Do they come back and work their tail off and get good minutes, even starter minutes? I don’t know,” O’Hanlon said. “It will be open for people getting minutes.”

Lafayette was hampered by injuries all season, most notably that of forward Seth Hinrichs ‘15. Hinrichs injured his left knee against Immaculata in December and the Leopards lost their next eleven games.

As a result, they fell in the league standings and wound up ninth. The last eight days of their schedule were brutal – traveling to Colgate and Army to finish their regular season slate before heading to Loyola Maryland last Monday and Boston on Wednesday for the league tournament, where their season ended.

“Our January put us in that situation. Eight days in four different cities. If we are healthy, we aren’t in that position,” O’Hanlon said.

The attention now turns to training with the season in the rearview mirror. Players will return home for Spring Break and then begin two-hour-per-week training sessions with coaches until the middle of April.

Each player will also receive a strength and conditioning program from Brad Potts.

Season wrap up interviews have taken place between each player and the coaching staff.

“They will know from the workouts and our conversations what they need to work on,” O’Hanlon said.

One aspect that may not have been glaring but nonetheless important was the lack of a senior contributor. Think back to 2012-2013 and how Tony Johnson and Levi Giese helped lead Lafayette to the league championship game.

“There is that urgency that it is their last year,” O’Hanlon said. “When you have seniors on your team, usually that translates into them understanding that this is their last go round.”

With Hinrichs, forwards Dan Trist and Alan Flannigan, and guard Joey Ptasinski, that will not be an issue moving forward.

However, Lafayette will not be the only team returning the majority of their lineup. O’Hanlon also mentioned American and Lehigh among others that will return many contributors.

It appears with much youth and an added year of experience through an injury riddled season, good times are ahead for Lafayette, which is in still search of its first league championship and NCAA Tournament berth since 2000.