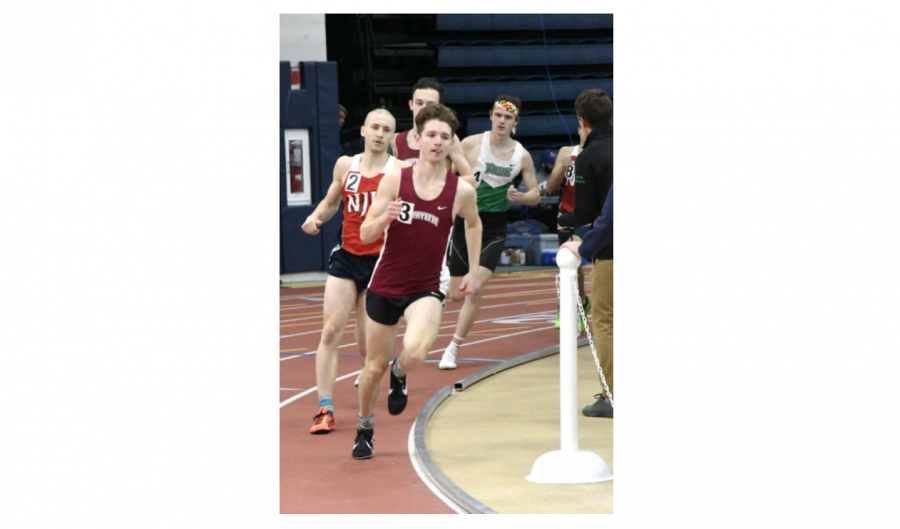 This past weekend, select members of the Lafayette track and field team competed at the ECAC/IC4A championship meet in Boston, Mass., and recorded multiple top finishes including a new school record in the mile run. In order to compete, athletes were required to reach a distinguished benchmark during the indoor season.

According to senior Caroline Harmon, her required mile time was close to the five-minute mark. Harmon proceeded to earn 19th place in the mile run with a time of 4:54.88 to break her own school record which she set earlier this season.

“The mile [record] has been in my mind since sophomore year, so it’s something I’ve been working towards with my coaches and with the help of teammates,” Harmon said. “It’s great to see all of the hard work pay off and to know that I was able to accomplish my goal, that’s something that is really special.”

For sophomore Samuel Fishbein, he had to register a throw of 17 meters or further in the weight toss in order to qualify for the meet. Fishbein’s best mark on the afternoon was a 17.01 meter toss which earned him 12th place.

“This indoor season was just about all I could have asked for,” Fishbein said. “I improved by over 10 feet in the weight throw and got a bronze medal at the Patriot League Championships, which was a major goal of mine.”

Rounding out the contributors were sophomore Harrison Greenhill, junior Calvin Schneck, and freshman Tim Payne. Greenhill earned ninth place in the shot put with a 16.35 meter throw, and Schneck recorded a personal best time of 2:29.65 in the 1000-meter run, finishing 13th. Payne’s 8.40 second dash in the 60-meter hurdle preliminaries was good for 14th in the event.

“It’s nice to get to be one of the few people representing Lafayette at the IC4A Championships,” Fishbein said. “Obviously, our team wants to be in a position where we are sending more people to the meet, but it is still great to go and compete against the best athletes from all kinds of northeastern schools.”

With the indoor season having wrapped up, the team has now begun to transition to training for the outdoor season, according to Greenhill.

“I am looking forward to carrying the momentum outdoors, where I’ll get to compete in some higher caliber meets and compete again for a Patriot League title,” Greenhill said. “In my eyes, this means relying on improving my technique, lifting hard, and keeping my body healthy through the end of the year.”

As such, Fishbein and Harmon have set new goals to accomplish, including winning a key matchup with Lehigh in early April.

“I want to do everything I can to help the team beat Lehigh on April 6,” Fishbein said. “That means beating everyone from Lehigh in the hammer, shot put, and discus.”

“Afterwards, it’s all eyes on a Patriot League title in the hammer throw,” he added.

For the seniors on the team, this upcoming spring slate will be their last time they get to wear the Maroon and White, something that has not been lost on the players.

“My main goal is to place on the podium, meaning placing top three at the Patriot League Championship, whether it’s in a relay or in an individual,” said Harmon.”But outside of that meet, Laf-Lehigh is always fun, and it’ll be our senior day, and it’ll be my last one. It will definitely be emotional but it’ll be fun.”

In addition to the rivalry meet and a packed schedule, the upcoming outdoor season presents plenty of opportunities for the team to grow and to get better.

“I’m excited for the spring,” said Harmon. “I think we have a lot of potential and especially with all of our younger athletes, it’ll be a good season.”

The full team will return to action in two weeks for the Vertklasse meet in High Point, N.C.