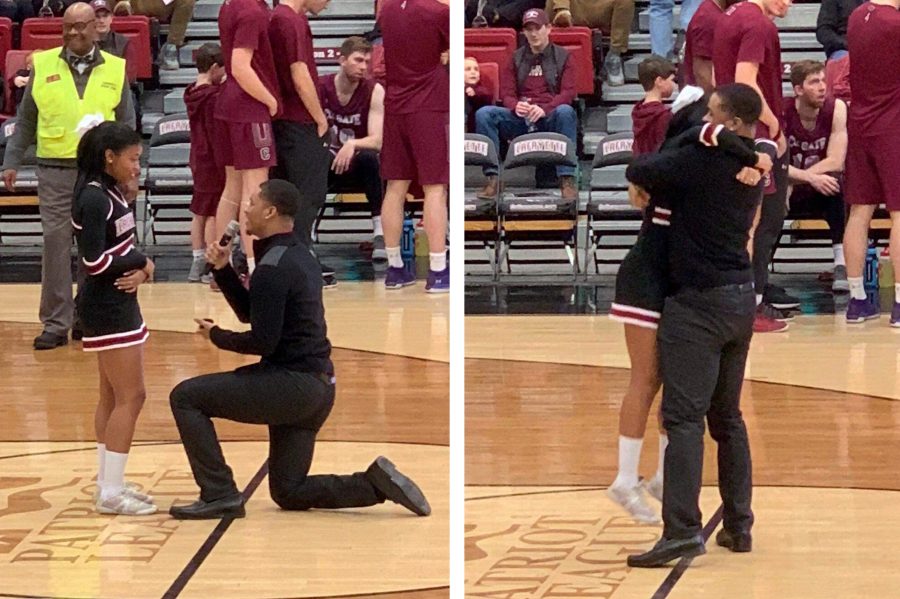 My’Kelya Dickerson ’19 was reluctant to participate in a free throw competition against her boyfriend, Phil Parham ’18, at the men’s basketball game last Saturday. Parham convinced her to compete, asking her to do so again and again in the days leading up to the game. Little did she know, he was gearing up to ask a bigger question all along.

During a media timeout in the game, with three minutes to go, Dickerson and Parham lined up at their respective free throw lines, at opposite ends of the court.

As Dickerson shot her free throws, a packed Kirby Sports Center crowd watched Phil shoot just two shots, then walk back across the court. Time ran out, and she turned around to see if she had won. She found Parham on his knee right behind her, holding a ring. She said yes.

Despite the close game, Dickerson and Parham stole the show for the rest of the afternoon.

“My teammates attacked me with a big hug,” Dickerson said. “That was the first response. Then all my friends in the crowd came up and said congrats.”

The two met in the spring of 2016 and started dating in the fall. Parham played for Lafayette football as a defensive back and Dickerson cheered the team on from the sidelines.

Parham graduated last year and started school at Wayne State in Detroit. He planned to fly in for the weekend for Dickerson’s last home game of the regular season, even before he decided to propose there.

Parham said he considered proposing at the spring football game or even at graduation, but not wanting to be cliché, he decided on the basketball game.

“I figured I wanted to do it big, so I emailed [Athletic Director] Sherryta Freeman,” Parham said. “She was all for it. She talked to [athletic communications director] Scott Morse. They set up the free throw competition. I wanted to do something during a timeout, like an announcement, but the free throw idea would be more memorable and funny at the same time.”

My’Kelya said she was hesitant about the free throw competition, but had no idea what Phil was planning.

“Phil had asked me about it a few days before,” Dickerson said. “He said we were going to be in a free throw contest and I was like, ‘No.’ He just kept saying it every day. When I got to the game, I saw him talking to the Crazy Beard Guy [public address announcer for special events], so I thought, ‘I guess we have to play the game.’”

Parham said it took him about two weeks to set up the event and buy the ring. With the big moment approaching, he wanted the game to be close so that as many people as possible could be there. The teams delivered, as the game was close down the stretch with just five points separating the two squads.

“I was pretty cool up until six or seven minutes left, then I started getting nervous and started walking back and forth,” Parham said.

“I was still nervous [as the clock got under four minutes], but when they stopped it and I got on the court, I was perfectly fine,” he added.

Dickerson’s determination to win kept her from noticing what was going on around her, she said.

“I was shocked,” she said. “I was really focused on the free throw competition and I was determined to win. I turned around to see how much he scored and he was on his knee.”

“The actual proposal was a surprise to me, we had talked about marriage in general, but not specifically when,” Dickerson added.

As for the wedding, the couple hadn’t put too much thought into the particular date.

“I don’t know,” Parham said. “It’s looking like after I graduate from college, so maybe the later half of next year.”