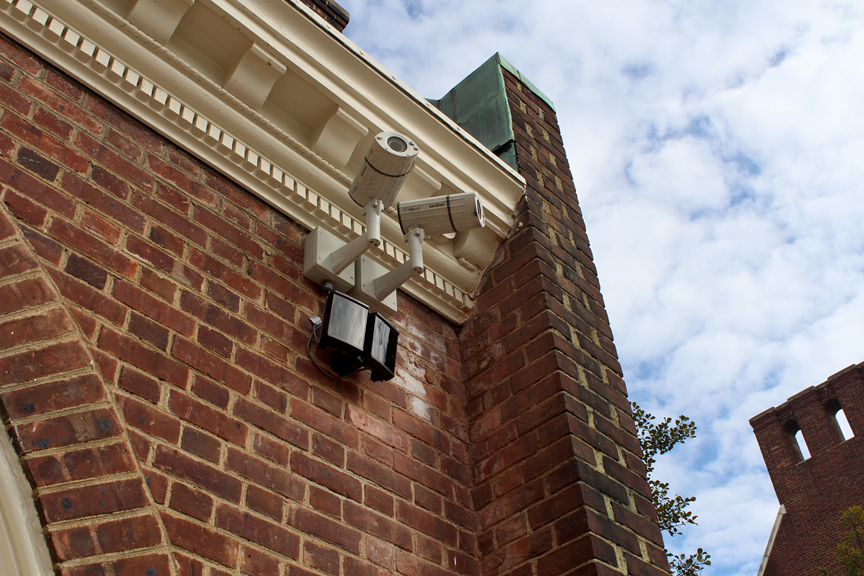 New security cameras were installed on the outside of McKeen Hall.

New security cameras were installed on Gates Hall, McKeen Hall, and outside the Williams Arts Center this winter, adding to a multitude of cameras that already exist on Lafayette’s campus.

Public Safety said they expanded cameras in those areas because they receive heavy foot traffic from the Lafayette community.

“Society in general is using more closed circuit TV [CCTV] than ever, and we’re a reflection of that,” Hugh Harris, acting Director of Public Safety, said.

Harris asserted that increased CCTV surveillance is meant to create a safer environment for students by deterring crime as well as solving incidences where crimes have been committed.

Public Safety originally began their initiative to increase video surveillance only on parking decks, where students felt unsafe at night and where cars were prone to vandalism. The first CCTV installation, Harris recalled, was about 25 years ago overlooking the Markle Parking Deck. Incidences of smashed car windows and stolen items had been reported, and the cameras were believed to aid in preventing crimes as well as apprehending offenders.

Other cameras installed later helped to protect and monitor valuable items on campus, such as the Marquis de Lafayette statue by Colton Chapel.

Today, there are a total of 118 cameras on campus.

Harris asserted that the security camera system is “very visible; we’re not hiding it.” He pointed out that at campuses across the country, colleges and universities have similarly been installing more security cameras, although on a much larger scale than at Lafayette. The starkest increase in video surveillance occurred at the University of Kentucky last year, where they increased the number of CCTV cameras from 30 to roughly 2,000.

Harris guarantees footage will not be misused in any way and is not constantly monitored. It is recorded, but is only immediately visible on a screen at Public Safety’s reception desk, rotating between three and seven feeds at a time.

“I don’t want people to get the impression…that we’re watching them all the time,” Harris said. There are no cameras in residence halls, Harris said, nor does Public Safety intend to install any inside. Cameras outside viewing entrances may be installed in the future.

Changes in the future will most likely be to replace the black and white analog cameras with digital color cameras. Public Safety is also contemplating more surveillance over the quad and around Fischer Field.

No changes are expected to be made before the next fiscal year, which begins July 1. However, Harris said students can expect an increase in the number of security cameras “over the years.”

Harris said he’s received more positive feedback than negative from students, expressing their appreciation for the system. He cited many cases in which recorded CCTV footage had helped students identify who had vandalized their property.

Parents have also expressed their satisfaction with the cameras on campus when they come to visit, he recalled.

Some students, though, say that the amount of cameras on campus today is unnecessary, and does not need to be expanded.

“I don’t have any concerns about safety as it is. I don’t believe [the level of security] needs any significant improvements,” Ivan Evtimov ‘17 wrote in a text.

Many different departments are involved in the decision-making process for adding new cameras on campus, such as the Public Safety Student Advisory Board.

“[Public Safety is] hoping that the installation of cameras will deter students from misbehaving in a Foucault self-governing kind of way,” Katria Tomko ‘16, a student representative on the advisory board, said.

Harris retired from the position of Director last year; he is holding the position in the interim while Director Robert Sabattis is on personal leave.