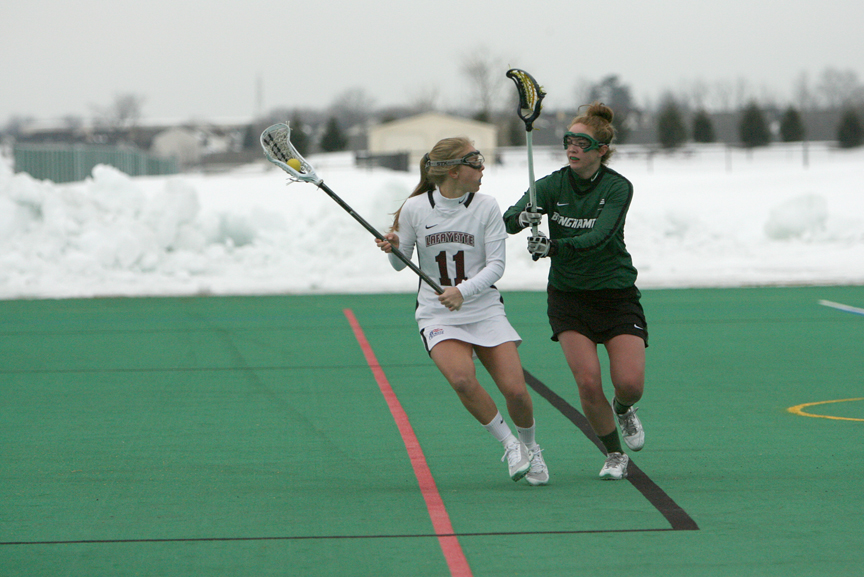 Charlotte Avallone ‘16 fends off a Binghamton defender earlier this season.

Tuesday’s 12-7 win over Central Connecticut moved the Leopards to 4-7 on the season and 3-3 out of conference. This win, however, came on the heels of a five game losing streak which included four conference losses to Navy, Loyola, Lehigh and Holy Cross. The losses put a major dent in the Leopards’ playoff hopes.

Harsh losses were dealt by first and third place Loyola and Navy, which accumulated to a total 33-17 deficit.

More recent losses to fourth and sixth place Holy Cross and Lehigh came far closer, with Lafayette falling 9-8 at Lehigh and 11-10 to Holy Cross as the Crusaders edged the Leopards in overtime.

With only four more Patriot League games to play this season, Lafayette will certainly need to look for better results to improve its playoff chances, which currently look slim as it sits second-to-last in the conference standings.

Sitting at second in the Patriot League conference with a 3-0 record, Boston University will be a necessary challenge to overcome at home on Saturday.

In spite of their strong Patriot League performance, Boston has won only one out-of-conference game, currently holding a 4-5 record overall.

Further, while the Terriers have scored a season total 74 goals to their opponents’ 97, Lafayette has managed 113 to their opponents’ 117, making strong performances from senior captains and top scorers Laura Kleiber (29) and Ana White (26) all the more important to dispatch Boston.

Kleiber and White have together totaled 19 goals in the four conference games so far, eight from Kleiber and 11 from White.

The Leopards will also be looking to hand American University its fourth loss in the Patriot League conference, who share the same overall record at 4-7, but have managed 19 fewer goals on the season and about two less on average per game.

Sitting only one place above Lafayette in the conference, American suffered three consecutive Patriot League losses to strong competition in Boston, Loyola and Holy Cross, showing them to be in a similar situation to Lafayette as the April 5 matchup slowly approaches.

Before their trip to Washington D.C., however, the Leopards will try to put their out of conference record above .500 against Villanova at home.

The Wildcats are currently 4-4 on the season and should provide stiff competition for Lafayette before their ensuing three consecutive Patriot League games.

Both Bucknell and Colgate will be in the comforts of home and represent must-wins for a struggling Leopard team going into the final third of the season.