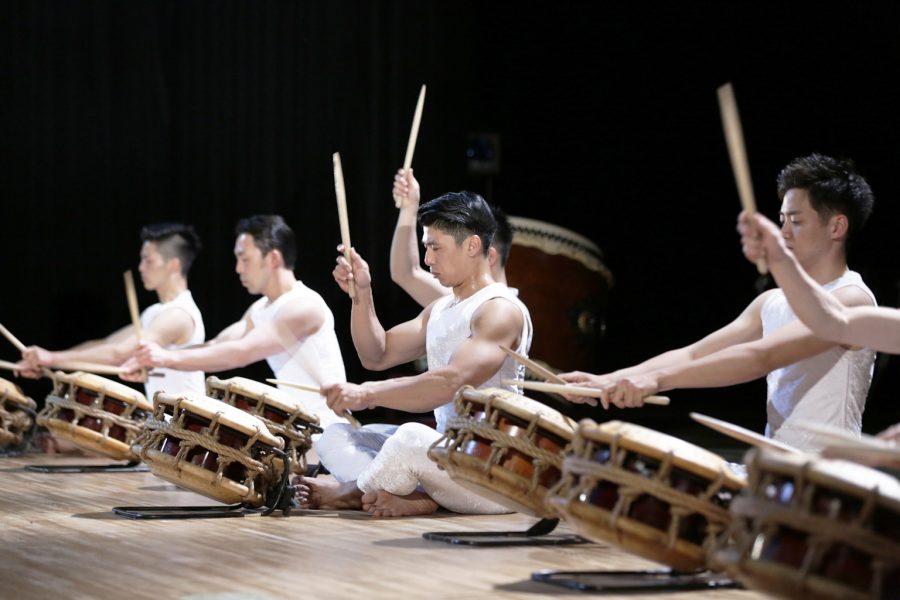 Members of Kodo live and train on the island of Sado off the coast of Japan. (Photo courtesy of Williams Center for the Arts)

The reverberating booms of a one-ton traditional taiko drum filled the Williams Center last Wednesday night. Kodo, a world-renowned taiko drum group, awed students the audience with a performance worthy of their distinction.

The group consists of 16 members and is led by newly appointed artistic director Tamasaburo Bando. Their lineup for the performance consisted of both traditional taiko ensemble pieces as well as modern fusion pieces, incorporating new drums, patterns, and drumming techniques not found in the traditional taiko canon.

The performance was as much visual as it was musical. The consistent symmetry of the stage and performers, vibrant lighting, and the movements of the percussionists themselves created a synergistic sensory experience for the audience. Meticulous choreography and the sheer immensity of many of the drums also contributed to the visual experience.

In addition to playing the drums in every way seemingly imaginable, the group also featured vocal performances intertwined with the drum performance. Floating melodies from traditional Japanese flutes made several appearances, as well.

The pieces Kodo played ranged from small group ensembles with smaller drums called shime-daikos to massive pieces involving the entire ensemble. Part of the training process for Kodo members is to make their own bachi, the sticks they use to play the drums.

The immaculate precision the drummers demonstrated during the performance did not happen overnight. In a pre-performance talk, Dr. Larry Stockton, Chair of the Music Department and specialist in traditional Japanese percussion, described the intense regiment of training that taiko groups endure to perfect their art.

Stockton recounted the first time the group visited the campus, noting that in the afternoon leading up to the performance, the group decided to run to Allentown from the college. The physical fitness of the percussionists was evidenced during the performance by the clear physical strain playing the drums entailed.

The group trains, practices and resides on an island called Sado, located off the western coast of Japan. Stockton highlighted the versatility the percussionists develop through their training, which is a process that lasts several years. He said that the group members will often switch which part they are playing between performances.

“Imagine if a violinist decided to switch instruments with a cellist,” Stockton joked. “That’s what it’s like.”

In his pre-performance talk, Stockton noted that Bando is considered a Living National Treasure by the Japanese government, which means that he is funded by the government so long as he continues to teach throughout his life.

In addition to being the arts director for Kodo, Bando is an esteemed Kabuki actor, which is a form of Japanese dance drama. Stockton noted that his history as an actor, especially as an onnagata, an actor specializing in playing female roles, has brought an interesting change to the ensemble’s style.

Kodo is a part of the broader musical movement called kumidaiko, which incorporates different combinations of drums than traditional taiko ensembles. The movement initially started in the 1950s and has grown immensely in popularity worldwide. Kodo as it exists today is the result of a split in another kumidaiko group called Za Ondekoza in 1981.

Though Kodo is one of over 800 taiko groups in Japan, Stockton said that they are “the cream of the crop.”

Their performance at Lafayette was just one of many stops in the Evolution tour, which, according to the Kodo website, aims to showcase the “perpetual creative evolution of taiko performing arts ensemble.”

This is the third time that Kodo has visited campus, and it is their 28th performance in the Evolution tour.