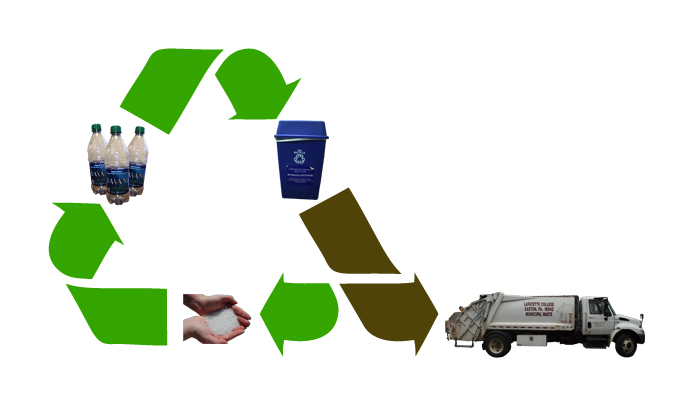 The Lafayette community is not recycling effectively, according to students and administrators on campus.

“A lot of students aren’t completely aware of how exactly the college recycles, besides your generic plastic bottles and metal containers,” Morgan McGuinness ‘14, who is in an engineering class planning more efficient recycling on campus, said. “There are a lot of things that Lafayette does recycle, and students don’t know that Lafayette does recycle them or where to recycle [them]…that’s an issue.”

The college recycles a plethora of items at different places on campus, the most apparent being cans for newspapers and glass, plastic, and aluminum containers. Once these items are recycled, they are taken down College Hill to a giant bin at Bushkill Commons, where Lafayette stores all of their recycled items. Once the bin is full, Lafayette takes the contents to a facility to be properly recycled.

Many of these cans are filled with the wrong items. Two bins outside of the Post Office on campus are dedicated to white paper recycling, which includes computer paper, magazines, and cereal boxes. Cardboard shipping containers that come into student mailboxes and newspapers are not allowed to be recycled in those bins; yet, as of printing, sections of The Wall Street Journal, which is provided outside of the Post Office, were in the bin, along with cardboard boxes used to ship items to students.

A lot of this is due to labels on containers meant for recycling. Specific cans are not labeled correctly, or the print is too small or missing information to let students, staff, and faculty know which bin is meant for which items.

Plant Operations is trying to solve this problem by improving the effectiveness of signage on the bins, but is limited due to the amount of space on cans available for signage.

This semester, an engineering course is trying to formulate a plan to make recycling on campus more efficient. The class, taught and advised by Professor of Engineering Studies Julia Nicodemus, has been researching how people recycle on campus, and how recycling is done on other campuses. By the end of the semester, they plan to come up with a proposal for a more efficient system of recycling.

One plan they are thinking of proposing is a single-stream recycling system, where all items that can be recycled go into one specific bin or bin system, which would the same at different locations around campus.

“The system [in place now] isn’t consistent across campus,” Nicodemus said. “Recycling’s most effective when it’s most convenient. So, if everywhere there’s a trash can, [and] there’s a recycling bin, [and] there’s single-stream so you don’t even have to think about whether it’s paper or plastic or glass, then all those things make…people more like to actually [recycle].”

Xiques said that Plant Operations is always looking for suggestions to improve the recycling practices on campus.

“We’re willing to look at any suggestions that come in from any area of the campus,” he said.

Director of Plant Operations Bruce Ferretti declined to comment for the article.