The Pajama Game: A polyester plot with a plush production 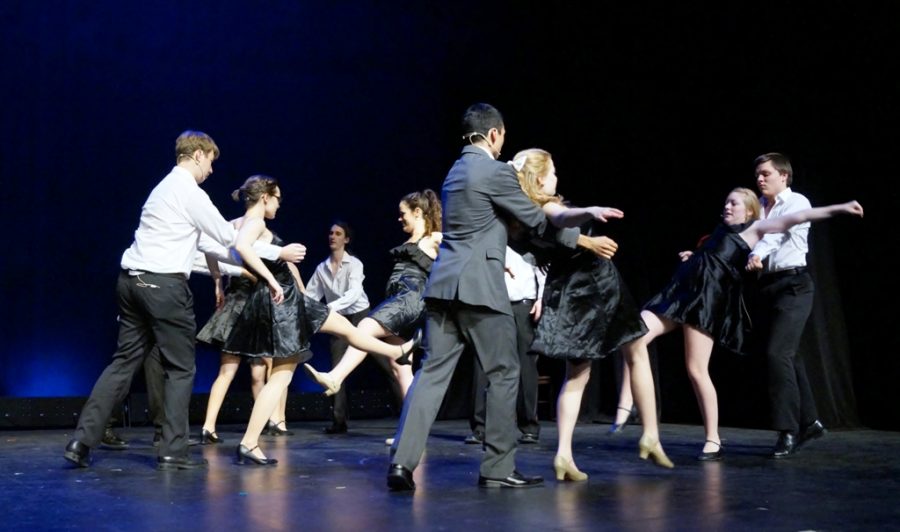 Marquis Players show off their choreography during the performance of The Pajama Game.

Drama, sexual tension, and musical numbers are the last things you’d expect to find at a pajama factory. Yet, in last week’s production of The Pajama Game, courtesy of the Marquis Players, that’s exactly what audiences got.

The play, set during the 1950’s, is focused on the plight of female factory workers. Throughout the show, the ladies unionize for a 7½ cent raise. Amongst financial unrest, they encounter other dilemmas varying from demeaning gender roles to relationship issues.

The orchestra flawlessly executed an opening number, and the storyline itself appeared to tackle deeper subject matter while maintaining a humorous, entertaining flair. My expectations of the storyline, however, were not met. While the performance itself was superb, the actual plot left me unsatisfied.

Usually when watching a performance, the audience expects to have an emotional response, whether left in a heap of laughter or with tears brimming their eyes. I was disappointed by the fact that I could not invest myself in the characters. Whatever insight The Pajama Game‘s plot lacks, however, was made up for by the stellar performance of the cast as a whole. Each actor conveyed his or her character with ease. “Everyone worked very hard, and even though many elements came together last minute, I would consider the show a success,” Kristin Curley ‘16, who played Gladys Hotchkiss, said.

Caroline Fay ‘16, the female lead, Babe Williams, held herself particularly well on stage. Singing, “I’m Not at All in Love,” she executed hardheaded claims against feelings for Sid with a personable flair. Johnny Scioscia ‘14 also gave a noteworthy performance. He played the woman-hunting infidel Prez, and delightfully enhanced the character’s mix of creepy, demeaning, and humorous traits. Performing the song “Her Is,” the womanizer courted both the eccentric secretary Gladys, and Grievance Committee Member, Mae, performed by Allie Shumeyko ‘14.

Two of my favorite aspects of The Pajama Game were the costumes and choreography. I received numerous fashion ideas of my own upon observing the actresses on stage. Each ensemble member wore colorful dresses comparable to that of 1950’s housewives. When the girls went on the “Company Picnic,” they dressed in charming tie-up belly shirts, high-waisted shorts, adorning their necks with bright handkerchiefs. Their charismatic apparel came into full effect as they twirled in dance to numbers such as “Once-a-Year Day” and “Hernando’s Hideaway.”

The conceptual basis of the show and the fluid delivery of lines had me laughing upon numerous instances. Sid’s secretary Mabel, played by Nikelia Haines ‘15, had particularly good on-stage chemistry with the factory timekeeper, Vernon Hines, performed by Danny Guadalupe ‘16. The two exchanged a catchy, humorous dialogue throughout the number, “I’ll Never Be Jealous Again.” Mabel’s quirky, mother hen attitude played well against Vernon’s hopeless, distrustful approach towards his girlfriend, Gladys.

Overall, while The Pajama Game is not necessarily a show I would want to see again for the storyline, I would certainly enjoy a second viewing based on the production itself. I was thoroughly impressed by and engaged with the Marquis Players’ performance.