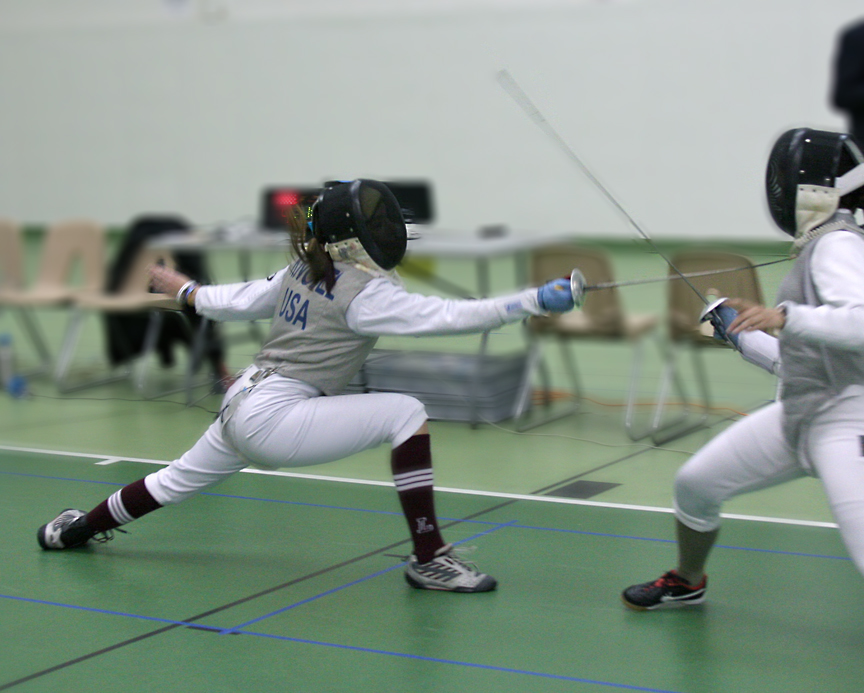 Late basketball coach Jim Valvano is known for the quote, “Every single day, in every walk of life, ordinary people do extraordinary things.” Not many ordinary people rose to the occasion more often than this year’s Lafayette fencing team, which survived thanks in large part to the addition of seven walk-ons.

After the program expanded into separate male and female teams last year, roster spots had to be filled. The team opened up tryouts to anyone interested in joining, regardless of whether the hopefuls had any prior knowledge of the sport.

“Without walk-ons, we wouldn’t have kids for roster sports,” epee David Jennings ‘16 said. “We need at least three kids in each gender, in each of three weapons – 18 kids in all – for tournaments. And even when we have enough kids we don’t necessarily have enough for those specific spots.”

Most of the walk-ons have not had any prior fencing experience before joining the D1 squad. All of the potential walk-ons go through a tryout during the team’s daily practice, in which they are taught a variety of moves and techniques. After a week of tryouts, the team votes on whether the walk-on has made it or not.

“For the guys [lack of fencers] isn’t an issue. We meet all of the requirements, despite having to swap around some of the guys,” Jennings said. “But with the girls, we don’t have enough girls to fill the spots, thus resulting in forfeiting matches due to girls being abroad or quitting.”

All of the rookie fencers have had little to no prior experience, including Carly Hatch ‘14 and Rachel Barron ‘16.

“Carly and Rachel came in, neither of whom have ever picked up a fencing sword before. Carly ended up winning two of her bouts at a tournament this season,” Jennings said.

By adding people like Carly and Rachel to the roster, the rest of the team is able to match up equally with their opponent’s talent level.

“Advance members of the team will have to play different weapons, if we didn’t have walk-ons. Walk-ons allow us to keep our advanced players in their best spot, and not forfeit matches as well,” Jennings said.

Not only are walk-ons benefiting the team by preventing automatic loses, but are exceeding all expectations these students had coming to Lafayette. Hence, the “extraordinary” Valvano spoke of.

Why did you join the team?

“I walked onto the fencing team this past semester after one of my friends who I have known since freshman year told me about it. I’d always been intrigued by the sport, but due to other commitments, never had a chance to try it. I also really enjoy trying new and exciting sports.”

Did you ever think you would be a DI athlete?

“I’ve played sports throughout my entire life, including high school varsity basketball and softball and three years of rugby here at Lafayette. Sports and athletics have always been a huge part of my life, but I never expected to compete as a Division I varsity athlete because I didn’t want to make the huge time commitment that it would require. But joining the fencing team this semester was a great compromise because of the short season – I was only technically on the team for about six weeks, a time period I was definitely willing to commit to.”

What about the team do you really enjoy?

“I always thought that fencing looked really cool, so I loved getting to learn the sport and watch myself develop from absolutely zero experience to winning bouts. While the fencing itself was great, the best part for me was getting to know the guys and girls on the team.”

Did you get equal respect due to your walk-on status?

“I think the team was fantastic at welcoming me and other walk-ons to the team. They were ridiculously supportive and patient with me, especially in the beginning of the season when I didn’t know anything about fencing.”

Why did you join the team?

“I joined the team honestly on a total whim. I saw posters around advertising tryouts and I knew David Jennings was on the team. One night I was hanging out with David and the fencing poster he had in his room triggered my question ‘Hey how weird would it be if I went to tryouts?’ That night he taught me the basic footwork and I went to tryouts the next day just to see how it went.

Did you ever think you would be a DI athlete?

“I have to say it’s not something I ever thought I would do. It is quite fun though and actually a lot more challenging and more of a workout than most people think. I don’t think the school takes it as seriously as they should.”

What about the team do you really enjoy?

“The people on the team are a huge reason why I decided to stay. If I didn’t have such good friends that make me look forward to going to practice and enjoy it, I probably wouldn’t have lasted this long.”

Did you get equal respect due to your walk-on status?

“I never felt like I was looked at as less of an athlete just because I was a walk-on. It has truly been a great experience getting to know everyone, and meeting new people.”