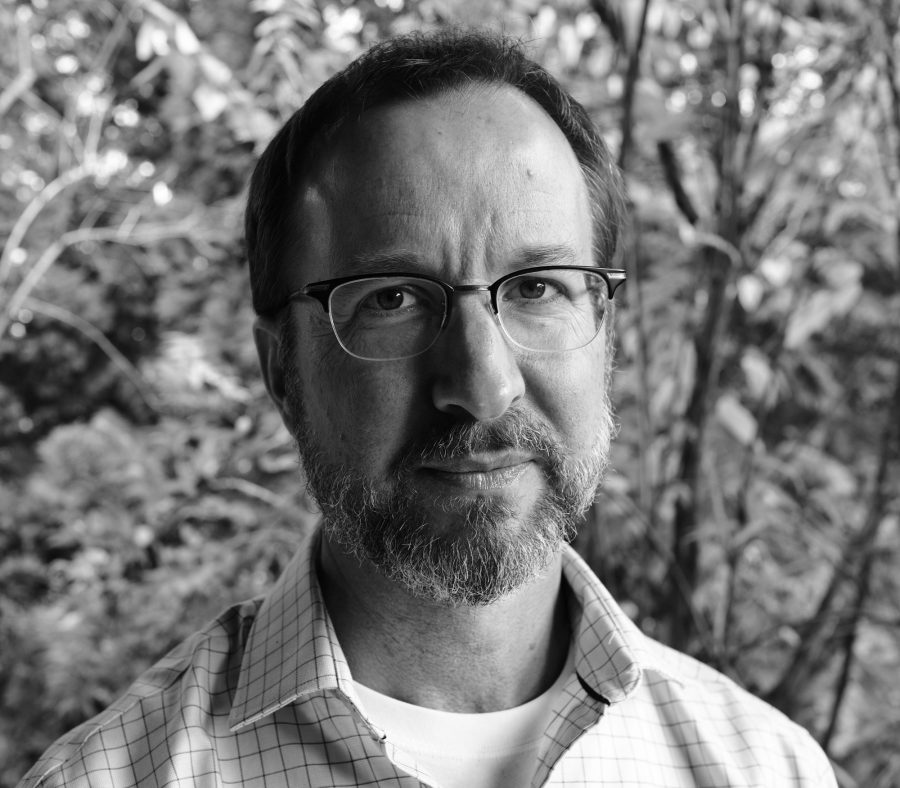 Owen McLeod talks about themes within his debut poetry collection at a reading this past Tuesday. (Photo courtesy of Owen McLeod)

McLeod’s works have been published in various literary journals, such as the American Literary Review, Yale Review, Massachusetts Review, New England Review and many more.

At McLeod’s poetry reading this past Tuesday, English professor, short-story writer and poet Lee Upton introduced McLeod and referred to his work as “marked by a brilliant range of reference, by impeccable craft, by the grade of high intelligence, wit and resident feeling…poem after poem, each individual line surfaces with energy and a cunning, sweeping, imaginative range.”

McLeod’s love for poetry is not new. As an undergraduate at King’s College, London, he spent some of his time writing poetry. However, after graduating and going on to graduate school for philosophy, he “forgot all about poetry” and “didn’t have time for it anymore,” he said in an interview.

Poetry made its way back to him in the summer of 2014 while sitting in on an english course by Professor Upton in modern and contemporary poetry, where he was learning about poets he had not studied before.

“It was the course that made a huge difference to me,” he said. “I owe a lot to Lee Upton.”

McLeod read a couple of his poems, including “Click Here to get Ripped,” “A Brief History of the Universe,” “Rocket Man,” and “Something You Left to Me.” Particularly, the poems “The Republic,” “A Brief Synopsis of Spinoza’s Ethics” and others reference philosophical figures such as Plato, Aristotle and Spinoza.

Before reading “Rocket Man,” he explained that the poem is representative of how he deals with situations in which he finds himself in a state of depression or bothered by something.

“I try to look at my life as if I was living in Jupiter or Neptune, so whatever is bothering me seems trivial and small,” he said.

While that strategy works for him, the downside of it is that “viewing from that perspective the things I love and care about also seem trivial and small, so it’s as if in order to be content I have to view the world from a great distance, but in order to love the world, I have to view it from right here.”

“It’s also about drinking too much,” he added, referring to when the speaker of the poem drunkenly steps to the yard of his house and falls asleep, to then be awakened by a jogger “just before dawn,” that fears he “might be a corpse.”

At the end of the reading, an audience member asked McLeod how his background in philosophy has influenced his writing. McLeod said that while getting ready for the reading, he realized how much philosophy has worked its way “directly or indirectly” into his poetry.

“It’s not something that I intended, I didn’t mean for philosophy to make its way into the poetry. In fact, sometimes I wish I could get out,” he said. He added that he feels that as a philosopher, he has been “encouraged” to follow a particular way of thinking.

McLeod shared that he has struggled to push past the training he received as a philosopher when writing poetry.

Although his interests lie in teaching ethics and history of philosophy, McLeod has taught the occasional seminars on God and themes of life. The concept of God appearing in a lot of his poetry is unsurprising, McLeod said in an interview.

“For me the concept of God is one that’s very useful as a literary device because it’s a place where we can…personify a lot of things that we value, like wisdom and mercy and creativity,” he said. “Even if there isn’t a God, it’s still useful for me to be able to refer to God [and] to use God as a kind of device to convey meanings.”

An audience member asked McLeod what about poetry draws him to it.

“I want to connect to the world in some way and to capture what seems to me beautiful or horrible or lovely or regrettable about it,” he responded. “And then try to share that with other people the way in which a photographer might want to capture a moment and then share it.”

“In addition to philosophy, poetry allows me to be in a world in a way where I can express [myself],” he added.