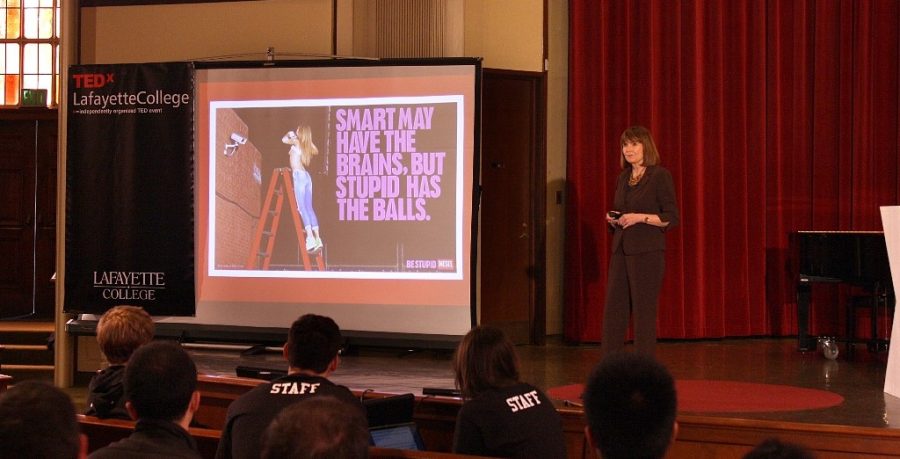 Jean Kilbourne speaks at the TEDxLaf conferences this Saturday.

Six speakers came to Lafayette Saturday from across the globe, from places as far apart as Idaho and Afghanistan, to speak at a TEDx conference, each offering divergent experiences and views consistent this year’s theme of “Connecting the Dots”.

Erin Zaikis, the first speaker at the conference, founded Sundara, a company that works with women’s co-ops in the developing world to establish localized soap recycling efforts. Creating a sustainable source of soap is critically important in combating childhood disease in the world’s most vulnerable countries. Sundara also provides education, economic opportunities, and, most importantly, allows those in impoverished countries access to soap and to “take health into their own hands.”

Isaiah Hankel spoke second, discussing his life progression, eventually running a successful business, traveling the world, writing books, and connecting with people in a meaningful way. His transformation relied on an emphasis of writing down goals so they become a part of everyday awareness, which he said assisted greatly in achieving his goals.

“Anything is possible when you start with the end in mind,” he said.

The third speaker, Jean Kilbourne, focused on how women are sexualized in advertising. A longtime activist, Kilbourne explained how women are being falsely portrayed in today’s advertisements. She contends the ads do not accurately represent how real women look and portrays them as things or objects.

Matthew Trinetti, the fourth speaker, traveled to Iceland and bounced around Europe for seven months, after taking a sabbatical from his job. Inspired by the tragedy of a close friend’s death in a car accident, he set out to travel, and found he was traveling on a spiritual journey, as well as a physical one. Trinetti said he left his life of probabilities to explore a life of possibilities

The final TEDx speaker was Heather Greer, a humanitarian and documentarian who said she connects people through story. Greer emphasized the importance of empathy in her life and in her work. She defines empathy as “the subtle exchange between people of equal importance.”

“If apathy shuts you down, empathy cracks you open,” Greer said after the conference.

Between 150 and 200 people attend the TEDx event, and most student reactions were positive.

“It’s really cool that the speakers intermingle with the people who came to listen,” Marci Weinstein ‘17 said. “I like that they come for free because that means that they are actually passionate about what they do, instead of just doing it for the money.”

Videos of the speeches will be available online in about a month.