Lights out on Old Ingrid? 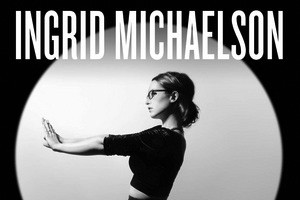 Ingrid Michaelson’s voice emits an essence that can instantly put her listener in a better mood. Hercathartic lyrics have a cathartic quality that make listeners feel as if they were listening to songs written about their own lives.

The tone given off by Michaelson’s new album Lights Out (released April 15) is no different. However, Michaelson took some risks with her new songs by dropping her typically acoustic sound and giving fans a new vibe to enjoy.

While changing what was already perfect seems a bit risky, I think Michaelson pulled it off effortlessly. Even her single, “Girls Chase Boys”— which sounds a bit more auto-tuned and dance party inspired than I’d expect— had me singing along after just the third listen.

After hearing singles “Time Machine,” and “One Night Town” (ft. Mat Kearney), I feared Michaelson had walked out of the quaint coffee shop and into center sweltering spotlight with upbeat and heavily instrumental accompanied pieces. However, similarities to her old album, Everybody, gave me hope that some of the old Ingrid remained. Songs such as “Open Hands” (ft. Trent Dabbs) and “Over You” (ft. A Great Big World) have more similarities to old classics like “The Chain” and “Keep Breathing.”

Michaelson’s album includes multiple collaborations, including songs with A Great Big World, Storyman, Mat Kearney, Trent Dabbs, and husband Greg Laswell. The song with Laswell, “Wonderful Unknown,” had been released in February with a music video. She shot and edited the video herself, with footage taken from a walk through her Brooklyn neighborhood. The barebones music video is exactly what was needed to assure old fans that Michaelson wasn’t completely changing.

My initial concern of having to find a new artist to turn to for relatable and relaxing tunes was put to rest, as Michaelson once again did not disappoint. By the end of the album, I came to appreciate the way her new sound offset the more laid back songs I’m used to.

Ultimately, Michaelson’s lyrics about love and self-identity accompanied her flawless harmonies to create a well-balanced new album. I am absolutely certain I will be purchasing tickets for Michaelson’s “Lights Out” tour this summer, and I’m looking forward to seeing both Old and New Ingrid take the stage.