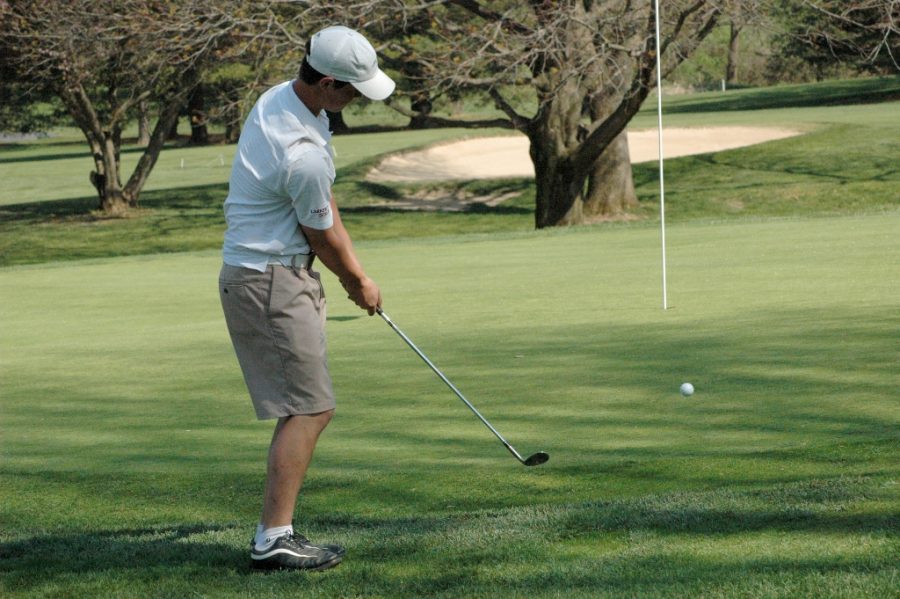 Junior Mike Zausmer will be key for Lafayette Golf this weekend at Patriot League Championships.

This past fall, the Lafayette men’s golf team played the twelfth hole at West Point, NY and it got the best of them: 23 over par in the span of three days. With a narrow tee shot and false front green, this 398-yard hole proves the course in West Point is a force to be reckoned with.

“There are hazards on both sides of the fairway,” freshman Jared Mactas said. “You only have fifteen yards [wide] to land it and it’s an intimidating tee shot with an elevated green. If you don’t hit the fairway, you’re taking a penalty shot.”

When Mactas played it in the fall at the Stars and Stripes invitational, he carded a quadruple bogey, double bogey, and bogey in three rounds of play on the twelfth hole.

This weekend, the men’s golf team will travel to West Point for the Patriot League Championship. There, the twelfth hole awaits. The course measures only 6036 yards from the championship tees and is a par 70. Despite its length, West Point is a demanding course that forces players to play smart positions.

“West Point is a very challenging golf course,” junior Mike Zausmer said. “It’s not going to reward those that take a hole or two off. You’ve got to play smart.”

One challenge that the team will have to overcome this weekend is that this is the first tournament all season with 36 holes in one day. This will test the players’ conditioning and stamina. Their iron play will be another aspect tested.

“It’s a short course, a par 70, which means there are a lot of par threes,” coach Jim Hutnik said. “There are six par threes on the course, so you got to be able to hit good iron shots. It’s a mountainous course with lot of elevation changes. You got to be able to pinpoint your irons. It’s going to be a challenge.”

Mental toughness will be key.

“I want to develop a good thought process and routine,” Zausmer said. “I would like to worry less about the results and more about the thought process. I’ve been hitting the ball all right; recently it’s been the putting that’s been getting to me. A lot of that is mental and to play well this week, I have to putt well. It’s a big mental grind.”

Putting well seems to be the key to success at any level of the sport. Two Sundays ago, Bubba Watson was able to capture the green jacket at the Masters for the second time. In his final round, he had 25 putts, placing him third in the field. Last weekend at the RBC Heritage, Matt Kuchar was able to fire a final round seven-under 64 to solidify a victory. Kuchar had 27 putts in his final round.

“My biggest problem this season has been developing a sense of momentum,” Zausmer said. “Any golfer knows that momentum comes from making putts.

“They have composure,” said Zausmer. “It’s tough for every golfer to keep it. The guys on tour understand that they can win. Bubba Watson held himself together. He wasn’t thinking about winning on fifteen, he was thinking about playing the fifteen.”

The team will hope to find its composure for this weekend and mimic Bubba and Kuchar. There may be no green jackets available, but that spot atop the leaderboard will be.