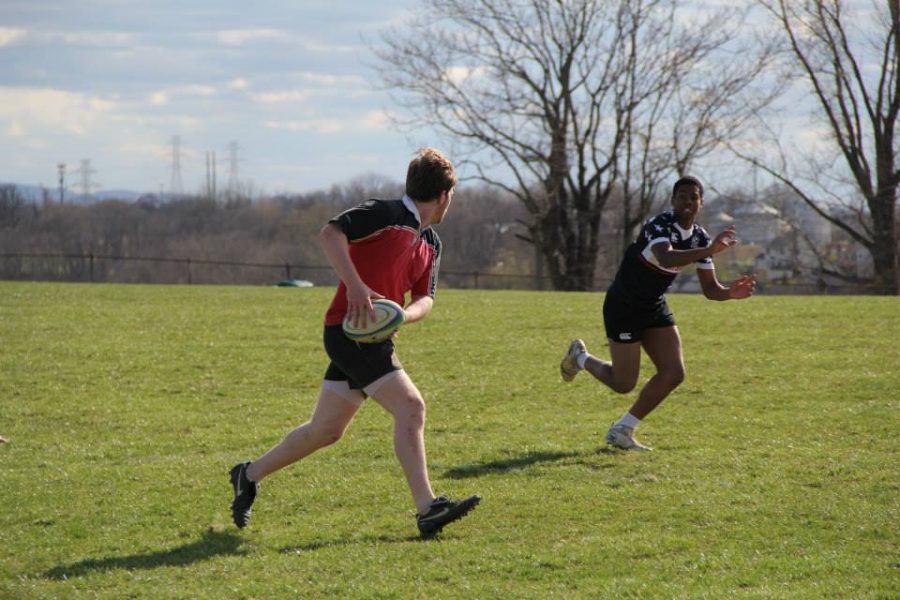 The score was 19-15 in favor of Lafayette, but Albright University was inching closer to scoring. It was the moment that players dream of, when one play from either side could determine the outcome.

In this case, it was two fleeting moments.

Captain Brandon Yauch ‘14 watched his Albright opponent sprint towards him and knew what was at stake: a championship berth in the National Small College Rugby Organization 7s Qualifying Tournament. Win that championship, and it’s onto the national championships in Philadelphia. They’d make Lafayette rugby history.

He tackled his opponent, but Albright passed it backwards and attempted one more toss. Each score, or “try,” is worth five points, making this a pivotal moment. Yauch quickly rose to his feet.

“I made another tackle out of bounds and the game was over,” he said smiling widely. “I’ve never felt happier in my life. I jumped on my teammates and said, ‘We’re going to the ship!’”

For Yauch, one of five seniors on the team, this victory was especially sweet. But what came next was even better: an absolute 36-7 blowout against Lord Fairfax Community College. “Everyone was completely silent the whole time during breaks,” Yauch said. “We knew we just needed to execute.”

Mission accomplished. Lafayette rugby was onto the spring national championships. Those five seniors would attend as spectators in past years, but never players. Now they’re preparing for the May 31-June 1 National Small College Rugby 7s Championship.

While traditional rugby is played 15 on the pitch and lasts 80 minutes, the game of sevens includes seven players in seven-minute halves. The entire match is basically a sprint. “It’s 14 minutes of hell,” Yauch said.

Transitioning from a team that primarily plays the traditional game into a team just as dedicated to sevens has been eased by the guest coaching of Amos Signes, known as one of the world’s best sevens coaches. Head coach Daniel Benedict, or “Benny,” first brought Signes to practice this past fall, when the team first made it to nationals, to help the players tailor their skills to sevens. Now, months later, the team agrees that Signes was instrumental in their success sevens.

“You could tell the seniors were just ecstatic,” freshman Will Riley said. “It was almost surreal to them. They were very emotional. It was good to see. I was happy for them especially because this is always something they have dreamt of going to. We are going to something they watched in awe.”

President Owen McCann ‘15 has played with those seniors for three years. “Seeing them win and going out there and getting to congratulate them and play with them has been amazing,” McCann said.

When the team first made the national championship last fall, it was nowhere near as dramatic. According to McCann, “We were fortunate enough to get a bid to nationals. We didn’t really earn it. We got invited to it. We got experience with that and we realized we had a great squad.”

The two national championship appearances have placed Lafayette rugby in elite category with their small college counterparts. Expectations have elevated significantly and the many freshmen are well aware of that. There are two juniors and five sophomores, three of which are abroad, so this year’s freshmen will be relied on heavily in future years. “[The new freshmen additions were] sort of a nice revival,” Riley said.

Lafayette does not yet know who it will play in its pool, but carries substantial confidence into the weekend long event. Let the words of Yauch speak for the team’s confidence.

“I think this is the best rugby team we’ve ever had. Period.”