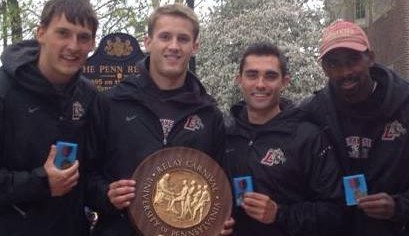 Lafayette acquitted itself in fine fashion against national powerhouses at the Penn Relays track and field carnival last weekend, paced by acknowledged stars in the women’s events. Elise Buffinton ‘14 placed third overall in the College Section of the Pole Vault while Rachel Pena ‘14 took fifth in the Championship Round of the Hammer Throw.

Both Buffinton and Pena had given notice of their lofty intentions back in March at the Eastern College Athletic Conference Indoor Track and Field Championship, hosted by Boston University. Buffinton took top honors there with a vault of 12’11 ½”, becoming the second Lafayette woman to win an ECAC Track and Field crown.

At the same time, Pena earned All-East honors in the weight throw for the second year in a row, finishing third in her event with a 61-foot toss.

But it was the men’s 4×400 Relay team that seemingly came out of nowhere on Friday against contingents from the SEC, Big 10, ACC, and Big 12, winning their heat and earning 50th place in their event out of 90 high-profile college programs. Comprised of Neil Franzese ‘14, Tim Shaw ‘14, Jarrel Bobb ‘16, and Chris Castello ‘16, the relay squad put together its best performance of the season with a time of 3:19:44.

“This was actually the first time Tim and I had the chance to compete at the Penn Relays,” said Franzese. “Needless to say we were extremely excited. I remember just looking up in the stands and seeing the 30,000 people that were there and saying something like, ‘Let’s take this all in and just have fun with it.’”

Franzese, who led off the relay and passed the baton to Shaw, had the chance to watch the rest of the race while his teammates competed.  “We were fourth going into the last leg,” he recalled. “and Jarrel really gave it everything he had. He really brought it home for us.”

Previously, the team had come in second in the 2013 Outdoor Patriot League Championships. However, its success in the Penn Relays took place on a much bigger stage.

“This outdoor season has been the best in my four years here,” Shaw said. “Our win over Lehigh back in April was the team’s first outdoor win in the last four years. To win the oldest track and field rivalry in history was an awesome feeling.”

Now Shaw is looking forward to the Patriot League Championship in Annapolis (May 2-3). To his mind, “that will be the ultimate test of the last four years. Neil [Franzese] and I are both one of the top seeds in the 400m hurdles, and we have high expectations for ourselves.”

According to Shaw, the best part of his collegiate career has been “the competition. Neil and I are only 0.3 seconds apart in the 400m hurdles, and having someone to train with who is at the same competitive level you are is what drives us forward every day.

“The best part is, at the end of the day, we don’t care who ends up on top of the podium, as long as it’s one of us.”