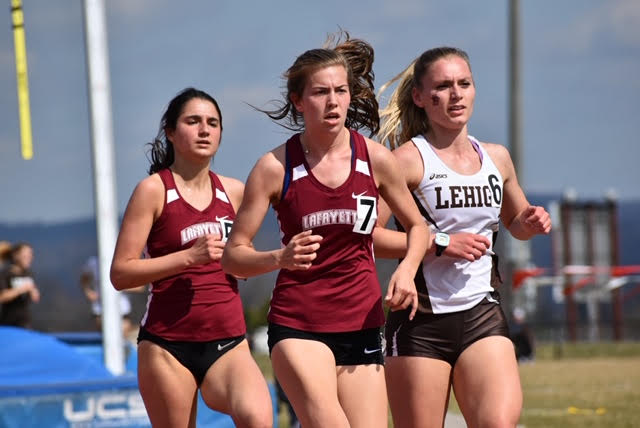 The men and women combined to win 15 events against Lehigh. (Photo courtesy of Athletic Communications)

This past weekend, the Lafayette track and field team faced rival Lehigh in a dual meet, with the men emerging victorious by a score of 107-96 to earn the Bryan Mundy trophy. The women fell short of the Mountain Hawks, losing 125-77.

“It was a real team effort from everyone,” said sophomore Tyler Hubeny. “I’m very proud of our team, everyone ran their hardest.”

Sophomore Sam Fishbein won both the discus and hammer throw, winning the hammer throw by over six meters with his 56.42 meter toss, which qualified him for the IC4A championship in May.

According to Hubeny, the IC4A meet is “more selective,” and “shows how good our team is and how far we’ve come.”

Sophomore Brian Kaufmann also notched two victories on the afternoon, coming in first in the long jump with a best leap of 6.79 meters and later winning the triple jump with a 13.69 meter mark. Kaufmann earned Men’s Field Athlete of the Meet for his efforts. Classmate Jermaine Rhoden earned another first place finish with a top mark of 1.97 meters in the high jump.

Sophomore Harrison Greenhill finished second in the discus with a throw of 40.66 meters, just behind Fishbein’s toss of 41.91 meters. Greenhill won the shot put later in the afternoon with a top mark of 16.28 meters, over two meters further than the second place finisher, which also qualified him for IC4A’s.

Freshman Timothy Payne won the 110-meter hurdles in 14.50 seconds, earning an IC4A qualification in the process.

In the running events, senior Thomas Strand recorded two wins, finishing first in both the 200- and 400-meter dash and adding ten points to the Leopards’ total. His winning time of 49.09 seconds in the 400-meter event qualified him for IC4A’s, and also earned him Men’s Track Athlete of the Meet.

The 4×400 relay team won the event with a time of 3:20.80, and junior Calvin Schneck rounded out the first place finishers for the men with a win in the 1500-meter run, scoring five points.

Senior Caroline Harmon emerged victorious in the 1500-meter dash, scoring five points with her time of 4:39.47. Freshman Autumn Sands and sophomore Gabrielle Galletta finished in first and second place, respectively, in the 5000-meter run, combining to score eight points. The 4×400 meter team also picked up a win for the Leopards.

Freshman Jillian Warabak took home the win in the 100-meter hurtles by a narrow margin of just 0.01 seconds ahead of the second place finisher from Lehigh.

“It was a very high intensity and very energetic meet,” said sophomore Katie Ullmann. “It’s one of the few times we can go face to face with our competitor [Lehigh University].”

“Even those who were not competing were there to cheer people on,” she added.

Next up for the Leopards is a busy weekend wrapping up the Mondschein Multi, which started yesterday, as well as competing in both the Bison Open and the Coach P Open today and tomorrow.