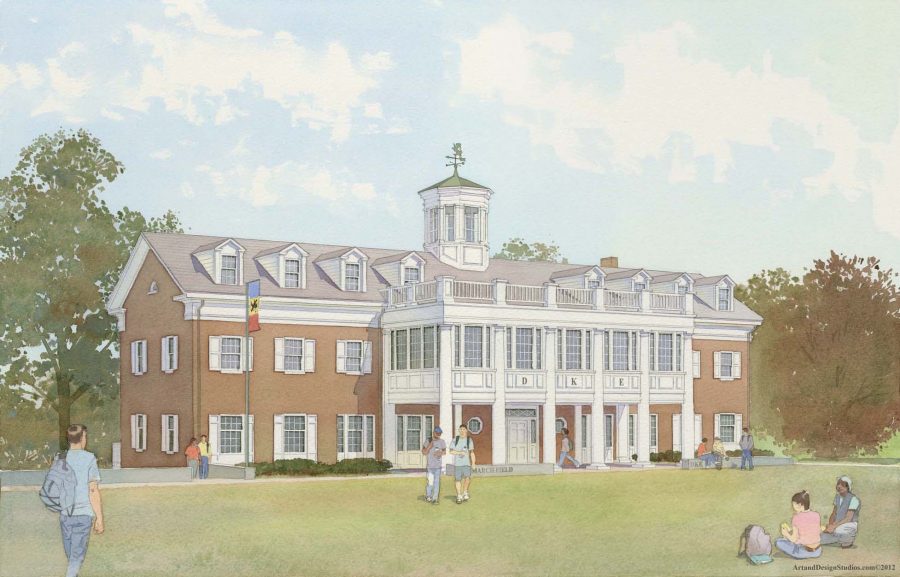 Rendition of the DKE house after renovations. Lafayette and DKE’s Rho chapter plan on investing in additions and renovations to DKE”s house, located on March Field.

Members of Delta Kappa Epsilon may return for the fall semester to a house under construction if they receive approval for a multimillion dollar renovation project.

DKE’s Rho chapter and Lafayette plan to invest in renovations and additions of the DKE house on March Field to provide new accommodations for its members. The project is subject to approval from the Board of Trustees later this month, according to President of Rho House Association of DKE Michael De Lisi ‘03, who fully expects the renovations to be endorsed.

Organizers of the project plan extensive changes, including expanding rooms to accommodate up to 200 visitors and new dining facilities.

“The interior of the 1st thru [sic] 3rd floors will be completely demolished and replaced with all new construction, including finishes, mechanical, electrical, fire protection and plumbing fixtures,” Director of Facilities Planning and Construction Mary Wilford-Hunt wrote in an email.

Renovations will cost over $4 million, according to Wilford-Hunt. The college will pay the base cost of the entire renovation and trust that DKE contribution quotas will be filled, according the Rho DKE 160th Anniversary Campaign’s website.

The college plans to obtain required funds from a “modest portion” of proceeds from long-term, fixed interest rate bonds issued last fall, according the Vice President of Finance and Administration Mitchell Wein. DKE and their alumni association will finance $800,000.

“A renovation is required to bring the building up to Lafayette College’s standards, especially since students living in the DKE House pay the full housing fee to the College,” De Lisi wrote in an email.

DKE alumnus Bob Loughlin ‘53 wrote in a statement on the campaign’s website that the condition of the house shocked him, saying it was “shabby” and “out of date.”

“As a proud supporter of [the] initiative [to renovate the DKE house], I am extremely pleased with the forethought and cooperation demonstrated thus far and expect we will receive nothing short as we proceed in this much needed endeavor,” DKE alumnus Steve Rosen ‘02 wrote on the site.

“It’s going to look beautiful and I hope it is indicative of what we’ve been a part of this community,” DKE Treasurer Kevin Fasano ‘15 said.

Fraternity members have been working hard to raise money for the project.

“We’ve been working with our alumni advisor and the other alumni, as well as with the undergraduates to help raise money…to fund the project as best as possible,” DKE President Brett Lederer ’15 said. Members of the fraternity have held “phone-athons” whereby they inform alumni since the Class of 1960 of the chapter’s plans.

Construction is planned to begin after Alumni weekend, on June 9, and finish in August 2015 in time for student move-in and the 160th anniversary of the Rho chapter of DKE.

DKE Members will live in off-campus housing as well as the old Kappa Delta Rho house during the 2014-2015 school year.