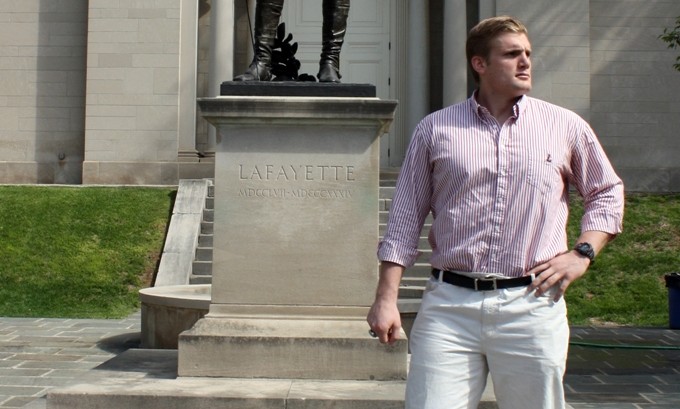 When Brad Bormann ‘14 signed the dotted line of his contract as a high school senior, committing his next four years to playing football at Lafayette College, he had a plan. “‘I want to be big,’” he recalled thinking. “‘I want to go here and have a really big impact on this place. I’m going to light this place up.’”

He arrived on campus as a freshman pre-med student from Flemington, N.J., majoring in biology and minoring in English.

Though the majority of his days would be scheduled with classes, labs and practices, Bormann sought out more. In the first few days of his freshman fall semester, he ventured into the Landis Center and found a program whose schedule worked with his own: Adopt a Grandparent at the Easton Area Senior Center. Bormann describes one of the senior citizens he spent time with each week, George, as one of his “most special friends” that he has made at Lafayette. George is 94 years old.

“He kicks my butt at ping-pong,” Bormann said with a smile. “Just vivisects me.”

Bormann later extended his volunteerism into a gerontology research scholarship.

He reflects on his four-year relationship with the seniors as a “wildly, mutually, impactful experience.”

His success in the classroom, in football and days at the senior center were satisfying, but Bormann was still looking for more.

“I’ve benefitted so much from my peers here,” Bormann said. “For me to turn around and be able to extend invitations to people… made me very proud.”

Another highlight for Bormann during his Lafayette career was going abroad on two interim trips: Kenya and Tanzania in his sophomore year and Germany and Italy in his junior. They were extremely different, but both were “outstanding.”

A favorite memory of his was during the second trip. After a group dinner out in Rome, the group dwindled down until only Bormann and the professor of the trip, Dr. Dubischar, were left.

“He confessed to me that he didn’t know much about football,” Bormann said. “So we sat there and I drew plays on a napkin for him from eight to eleven p.m. and he was so genuinely interested. In some small way, I was able to inform him a tenth as much as he was able to inform me and I was so grateful for that.”

Bormann’s senior year marked his fourth of the “struggle and hard work” of Lafayette football, which had a losing record during that time. Throughout the four years, Bormann and the players in his class “turned the program around” and “provided a cultural impact and systemic change” for the team in terms of attitude and behavior.

“We had to go out on top to make it all worth it,” Bormann said. The team won five games, including the rivalry game against Lehigh and against Fordham, the fifth best team in the country, and the Patriot League championship. It was the first time Lafayette had held the title in 19 years.

“It was almost like karmic retribution,” he said. “It was utter poetry.”

Bormann also participated as in the Experience Lafayette College planning committee since he was a first-year and was asked to be the chair of the committee for 2013 – 2014. As part of this position, Bormann gave a speech to the 1200 accepted students and parents in attendance. He remembers the talk as a “wonderful full circle closure,” reflecting on the four years past. He told his story with passion, insight, and glimpses of goofy humor.

He said to them, “Look at what I’ve been able to do. This is only a little bit of what you can do. You’re all going to come in here and do more than I did, I promise you. But this is what is possible… Look at it. Appreciate it. Take advantage of it.”

Looking forward, Bormann will be teaching biology and creating a science curriculum at a school in Newark through Teach for America. The school serves students ages 17 to 21 who read, on average, at a fourth-grade reading level. Bormann acknowledges the job will be difficult but sees this position “as the place where the most good can be done.”

After two years, Bormann will attend medical school with tentative plans to pursue emergency medicine. He has dedicated at least the start of his career to working in a hospital in a low-income area.

“I have been given ample opportunity in growing up, and as far as I’m concerned I still haven’t achieved what that ideally can allow me to do,” he said. “I’ve got to work to get that, still.”