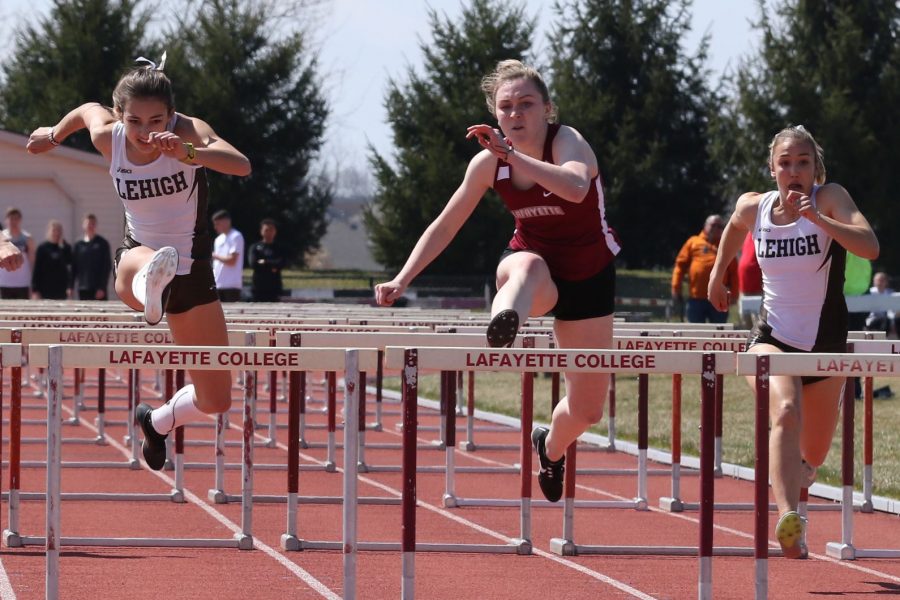 Multiple school records were broken this past weekend, as the Lafayette track and field team competed in three separate meets. The team sent athletes to Moravian College for the Coach P Invitational, Kutztown University for the Monschein Multi, and Bucknell University for the Bison Open.

Senior captain Caroline Harmon, who ran in the Bison Open at Bucknell, broke a 28-year-old school record in the 1500-meter run. Harmon’s time of 4:32.61 placed her in 27th overall and qualified her for the ECAC Championship meet in May.

“I was really happy with my performance at the meet,” Harmon said. “I’m really excited I came away with the school record, it’s something I’ve been working toward.”

The other Leopard to enter the record books this past weekend was freshman Tim Payne for his performance in the 110-meter hurdles at the Coach P Invitational. Payne broke the 40-year-old school record with a time of 14.42 seconds, finishing in first place.

Also at the Coach P Invitational, sophomore Michael Neeson won the 3000-meter steeplechase with a personal best time of 9:41:90. Senior David Sadvary finished second in the same event with a time of 9:49.12.

The Lafayette throwers and jumpers also put together strong performances in the Bison Open. Sophomore Harrison Greenhill placed second in the shot put with a toss of 15.76 meters, while classmate Samuel Fishbein finished second in the hammer throw with a distance of 54.36 meters.

On the women’s side, the Leopards stole the show in the 800-meter dash, finishing third, fourth, and sixth in the event. Senior Annika Sheehan led the pack, with freshmen Hannah McGlynn and sophomore Emily Becker not far behind.

Freshman Jillian Warabak finished fifth in the 100-meter hurdles, with a time of 14.95 seconds, and was nominated for her third Patriot League Female Rookie of the Week Award. Warabak’s hurdles time is the seventh fastest in the Patriot League this year.

In the Monschein Multi, the Leopards had a couple of top-10 finishers with sophomore Katherine Ullmann finishing fourth in the heptathlon with a score of 2605 points and junior Tyler Hubeny finishing second in the decathlon with 6403 points. Freshmen Oscar Jopp recorded an 11th place finish in the decathlon.

The team has five more scheduled meets before the Patriot League Championships on May 3 and 4.

“The team is really excited for Patriots,” Harmon said. “A lot of people have been [recording personal records] recently. Once we get rested, we will be ready to go for Patriots.”