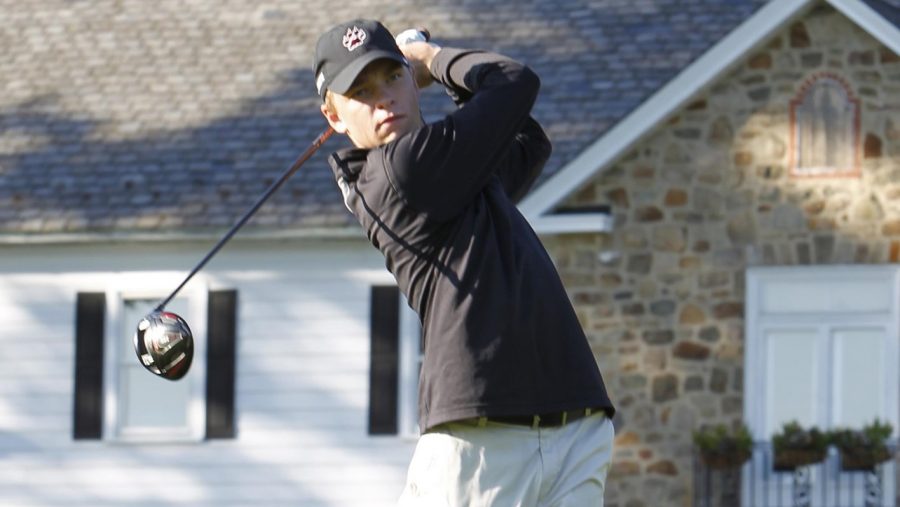 Golf rides a string of top performances and a close loss to Lehigh into the conference tournament. (Photo courtesy of Athletic Communications)

The Lafayette golf team wrapped up their regular season with a win at the Navy Spring Invitational last weekend and a close loss to rival Lehigh University on Tuesday. The two matches were the final tune-ups for the squad before the Patriot League Championship starts tomorrow.

At the Navy Invitational, the Leopards came from behind to beat out St. Joseph’s University and Binghamton University for the team title at the par-71 Naval Academy Golf Course. Lafayette sat in second place after Friday’s first round before surging into the lead of the 15-team field on Saturday.

Freshman Ryan Tall led the charge for the Leopards, finishing in a three-way tie for first after an opening round 72 and a second round 73, good for three-over par. Although Tall missed out on medaling after losing in a playoff tiebreaker, he was pleased with his effort nonetheless.

“I feel like I performed well, I was trying to make myself as close to first as possible coming down the stretch,” he said. “I knew I had to eliminate as many mistakes as possible, and that would put the team in the best position to win. That’s everyone’s goal.”

Sophomore Cole Berger finished two strokes behind Tall in a tie for sixth, shooting a combined 147 in the event. Classmate Brendan Cronin produced one the best scores of the second day, a one-over par 72 , and tied for 15th with a two-round score of 149.

Junior Will Halamandaris struggled in his first round, shooting seven-over par 78, but turned it around on day two and trimmed four strokes off his first-round total. Halamandaris tied for 22nd with a final score of 152.

Freshman Kazuki Osawa scored a 154 over the two days, finishing in a tie for 33rd place while classmate Drew Steiner competed as an individual and scored a 152 to finish in the group tied for 22nd.

As Lafayette prepares for the Patriot League Championship, the team sent a small contingent to Lehigh on Tuesday for the final regular season event of the year. The Leopards fell 323-300 to Lehigh after besting the Mountain Hawks’ team score by 31 points at the Navy Invitational.

Most players are resting for the big weekend ahead, according to Tall, and the recent success gives the team a boost heading into the postseason.

“We have been preparing all year for [the Patriot League] tournament and are ready to give ourselves the best chance to win,” he said. “Every team is right there but we’re really pleased with how we’re playing and we want to cap off a great season.”

The Leopards travel to Hamilton, N.Y., for the Patriot League Championship on Saturday and Sunday, which is hosted by Colgate University this year.

“We’re playing great, I don’t think there has been this much excitement heading into the [Patriot League] Championship in a long time,” Tall added. “We really think we can play well and win.”