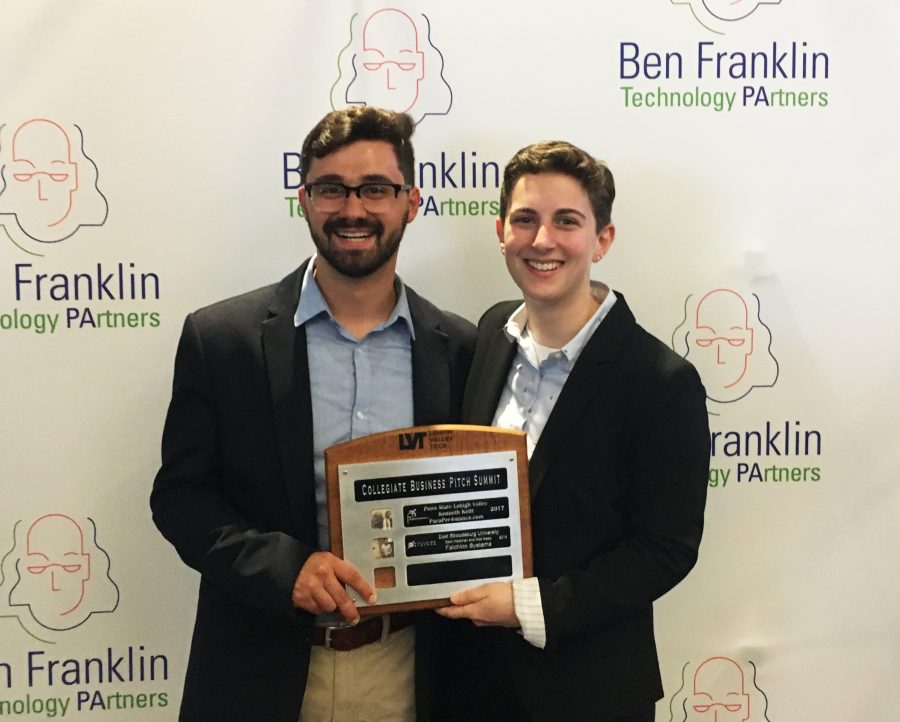 From being in a marketing class together to winning a regional startup competition pitch in the Lehigh Valley, Alex Homsi ‘19 and Becca Adelman ‘19 have come a long way together.

The pair won $2,000 at the Ben Franklin Institute last week, where they presented their entrepreneurial idea. They competed against students from different colleges in the Lehigh Valley including Lehigh University, Moravian College and DeSales University.

Before the regional competition, however, they won a contest against other Lafayette students, gaining the cash prize of $1,500 at the Dyer Center’s own startup pitch competition on April 18.

Their prize-winning business idea? An app called Coded Cup, which uses augmented reality to turn any container into a measuring device in order to measure volume.

Augmented reality gives depth perception to technology, as seen in the iPhone’s measure app and some of the Bitmoji features in Snapchat.

Adelman, a music and anthropology and sociology double major, first came up with the idea while studying abroad in Indonesia. She was trying to cook for her host family, who had no measuring cups.

“I had no way to measure ingredients for what I was trying to make. That’s what planted the seed in my head, that there must be a solution for this,” Adelman said.

From there, Adelman told Homsi, a mechanical engineering major, about the idea, who “hopped on board.”

Homsi stressed the many purposes the app would serve in everyday life. From people wanting to use the right amount of water in their oatmeal to geologists intending to carry only the exact amount of rock samples they need, the app could be used for many different reasons, Homsi said.

The app is still in development prototype phase. However, thanks to the cash prizes they have won, Homsi and Adelman intend to continue developing the app.

“Right now, we are going to use this money to get a prototype out so that we can use the prototype to demo it to investors and pay more money because making an app is very expensive,” Homsi said.

“The ultimate goal is to have it up on the app store, no bugs, ready to use,” Adelam added.

Afterwards, Homsi and Adelman said they intend to focus on “more fun” things such as marketing their app. Part of their strategy involves a future partnership with schools.

Homsi believes that Coded Cup is an helpful safety tool for college students to keep track of the alcohol content in their drinks, which differs based on the type of beverage.

Homsi and Adelman advised that students who are considering an entrepreneurial path while at Lafayette should take advantage of starting now.

“You have nothing to lose in college. You’re not going to be putting your money on it, there are students who are willing to help you for free,” Homsi said.

“If you think you could be interested in being an entrepreneur, why not just do it? Why not sit down and think, ‘This is a problem I face, how could I fix it?’” Homsi said.

The pair’s success has been encouraging as they prepare to graduate.

“The success that the business has seen in the recent weeks has made me think this is something that I’m going to keep working on post-grad,” Adelman said.

Correction: This article originally stated that Alex Homsi ’19 was a chemical engineer. He is a mechanical engineer.