An underreported crime and a changing culture: survivors of sexual assault say with improved campus climate, some struggles remain 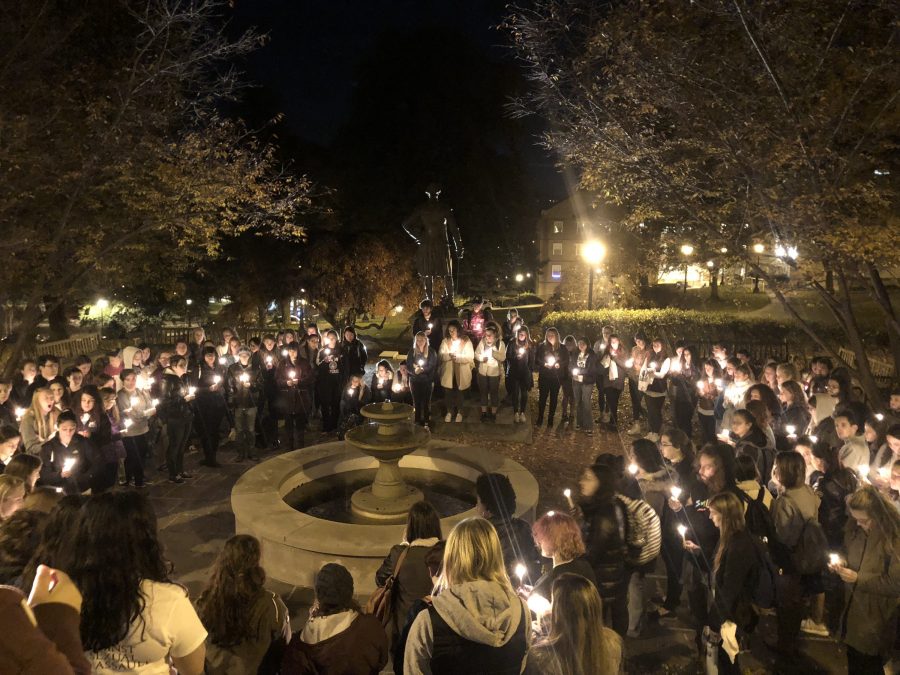 Last year's Take Back the Night vigil was well attended by students from across campus. (Photo courtesy of Nahin Ferdousi '19)

In the last two years, survivors of sexual assault and allies have made their voices heard, in society and on campus. A subject once frozen in shame is beginning to thaw.

Survivors of sexual assault at Lafayette say that during this time of change, they have seen an improvement in the campus climate—people are looking out for each other more, both in informal, everyday interactions and in the work of Pards Against Sexual Assault (PASA). Even with that, the crime is still heavily underreported overall, and survivors often remain silent.

The Justice Department reports that most sexual assaults on college campuses go unreported. If Lafayette holds true to national statistics of campus assault, compiled by the Rape, Abuse and Incest National Network (RAINN), about 315 women currently enrolled have experienced sexual assault or rape, and about 66 men have.

Nine cases of sexual misconduct have been reported in the crime log this year: four rapes, three sexual assaults and two indecent assaults. Since 2015, there have been 26 rapes reported, according to the Annual Fire and Safety Report. No outcomes to these cases have been made public.

Three survivors spoke to The Lafayette about their experiences. One allowed her name to be used. All three reported their alleged assaults to the college, in some way, but none pursued criminal charges of sexual assault. All attested to the positive strides made by the student group PASA during the last two years, both in annual events like Take Back the Night and in the work they do with other student groups on campus.

Her sophomore year, “there was a taboo about talking about sexual assault,” co-founder of PASA Nahin Ferdousi ‘19 said. Now, people are ready to discuss it and “make a change about it,” she added. Ferdousi was raped at a party her sophomore year by an upperclassman whom she did not know.

Ferdousi reported the alleged incident to the college via an online reporting form, before One Pard existed, more than a year after it occurred, but did not pursue internal charges against her alleged assailant. She reported in order to get to the resources she needed, she added.

Another student survivor of sexual assault, who wished to remain anonymous, agreed with Ferdousi that the culture has shifted.

“I did not plan on reporting [my assault], but then when there was this cultural shift on campus, where all the sudden so many people were reporting, it made it a less daunting idea to approach,” said the survivor, whose report of alleged assault, filed within the last two years, went through the Title IX office.

She added that at Lafayette now, a culture of protection among women has developed.

“I think there’s just this mutual understanding among a lot of girls on campus that we just want to protect one another,” she said, adding that women students will at times alert each other to those on campus who have a murky past with regard to sexual misconduct.

Even with the progress that has been made, some pitfalls of being a survivor on a small campus remain.

“For the most part [the campus is] very supportive, but also a lot of the time, I’m just very on edge,” said another student survivor, who wished to remain anonymous. She said she experienced repeated instances of unwanted touching for one semester, from someone she knew.

“I’m hyper-aware of my surroundings. I always get a little anxious when someone’s walking behind me, even if I know logically they’re not going to do anything,” since the alleged attack is “always in the back of my mind,” she said.

Ferdousi said that one thing the college’s administration could improve upon is becoming “more understanding of students…[and] how these types of events impact students’ everyday lives.”

“It’s not just that one incident, or that one day [that the assault occurs] that impacts the survivor,” Ferdousi said. “It’s every day since. It’s something that sticks with them for a long time.”

She added that with the experience of sexual assault also sometimes comes mental health struggles, such as post-traumatic stress disorder (PTSD), depression and anxiety. This can compound the stress of attending a challenging academic school like Lafayette.

“It’s really easy for a survivor to end up feeling lost in a wave of all the trauma,” she said.

To help manage their struggles, these survivors utilized different resources: one relied on her personal therapist, another spoke highly of the Lafayette counseling center, having seen the same counselor for two years, and another said the counseling center’s help fell short for her, as they recommended self-care practices instead of validating her experience.

Gender & Sexuality Program Director Grayson Thompson, whose role includes raising awareness about gender-based violence and resources for survivors, wrote in an email that the college does the best it can to address survivors’ needs with current resources, but could do better with more.

“With more resources, of course, we can better improve and address needs across campus communities,” he said.
A case gone cold and the channeling of pain ‘into something stronger’
Two women said that they have found support in Educational Equity and Title IX coordinator Jessica Brown, with an anonymous survivor describing her as a “tiger who is after it, which is very comforting. [She’s] very pragmatic.”

“[Jessica] Brown has also been a really great person and [she and Assistant Dean of Students Jennifer] Dize have been great at giving me the resources I’ve needed,” Ferdousi said.

One anonymous woman described a less than satisfying experience with the college’s student conduct response, and another felt as if there could be more clarity to the process.

One of these survivors reported another alleged non-sexual assault, committed by the same attacker as had sexually assaulted her, to public safety—she did not disclose sexual assault at that time, partly because she was embarrassed for having experienced it.

Another reason she did not report originally was because she did not want to be outed as bisexual—her alleged attacker is also female, and had used her sexuality to try to argue that the survivor should enjoy the incidents. She was afraid that could be brought up during an investigation.

Studies have shown that non-heterosexual women may be more likely to report experiencing sexual violence.

“A 2011 study analyzed data from more than 75 research reports and found that lesbian and bisexual women may be up to 3 times as likely as heterosexual women to report having been sexually assaulted during their lifetime,” the Pennsylvania Coalition Against Rape reports on their website.

According to the Human Rights Campaign, the Center for Disease Control reports that “[w]ithin the LGBTQ community, transgender people and bisexual women face the most alarming rates of sexual violence.”

No charges have resulted from the public safety investigation into the alleged non-sexual assault, the survivor said.

Nearly a year later, during a meeting about the alleged attacker, the survivor notified Assistant Dean of Students and Deputy Title IX Coordinator Jennifer Dize about the unwanted touching she experienced from that alleged attacker. Her friends were part of the reason she decided to do so, having been there to support her and urge her to take action.

However, no follow-up has come after that meeting, she said, from either Dize or the Title IX and Educational Equity Coordinator Jessica Brown. She was told that the information regarding unwanted touching was in the police report, although she did not recall having told public safety that. She has not checked the report to see if it is indeed there.

Dize declined to respond to questions about how she handles her role when sexual misconduct and other student conduct cases overlap. She has said that she cannot comment on any individual case.

At this point in time, the survivor said, she wants to put the whole process of reporting behind her and move on, and won’t be pursuing any follow-up herself.

“I don’t even know what’s happening anymore. I guess either it’s closed or gone completely cold,” she said in regard to the investigation.

One of the anonymous women said that it’s understandable to question why you would subject yourself to the formal complaint procedure, a “process in which [you] have to constantly re-live the trauma that took place.”

In a February panel on sexual assault, Brown commented on the potential of the investigatory process to re-traumatize.

“During these investigations there’s no way to 100% avoid asking some really difficult questions, but [investigators] are trained and try as hard as they can to avoid re-traumatizing people to the extent possible,” Brown said to the audience at the panel.

One anonymous woman said she was comforted by the protections that the Title IX office offered to put in place for her during an investigation.

“They offered me a no contact order, and it would be both ways [between her and the respondent],” she said. “It was made very clear to me that you could put in protections that would reduce the likelihood of [the respondent] contacting me…in any way.”

That survivor said that while the protections offered by the college helped her feel comforted, the campus climate, which helped her feel confident enough to report, was shifted mostly by student-run initiatives.

She said that events like It’s On Us Gets Personal, which happened April of 2017, “normalize speaking out about sexual assault and the emotional recovery process that one goes through afterwards.”

One of the anonymous women said that PASA’s Take Back the Night event, held annually the last two years, has impacted her greatly, and that the formation of PASA itself is a “huge step in the right direction.”

For Ferdousi, helping found the student group “has helped transform my pain into something stronger, into actual change,” she said.

“PASA was started in order to create a space for students,” she added. “We are a student group and here for students to provide support for survivors and making sure we educate the community on how to provide support as well. But we also consider ourselves a bridge, trying to bridge the gap between the resources available from administrators to the students.”

She added that PASA has done workshops with every athletic team, the ROTC program, the Marquis Players and much of Greek life, tailoring each group conversation to that specific group’s needs.

With those workshops, events like Take Back the Night, initiatives during Sexual Assault Awareness Month and more, “we’re creating spaces for survivors,” Ferdousi said.

RAINN reports that “[a]mong undergraduate students, 23.1% of females and 5.4% of males experience rape or sexual assault through physical force, violence, or incapacitation.”

College Chaplain Alex Hendrickson and the Counseling Center are the two options for confidentially reporting a sexual assault on campus—these resources don’t have to disclose information divulged to them to the Title IX and Educational Equity Coordinator. Sexual misconduct support advisors, who are trained faculty and staff members, are private resources who do not have to report “identifying information.”

“All other college employees are either required or encouraged to share information with the Educational Equity Coordinator,” according to the Lafayette resource guide.