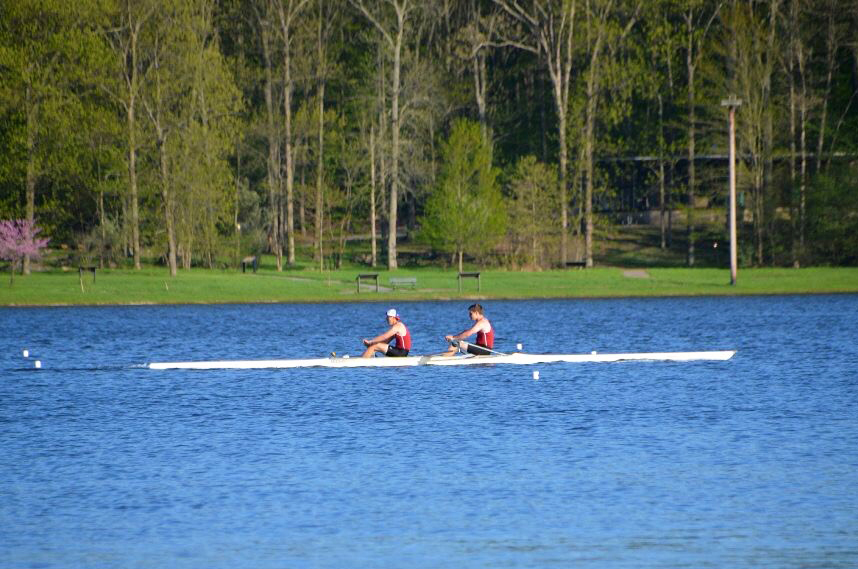 Today, the club crew team begins the race they’ve been anticipating for nine months: the Dad Vail Regatta, the largest collegiate regatta in the United States.

“In August, the team got together and [head] coach [Rick] Kelliher said, ‘We got some small goals,'” said freshman Ethan Ames.

Those small goals included “the Head of the Charles [Regatta] and River Cup [Regatta] against Lehigh, but starting today we are training for the big goal: the Dad Vail Regatta,’” Ames added. “This is the race that the coaches use to motivate us.”

“When it’s a Saturday practice and we’re two-and-a-half-hours in, coach will yell, ‘This is for Dad Vails! This is for the last 500 m,’” Ames added. “The whole regatta has been the primary goal. For us this is, and always has been, the endgame.”

Since Kelliher’s opening talk at the beginning of the season, Ames said the team had been focused on returning to Dad Vails and turning in a strong performance.

In last years’ “Battle on the Schuylkill,” the women’s novice-4 boat and the men’s varsity-4 boat took home gold medals after beating out other teams from schools like Clemson University, Bowdoin College, and Drexel University.

This year, however, both boats are filled with an entirely new group of rowers.

For the women’s novice boat, every single rower and their coxswain are new. In order to be considered a “novice,” a rower must have less than one year of collegiate rowing experience, and therefore the novice women’s-4 boat is now made up of four freshman rowers.

“There are a lot of expectations for our boat as we are coming off of a really good season,” said Good. “It’s going to be the closest race we’ve done this semester but it would be nice to come away with a medal. We’re going to go in to be competitive.”

For the varsity men’s-4 boat, their lone returning rower is senior Spencer Reynolds. Sophomore Euan Walker, freshmen Oliver Finlay and Ames join the boat this year with senior Katie Eskwitt as their coxswain.

The men’s varsity-4 boat rides a three-regatta win streak into the Dad Vail regatta, and the women’s novice-4 has won two straight.

Even after the team’s success last year, Ames said members of the team still maintain an “underdog” mentality.

“It’s nice to not only fight for yourself but to fight for your boat,” Ames added. “It’s a matter of fighting for the two hour practices. It’s a moment of realizing that the sport isn’t just about you, it’s about everybody, it’s about something bigger.”

Members of the team described the bond between the players as “familial,” after hours and hours of morning practices and weekend travel.

“Over spring break especially we came together, and I realized that this isn’t just a team, it’s a family,” said Ames. “We would spend the entire day together, and then we would go out for two-hour practices, and after all of that pain, we just got closer.”

Furthermore, Good said the team has been encouraging to its new members in order to help them through the pressures and expectations that come with competing at a high level.

“Last year’s novice women’s four is really supportive of us, they make sure to tell us that we’re our own boat,” said Good. “That we have our own goals, and that we can continue our tradition of excellence.”

The Dad Vail Regatta begins today and continues tomorrow on the Schuylkill River in Philadelphia.