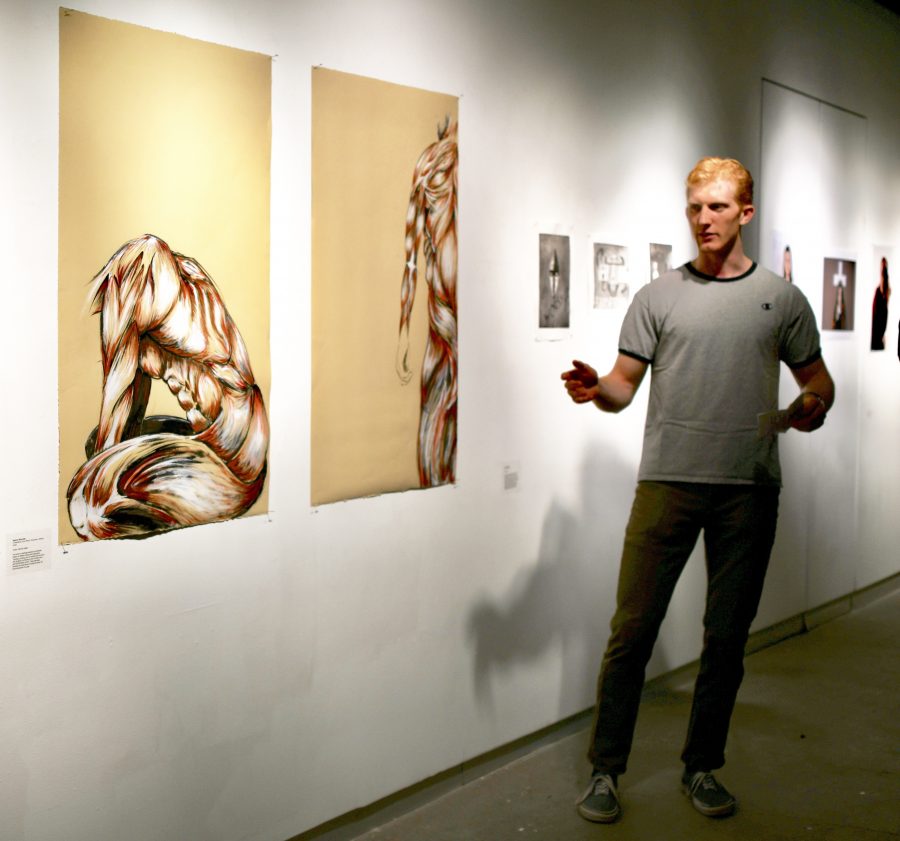 Time management has been key for Spencer Reynolds ’19, an art and mechanical engineering double major who is also on the college’s club crew team.

This semester, Reynolds is doing independent studies in both the engineering and art departments. He completed his senior capstone project in art at the end of the fall semester.

For his capstone, Reynolds did a series of paintings on large pieces of paper showing the anatomy of a human body in different forms. While he mostly does drawings and paintings, Reynolds has recently ventured into sculpture for his independent study with the art department, he said. For his art independent study, he is working on a sculpture of Prometheus, a hero in Greek mythology.

Reynolds said his art is informed by his “fixation” on the human body and form. He said this partially stems from his experiences as an athlete.

“Having a fixation on the body and trying to make it perform better lead me to have a lot of my work be centered around the figure,” he said.

Reynolds said reading graphic novels as a kid also influenced his interest in the body.

“I was always pretty into [graphic novels]. You see a lot of superheroes and very dramatic, gestural images of the human figure and they were just exciting to me and I wanted to replicate that,” Reynolds said.

Although his independent studies are in two different departments, Reynolds described how they connect. Reynolds is working on a painting of Prometheus for his engineering independent study.

“Prometheus gave humans fire and technology,” Reynolds said. “There’s a great quote where Prometheus is describing the way it was for humans prior to him giving them fire, and basically it was just misery all the time to be a human, you were just hopeless and lost.”

For his independent study in engineering, Reynolds said he is focusing more on how engineering innovations and technology “often have unseen ethical impacts.” He said that in his painting, Prometheus is putting his hand on the shoulder of a human being and is about to given him fire but he is still thinking about it “because he knows it is a very powerful and destructive tool.”

Reynolds said his interest in this topic was sparked after he watched a video about Cancer Alley, an area outside of New Orleans, La., that has high rates of cancer and is occupied by many oil refineries.

“[The people there] can’t do anything to keep the refineries from setting up shop there,” Reynolds said.

He said that when he began his art independent study, he was interested in learning how to work with materials like fiberglass and epoxy resins but he knew these materials had “ethical and environmental ramifications.”

“I was interested in using that aspect of materials to inform the work, and then when I read this story about Prometheus giving fire to humans, it just kind of clicked and it seemed like a great allegory for that problem,” he said.

Reynolds, who has had to take summer and winter interim courses in order to complete his credits for both majors, said the double major was challenging at times.

“When you work on these projects it’s not like it’s something you can just chip away at for 20 minutes and then just put it back in your backpack and work on something else. You have to commit several hours,” he said.

After graduation, Reynolds will be working for General Electric in Milwaukee, Wis., and will be in a rotational engineering program. He said although his job will not involve art directly, he hopes to “be involved” in the art community somehow.

“I’m sure art in some way, shape or form is going to be involved in my life. I don’t know how yet,” he said.