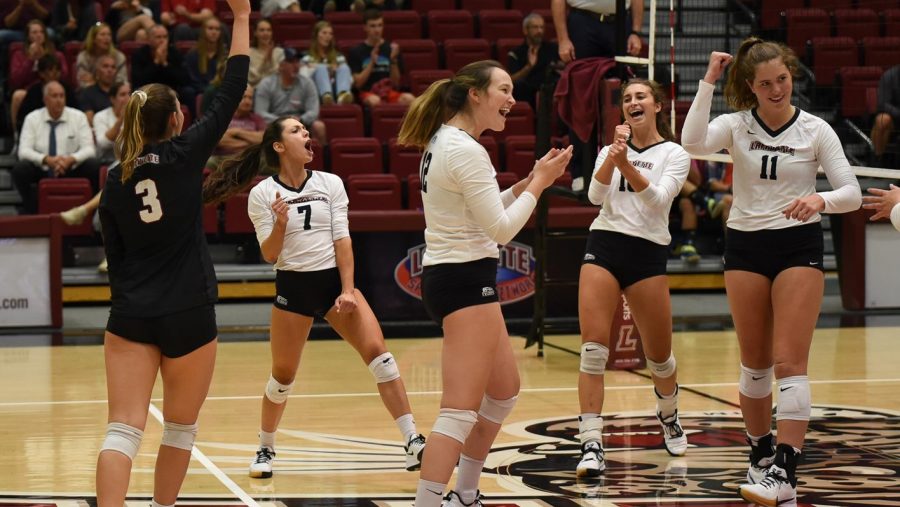 The volleyball team extended their winning streak to five with victories over Merrimack College, Delaware State University (DSU) and Siena College during the Lafayette Invitational last weekend. The Leopards have now reached six wins, the first time the program has won more than five games since 2015.

“I feel like we’re riding kind of a high, but not too high of a high,” head coach Ryan Adams said. “We’re still focusing on getting better every single day, and it’s just been fun to be around. It’s a cool atmosphere.”

In the first game of the weekend tournament, Lafayette won in straight sets, 3-0, against Merrimack. Sophomore outside hitter Grace Tulevech tallied 11 kills and added a block, as the team overall had nearly twice as many kills as the Warriors (47-26).

“All my teammates have been awesome in supporting me,” Tulevech said. “My coaches are really good at fine-tuning the things that I’ve been doing wrong, so they’ve been really helpful that way too.”

Senior outside hitter Katrina Ruggiero matched Tulevech with 11 kills and contributed an ace as well. The Leopards recorded 45 assists to Merrimack’s 24, with 18 of those assists courtesy of junior setter Jenna Bailey.

“Overall, all six of the players that we have on the court at any given time are stepping up and becoming leaders,” Adams said. “It’s such a team-based sport, so yes there are leaders sometimes and some people take a backseat. But overall we’re all kind of working together and just being able to build on that.”

In the second game of the tournament, the Leopards emerged victorious against Delaware State for the second time this season. Lafayette narrowly clinched the second set 27-25, but won the first and third sets comfortably to sweep the Hornets.

“We’ve been really focused at playing our game and finding our average and then at least being average all the time and always working to get better,” Tulevech said. “So that’s one of the things that we did pretty well this weekend, we played pretty consistently overall which was a step up for us and we haven’t really done that in the past.”

In the third and final game of the weekend set, Lafayette beat Siena in straight sets 3-0. The first set was tied 16 times, including at 26-26, before the Leopards escaped with a 28-26 victory. Freshman outside hitter Ellie Carrera-Justiz broke the late tie with a kill before two attack errors by Siena clinched the victory for the Leopards.

After a 25-21 win in the second set, the two teams were once again tied at 26 in the third set before sophomores middle blocker Madi Wahrmund and outside hitter Leanna Deegan recorded back-to-back kills for the sweep.

“It was just fun to see us pull out close games in the long run,” Adams said. “I think it helps us for future matches where it’s close, it’s good to just be in those situations and being willing and able to take good grips when you can and be smart and take care of the ball.”

Freshman outside hitter Grace Steurer had 11 digs and the only ace for the Leopards. According to Tulevech, Steurer has been the defensive specialist for the team so far this season.

“[Steurer’s] been really vocal on the court, she has really high energy,” Tulevech said. “She always has some positive things to say during timeouts or between sets so it’s really uplifting to see, especially her as a freshman coming in and taking that leadership position.”

“I mean it’s always great to win but we’re not even focused on the end result right now,” Adams said. “We’re just focused on grinding it out and getting better every single day. Winning is great but that’s just a byproduct of the hard work we’re putting in.”

Next up for Lafayette is a four-game weekend set in Hartford, Conn., starting today at 2 p.m. against Hartford.