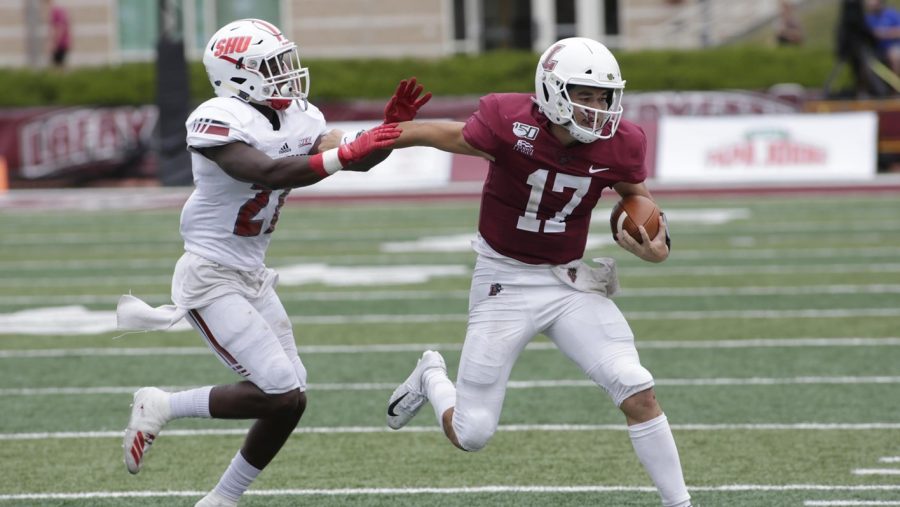 Freshman quarterback Keegan Shoemaker has stepped into the role of starting quarterback in the team's last three games. (Photo courtesy of Athletic Communications)

The Lafayette football team lost this past weekend in a road game against Albany, 36-7. The team’s record is now 0-4 with two more games left before Patriot League play starts in mid-October.

A bright spot in the game was defensive lineman Damon Washington, who earned Patriot League Rookie of the Week honors for his performance. He and fellow freshman linebacker Marco Olivas combined for 26 tackles.

Freshman quarterback Keegan Shoemaker paced the offense with 230 passing yards, and freshman wide receiver Joe Gillette accounted for 105 of them. Gillette secured the Patriot League Offensive Player of the Week award for the second straight week with over 80 receiving yards.

“A lot of freshmen are stepping up to fill the voids left by the injuries,” said sophomore tight end Steven Stilianos. “[Gillette] stepped up big for us when [junior wide receiver Quinn Revere] went down. We’re making do, but hopefully we’ll get a lot of our injured guys back for the start of league play.”

Albany seized momentum early on, taking the opening kickoff for an early 98-yard touchdown. Albany continued their scoring throughout the game, recording at least a touchdown in every quarter as the Lafayette defense was unable to get stops.

“Were missing at least eight starters, with the majority of our defensive linemen being out right now,” Stilianos said. “We’ve even had to move some linebackers down to play D-line to fill in the gaps.”

Injured players have already begun to return. In particular, Revere has come back from an injury and has started to develop a relationship with Shoemaker.

“Establishing a connection with the quarterback is big,” Revere said. “[Shoemaker]’s come in and has earned it. We know that he can do it. I started to establish a relationship with him during the summer, being a local Texas boy like myself we were able to throw together. It’s new, it’s been efficient, but it’s been good.”

“[Shoemaker] is definitely becoming more comfortable on the field,” Stilianos added. “That’s translating to the locker room where he’s becoming… a leader. Obviously as a freshman you’re going to make mistakes, but he’s been doing a hell of a job.”

Tomorrow at 3:30 p.m., Lafayette takes on the University of Pennsylvania in their annual homecoming game at Fisher Stadium.

“As much as it’s been a rough start to the season, league play is completely open,” Stilianos said. “Everyone in the [Patriot League] is kind of struggling right now, but once we get our injuries back we’re going to have a good season.”