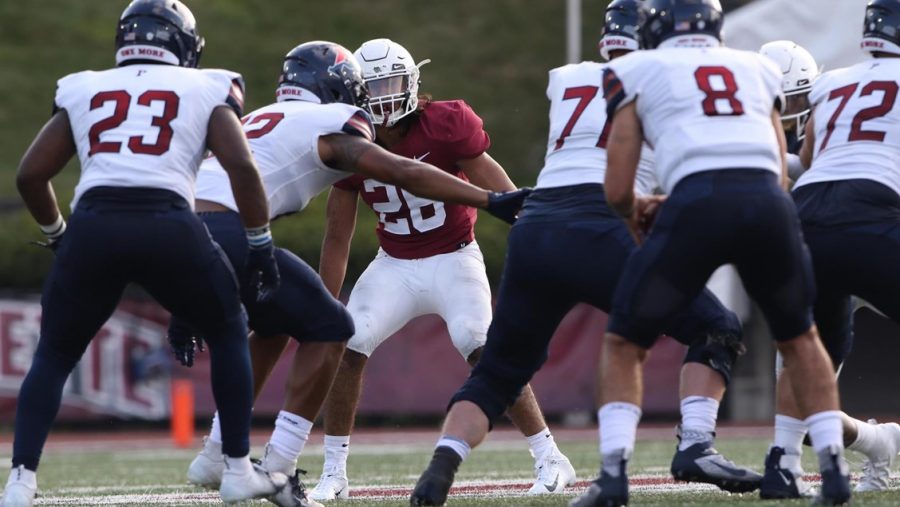 Football holds a 0-5 record for the season so far, all against non-conference teams. (Photo courtesy of Athletic Communications)

Last Saturday, the Lafayette football team lost to the University of Pennsylvania 28-24 in the annual homecoming game at Fisher Stadium. The Leopards now hold a 0-5 record and will face Princeton next Friday in their final non-conference game of the season.

Freshman quarterback Keegan Shoemaker was frequently under pressure against the Quakers, getting sacked seven times. Despite the defense, Shoemaker threw for 287 yards and three touchdowns, completing 23 of 33 passes without an interception. Through five games this season, Shoemaker has amassed over 1,300 total yards and has eight passing touchdowns.

“Well, there’s not really one thing,” head coach John Garrett said of the quarterback pressure. “Sometimes when [Shoemaker] gets pressured, it’s good coverage, and you have to hold the ball. Sometimes, a guy gets beat. Sometimes it’s pressure, and they bring more than you have blocking, and you got to get the ball.”

“One of the keys of game, every single game we go into, is don’t turn the ball over,” Shoemaker added. “That was a big goal of mine going into the game. Don’t have any turnovers, and let’s be hard to beat.”

“[Scott has] always been a valuable member of our offense when he’s healthy,” Garrett said. “Now remember some of the catches that he made last year. He’s been really working hard to get back [from injury]. This was his time to be active and ready and he contributed, so we’re really pleased to have him.”

On the defensive side, freshman linebacker Marco Olivas made a Patriot League season-high 17 tackles, and was named the Patriot League Rookie of the Week. Olivas is the third Leopard to win a weekly award this season, joining Shoemaker and freshman defensive lineman Damon Washington.

For the second time this season, the Leopards scored first and retained a lead throughout the first quarter. Junior kicker Jeffrey Kordenbrock nailed a 43-yard field goal to give Lafayette the initial 3-0 lead.

Penn looked to tie the game early in the second quarter, but a block by sophomore defensive lineman Malik Hamm on a field goal attempt helped Lafayette keep the lead.

Both teams were held scoreless in the third quarter before the Quakers scored early in the fourth to open a 21-10 lead. Shoemaker hit freshman wide receiver Joe Gillette with an 11-yard touchdown pass with just over two minutes remaining, and the Leopards capitalized on the two-point conversion to narrow the deficit to 21-18. Penn sealed the game with a late rushing touchdown before Scott hauled in his second touchdown of the day as time expired.

“We certainly had them on the ropes,” head coach John Garrett said. “We were moving the ball they really couldn’t stop us, except we got ourselves bogged down on the early red zone drives.”

The Leopards will travel to New Jersey to take on Princeton next Friday at 7 p.m.