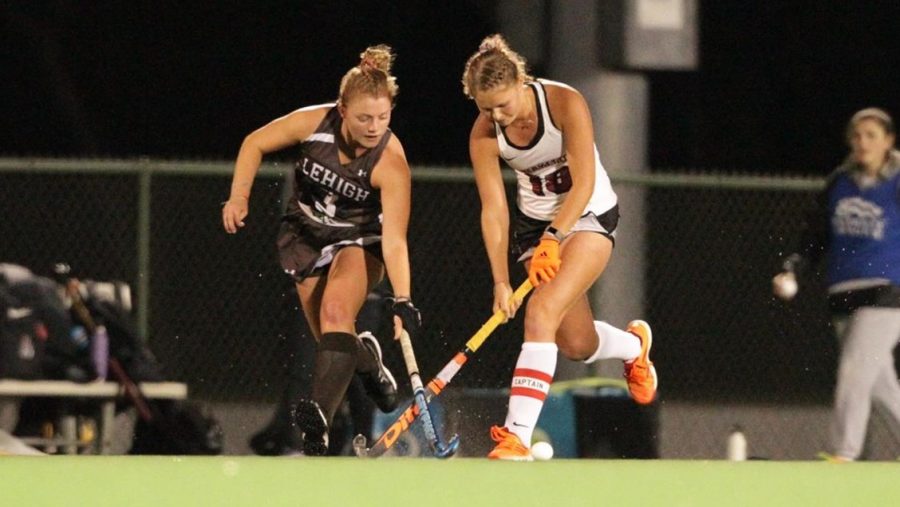 For the first time since 2012, the Lafayette field hockey team could win the Patriot League regular season title, and a victory tomorrow over American would clinch them a home tournament.

The team’s success this season is not unprecedented, as their 2-4 conference record of 2017 improved to 4-2 the following year, and currently sits at a perfect 5-0. Another reason behind their perfect conference record this year is the performance of senior defender Lisa van der Geest, who has helped the Leopards on both the offensive and defensive end.

Van der Geest’s 21 points are good for third in the conference, with her seven goals ranking her sixth and her seven assists just one shy of the league leader. On the van der Geest-led defense, the Leopards are limiting shots on goal so much that Lafayette is allowing the second fewest goals per game in the Patriot League and ranks sixth in saves.

After scoring two of her team’s three total goals in their last two games, both wins, van der Geest earned her fifth consecutive Patriot League Defensive Player of the Week honor, setting a conference record for the most consecutive weeks with that award.

Both of her goals last week gave the Leopards a lead, with an early score against Bucknell on Saturday and a game-winner in the final two minutes to break the tie against UPenn on Sunday. On Wednesday, van der Geest was named the Division I National Defensive Player of the Week by the National Field Hockey Coaches Association (NFHCA).

“Both my goals this weekend came off penalty corners, which is a combination of many pieces tied together by several teammates,” van der Geest said. “For both goals, there were three other people who had to do their job so I could do mine.”

Van der Geest produces most of her offensive output on attack penalty corners, which she said she’s improved on over her Lafayette career, having always been a part of the team’s unit for those plays. Reading the defense to “know where the space is and opportunities are” is a major part of it, she added.

“Penalty corners are very much about accuracy and in a lot of ways, repetition,” she said. “In order to score most of the goals that I score, every single aspect of the corner has to be close to perfect in order for it to work. There are many components to a penalty corner, and a good or bad touch in a specific instance can make the difference in terms of scoring or not, and the difference in the game.”

Although the awards continue to pile up, van der Geest said the team is supportive of her but focused on winning. Last season when she was named to the third team All-American, she did receive a formal congratulations from her strength and conditioning coach Steve Plunkett.

“My parents and friends at home don’t always understand what the awards are for because to me and them the awards are a pretty American thing,” van der Geest said. “But it’s definitely nice to get some texts every now and then from home.”

Van der Geest grew up in the Netherlands, where she says field hockey is prominent. The defending world champion women’s national team has won the championship a record eight times.

“Growing up watching and playing field hockey that much definitely helped me learn about the game a whole lot more than if I simply played it, and [was not] immersed in the culture of field hockey as much,” she said.

Field hockey in the United States is more physical than she was used to, van der Geest said. Although she felt her “tactical and technical” skills were strong coming into Lafayette, she had to ramp up her physicality, which she says Plunkett helped her with.

“Most of my physical improvements simply came from running,” van der Geest said. “At home, there’s a certain basic fitness level that players should have, but the focus simply lies more with your tactical and technical ability. We had no running tests, we didn’t lift at home, but everything was based on your ability to play the game.”

The Leopards have gotten more international players since van der Geest arrived, which she says she enjoys because she can learn about her teammates and where they come from.

“We had four girls from Canada and one girl from Scotland on the team when I came,” she said. “Now, we have three German girls, two Dutch girls, two Canadians, and an Irish girl, which has positively impacted our team in terms of mixing different styles of hockey.”

The team’s regular season finishes tomorrow with a game at American, with the winner earning home field advantage for the Patriot League tournament. Both teams enter the game at 5-0 in the conference.

“It would be amazing if we could host the Patriot League tournament, both for the team and for the school,” van der Geest said. “But right now, I don’t think we’re too result-focused, but more focused on our learning process and how we’re going to play our best hockey the following week, without overlooking tomorrow’s game. We’re also very much looking forward to what’s to come.”

“I think the game will be a good indicator of where exactly we’re at as a team and how we’re going to approach the semifinals next Friday,” she added.

The Leopards head to Washington, D.C. tomorrow for their 11 a.m. matchup in the regular season finale.