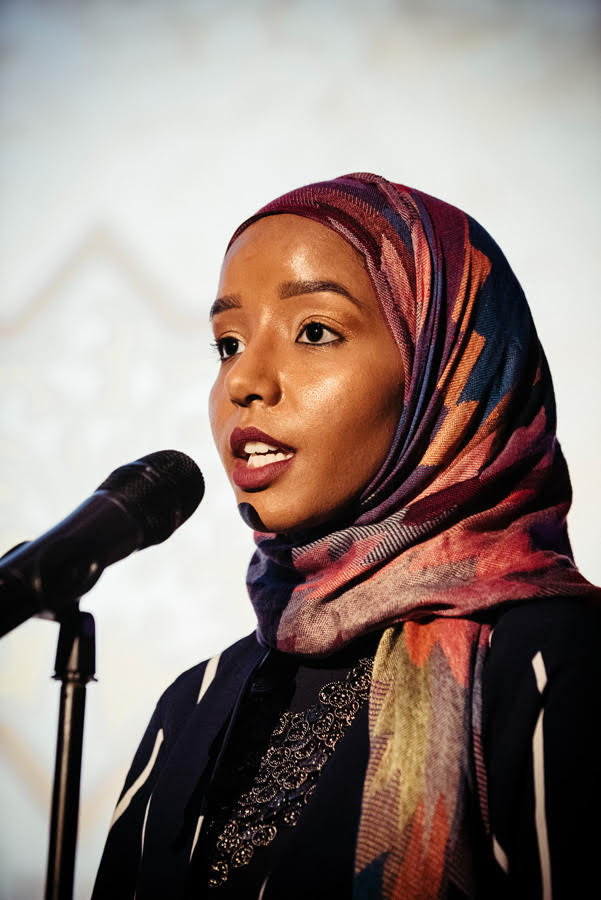 “The reality is, I’m not allowed to feel fear on a plane. I am what will cause the fear. I don’t have the privilege to have anxiety,” Bayadir Mohamed-Osman said in her spoken word poem.

Mohamed-Osman’s spoken word piece, which was published on the NowThis Youtube channel and gained over 10,000 views, emphasizes the idea that being anxious about flying is a privilege that many Muslims do not have, especially Muslim women who wear a hijab, due to the anxiety of not making it past TSA or being interrogated by officials.

She describes the micro-aggressive stares of spectators as getting “shot with bullets,” and her intersectional identity as a black, Muslim Sudanese woman as being “drafted for a war that I didn’t want to be a part of.” She ends her piece by posing the question of whether people truly want peace, or if “they want me to take off my hijab and wave it as a white flag?”

An American University graduate, public health professional, poet and activist, Mohamed-Osman is currently involved with Oxfam International’s campaign #IMatter, which is a solidarity movement that demands women are in positions of leadership throughout the world.

“Women undergo the struggle during crisis moments, and they’re the ones on the forefront during the crisis and during the wars,” she said. “But what happens is when things are post-crisis, women are no longer given a voice. So I’m a part of this campaign, I’m supporting them.”

Mohamed-Osman is additionally continuing her work in the Sudanese Revolution and hopes to educate people on how to get involved with Sudan through her social media accounts and website. She is also working on a poetry project that she hopes will be released in spring of next year.

The Muslim Student Association (MSA) is hosting Mohamed-Osman tomorrow, November 2, in the Marlo Room from 4 p.m. to 6 p.m, with the theme “reclaiming my narrative.” Following her spoken word performance, there will be an open mic and Q&A section, where students will be able to express themselves through various forms of art.

“I really hope that this event opens the door for a lot of people [to] use their creativity for something they care about, or letting us recognize that we’re more than just what we are on paper,” MSA president Umamah Masum ‘21 said. “We’re more than just labels.”

Mohamed-Osman’s work echoes the idea that having intersectional identities can feel burdensome, especially when one’s identity is questioned or expectations are placed by others based on discriminatory and prejudiced beliefs. The constant questioning of others and fear for one’s safety can especially hinder one’s mental health, which is also a cause that Mohamed-Osman said she works towards educating people on.

“We go through stuff and we go through a lot of traumatic things in our life, and it adds up,” Mohamed-Osman said. “These little tiny things, they chip at you. I know when I enter a store, I get a certain look sometimes. When I’m around police officers or my brother’s around a police officer, because he’s a black man, my heart drops. I still get anxious, my hands shake. Just from reading the news and reading statistics.”

In addition to having family members who have experienced hate crimes, Mohamed-Osman said that part of what the poem was trying to show it is the everyday things “that add up.”

“It’s the little things every day that add up. That’s what I carry everywhere I go, I never forget that I have a hijab on top of my head,” she said, adding that even in the rare moments where she does forget, the looks of other people remind her of her difference and that she is not in Sudan.

This experience is something that Masum relates to, especially as a minority and a Muslim woman who wears a hijab.

“When I started traveling on my own, I wasn’t scared about being in a metal car, essentially, in the middle of the sky. I was scared about TSA,” she said. “So I didn’t have the privilege of having anxiety about being 30,000 miles up in the air. For me, the anxiety was like, ‘am I going to be stuck in TSA for five hours? Am I going to be detained?’”

The media has built one dimensional narratives for black women and Muslim women based on stereotypes, thus, “the purpose of this event is for an opportunity to take back my story, to say it in my way, to reclaim my truth and to hear from my perspective,” Mohamed-Osman said.

Part of breaking out of the stereotypes and restrictions of identity, is acknowledging that a person’s story and narrative goes beyond the labels placed on them, Masum said.

“I feel like a lot of people who are coming from marginalized backgrounds face [having to reclaim their narrative],” Masum said. “I have to defend my identity but at the same time, I shouldn’t have to, I should be who I am. I should have my own personality outside of this.”

At Lafayette, Mohamed-Osman hopes to provide the community with the “tools” and the “space to express themselves” and “to remind them that their voices matter.”

“The stereotypes that are placed on us are not who we are,” she said. “[We are] who we want to be and what type of person do we want to be in the future. So I just want to inspire students to continue expressing themselves and…growing into themselves. Everyone else’s story in that room is also powerful. And I want to contribute in uplifting marginalized communities’ voices.”

Masum said that as long as the events makes an “impact on people,” it doesn’t matter if only five people show up.

“I don’t think we self evaluate anything,” she added. “This is a time for us to really evaluate ourselves and understand who we are. So I just hope people can get something out of it, whoever comes.”

Both Masum and Mohamed-Osman believe that poetry is a gateway to educating and bringing forth issues that are usually hidden away.

“I think poetry really can transcend cultures, and it can hit people in different ways even if people aren’t speaking the same language as me,” Mohamed-Osman said. “If I tell you a story, you still might understand it. You might not experience being a black Muslim woman, but if you hear it through my lens and you hear it through my way of storytelling, you’ll experience a glimpse of it.”

“And I think it really brings people together. And with spoken word too, it gives the opportunity for us to learn about each other because everyone has such unique stories. I don’t just teach people, but [spoken word poetry] teaches me a lot about other communities and other identities,” she added.