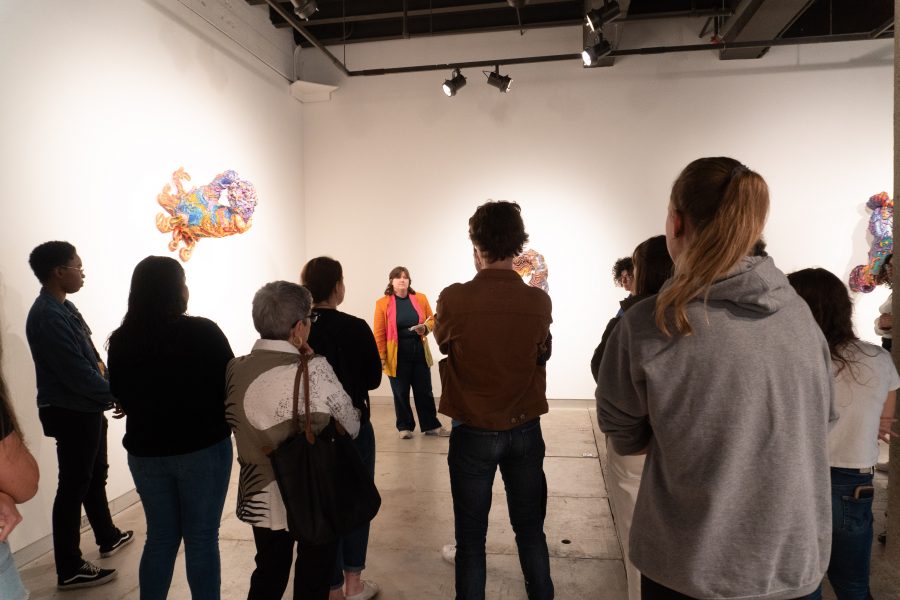 While visual artist Kim Altomare’s pieces may be currently on display at the Grossman Gallery, her ongoing creative visions continue.

This past Monday, Altomare spoke about her art exhibition currently open at the college until November 23. Her work includes abstract relief artwork influenced by Elizabeth Murray and Ree Morton. Relief art is described as any work that projects from a wall or other background surface on which it is carved, combining two-dimensional pictorial arts and three-dimensional sculptural arts, according to Visual Arts Cork.

Altomare is a visual artist from Yardley, Pennsylvania and a recipient of the Lafayette College Experimental Printmaking Institute Residency for the fall of 2019. She received her MFA from the Yale School of Art and BFA from the Tyler School of Art in 2013. From 2015-2017, she was a member of the Philadelphia art collective New Boone, where she organized film screenings and exhibitions, according to the online event description.

The presentation began with Altomare describing the dual relationship between planning and working freely with her pieces to the Lafayette community.

Altomore then explained to the audience how after constructing her pieces, she arranges her works deliberately, with the intentional placement of each object onto the wall. She added that orienting each piece at certain heights and angles on the walls achieves specific light refractions and highlights each sculpture from specific angles.

In an interview, Altomare said that her art “works closely with the unconscious” and that she uses her artwork to project feelings and “psychological readings.” This, she added, made each relief piece a construct that is unique from the others.

Each piece begins with “a few weeks of drawing” to plan out a piece, she said. She constructs her sculpture out of readily available, everyday materials, such as cardboard, paper mâché, aluminum wires, yarn, and sculptamold. Finally, each piece is painted over with resin and acrylic paint to varying degrees. In total, Altomare said each piece took around two months to construct.

While the pieces are currently being publicly displayed, according to Altomore, “nothing is finished.”

One audience member asked if Altomore plans to further engage the space that the viewer is in with the pieces of art. She replied saying that she believes that will be her next artistic step in enhancing her works.

Later this November, Altomare said she will be working on creating a print edition of her work with the college’s Experimental Print Institute.