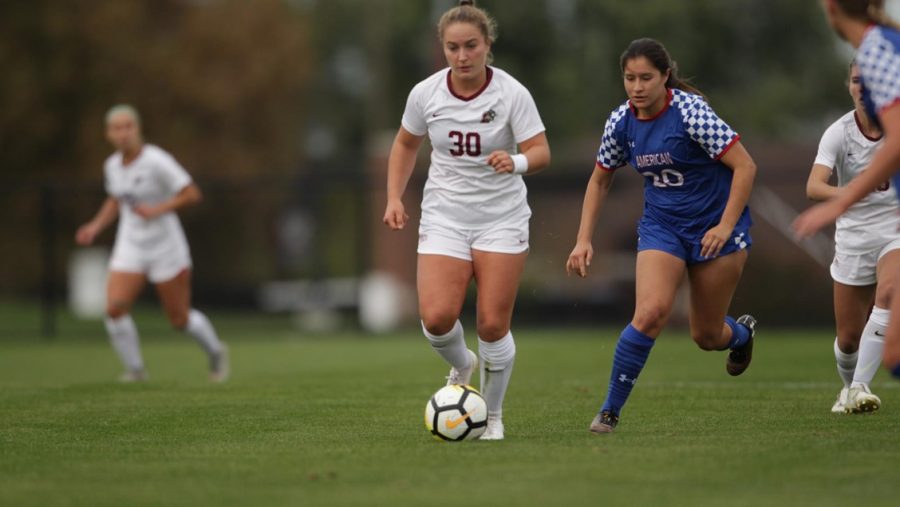 The Lafayette women’s soccer team earned a spot in the Patriot League Tournament with a win over Boston University (BU) last Saturday, but their bid was short-lived as they lost in the first round to Loyola Maryland on Tuesday.

The team completed a late comeback when sophomore midfielder Riley Dowd and junior midfielder Sophie Saldivar both scored goals in the final ten minutes against Boston University on Saturday.

“Maggie Pohl made a couple of big saves to keep it 0-0, which was very important for us going into halftime psychologically,” head coach Mick Statham said.

Freshman forward Sara Oswald, senior midfielder/forward Abbie Bresnahan, junior forward Krista Kissell, and Saldivar all had shots on goal in the second half. The Terriers, however, scored the game’s first goal in the 80th minute, despite Lafayette outshooting BU 11-4 in the final 45 minutes.

“I scored the first goal so I tied it off, but we hadn’t won the game yet and knew we had to win, so we had to keep pushing,” Dowd said.

It was Saldivar’s goal that ultimately won the game and made the team eligible for the playoffs, putting Lafayette over Bucknell and Colgate and into a tie for fourth place with Loyola.

“It was nice knowing we had that goal and were not going to overtime,” Saldivar said.

“It wouldn’t have happened if it wasn’t for Krista [Kissell],” she added.

“It [was] well deserved, the players have been great. I’m very happy for them,” Statham said, on making it to the postseason. “In January when we came back from winter break the returning players had a great spring, but the freshman have played hard and trained hard. I’m really pleased that we got to achieve our preseason goals.”

In the postseason matchup, the Leopards and the Loyola Greyhounds couldn’t put a goal on the board in the regulation 90 minutes.

“We controlled the game [for] the most point,” Saldivar said. “We had a lot of opportunities but we couldn’t capitalize on them. The effort was there, we ran hard and all worked as a team.”

“Everyone played so well, no one had a bad performance,” Dowd added. “It was one of the best games we’ve had.”

Toward the end of the second overtime, Loyola’s second shot on goal of the day went just above Neumann’s outstretched arms to give the Greyhounds the win.

“It was just heartbreaking,” Dowd said. “But this whole season gives us so much hope for next year because the things we accomplished are things that have never been done before in this program.”

Although the Leopards forced two overtimes to ultimately lose to fourth-seeded Loyola, Lafayette finishes the season with a 7-6-5 overall record, after going 5-12 last fall, with three players earning spots on All-Patriot League teams.