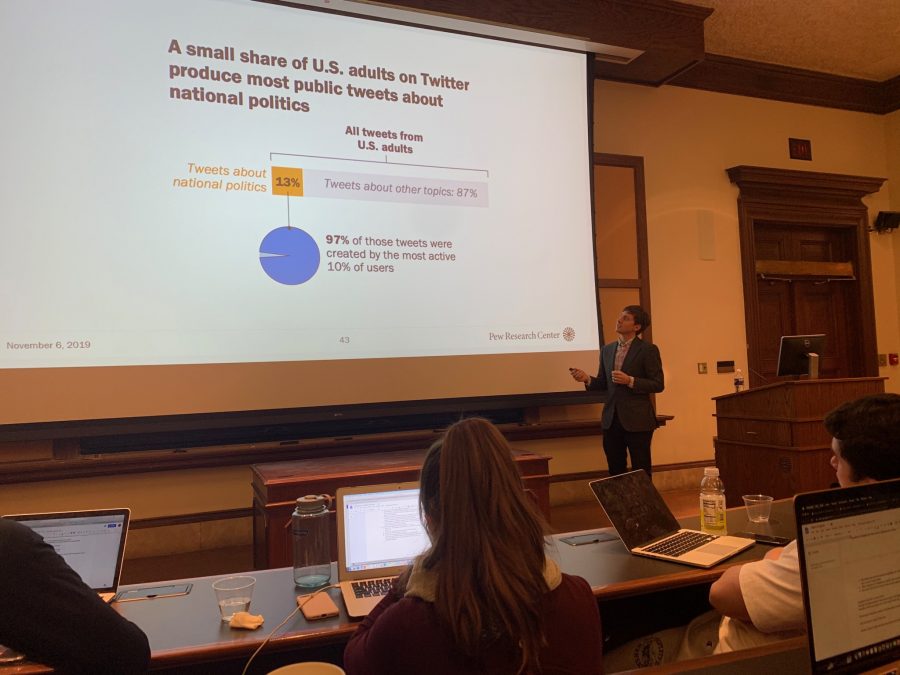 Adam Hughes explained that the majority of political tweets come from a small percentage of Twitter users. (Photo by Graham Armknecht ’22)

Adam Hughes, the associate director of Data Labs at Pew Research Center, spoke to a packed audience on the connection between politics and social media. In his talk “Politics in the Trump Era,” Hughes analyzed data collected by the center from social networking sites in an effort to explain how current politics interact in these new public spheres.

The data that Hughes presented came from Facebook and Twitter, and Hughes focused on how both politicians’ and American citizens’ reactions to politics has changed since Donald Trump’s election in 2016.

“[The Facebook study] is focused on members of the US Congress and how they use Facebook. It will involve looking at every member of Congress over the three-year period, and then seeing where they talk on Facebook and how their online audiences react,” Hughes said. “The second project focuses on Twitter. About 23% of Americans use Twitter, and this project looks at discussion among ordinary [users] on social media.”

The data for the Facebook study was gathered from January 2015 to September 2017 and a total of 700,000 posts were analyzed, Hughes explained. In order to analyze the data, 11,000 posts were categorized manually by how often these politicians criticize other congresspeople on the other side of the aisle.

“We’re going to use a machine learning model to basically pick up on the patterns between the words used in the post and [the posts] humans hand classified,” Hughes explained. “Then apply those patterns to all of the other posts in the news. So even though we’re going to only code 11,000, we can use this algorithm to classify all of them.”

The center found that the Democrats in 115th congress, which were elected under the Trump administration, had a much higher percentage of posts in opposition to the other party than Republican congresspeople. Hughes explained that this is a large difference from the fairly equal amount of oppositional posts from Congress before the Trump era.

“We found a really large inequality, where the top 10 percent of political tweeters generate 97 percent of the national politics tweets. That means politics is really not that big of the topic of discussion on Twitter among all US adults,” Hughes said. “Totally is among journalists, totally is among news outlets, but among ordinary users, it’s not that common.”

Henry Morgan ’22, said that he was surprised at the data collected by the center, especially on how few people tweet about politics on Twitter when he felt it was much more prominent.

“It’s important to keep in mind that we see so many strong opinions on Twitter, [but] that’s only a small percentage of each side that has such strong opinions, and everyone else in the study was way more moderate,” Morgan said. “It’s just the most common arguments we see are coming from the extremes of both sides, and that’s not what the majority of people on either side actually agree on.”