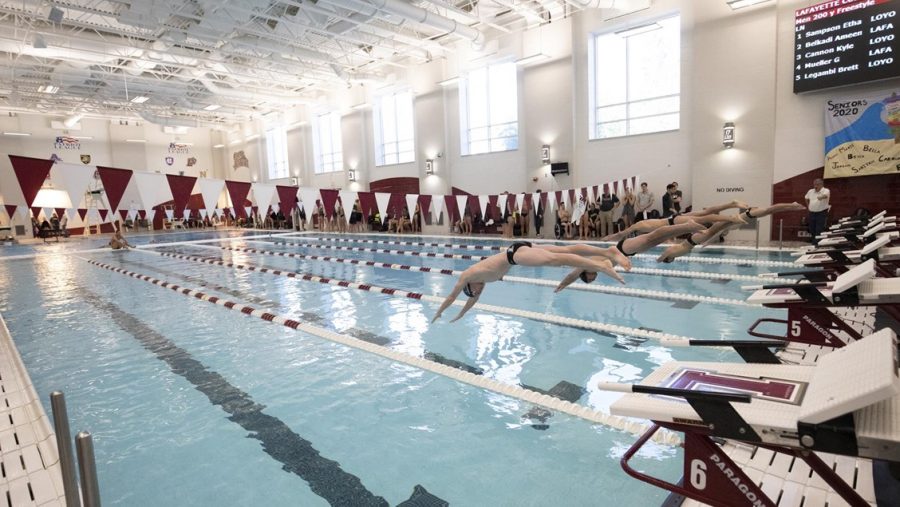 The Swim and Dive team travelled to Annapolis, Md., last weekend for the meet against conference opponents Navy, Bucknell and American. (Photo courtesy of Athletic Communications).

The Lafayette swim and dive teams were back in action last weekend, as the men beat American 165-97 in a Patriot League quad meet on Saturday after the women lost to Long Island University (LIU) 167-127 on Friday.

In men’s action at Navy, sophomore Michael Gorgan swam in four races on the afternoon and placed second in the 200-yard backstroke in a season-best 2:11.49 and fifth in the 100-yard breaststroke in 58.90 seconds.

“I like to visualize my races before hand, and then I try to keep myself as physically prepared as possible,” Gorgan wrote in an email. “Warming up before the race and cooling down after the race is vital.”

Gorgan teamed with freshmen Ethan Keyes and Aaron Tupper, and junior Tanner McFarland for the 200-yard medley relay, finishing seventh with a time of 1:37.01. Gorgan, Tupper, senior Bryce Currie, and sophomore Justin Lloyd came in second place in the 200-yard freestyle relay with a time of 1:27.34.

“I do think that [event] will be one of our strengths this year,” Gorgan wrote. “We have a very strong 200 freestyle relay this year and I’m pretty confident in our ability to break the school record at the Patriot League Championships.”

After a long week of practice leading up to the meet, Gorgan also added that ice baths were a “saving grace” for his legs.

Junior Maya Imperial placed 10th and 12th in the 200 and 100-yard butterfly, respectively, while freshman Sydney Perks finished in 11th in the 500-yard freestyle in 5:31.36, the second fastest freshman time in the event.

Sophomore Emily Wilson and freshman Amanda Reeter produced 11th and 12th place finishes in the 200-yard freestyle with times of 2:02.45 and 2:03.94 respectively.

“Overall, despite having a nighttime meet on Friday and then waking up at 6 a.m. to go to Navy the next morning, I think our girls really showed up and did the best they could,” junior Emma Piascik said.

“Sydney and Tara are both powerhouse swimmers, they’re always showing up,” Piascik said. “It’s really exciting to have that talent on the team and have those people to look up to, even though they are younger. We don’t have a hierarchy in age, so it is very much based on ability. You can be a freshman like Sydney and really succeed and have people look up to you. It’s a big morale boost to have that talent on the team and know that our program can produce that.”

Leininger, Wilson, and sophomores Samantha Talecki and Emily Richter scored four points with their second place finish in the 400-yard freestyle relay, timing in at 3:44.13.

Up next for Lafayette is a dual meet at rival Lehigh next Friday, November 22nd at 6 p.m.