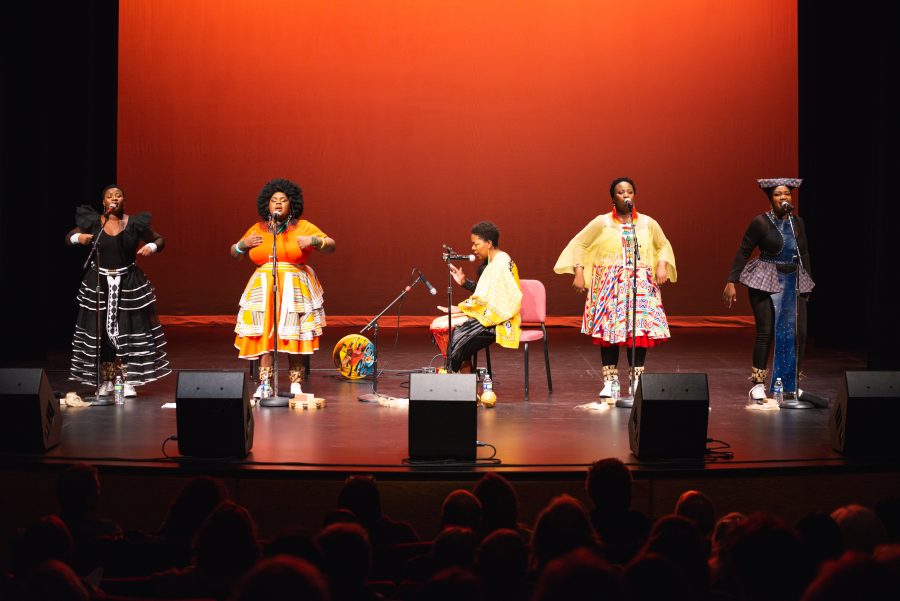 Nobuntu is a female a cappella quintet from Zimbabwe and, notably, the first all-female Imbubu a cappella group in the world.

The group performed at the college this past Tuesday, sharing their passion for music and their culture in a colorful production, with each of the five group members wearing traditional clothing from five different tribes in South Africa.

Using only a few traditional South African instruments, the group relied on their powerful and contrasting voices to deliver their signature blend of musical genres. Audience members were also given a humorous lesson on how to click, as the performers do in their music.

Songs performed include “Moya Moya,” a piece about a woman lamenting her ability to have children, “The Black President,” in honor of Nelson Mandela, and an original arrangement of “Amazing Grace.” In some of the songs, group members also performed a dance.

The group was nominated for Best Musician of the Year at the Zimbabwe International Women Awards in 2015. They have performed their range of traditional and contemporary African music across the globe. Nobuntu has also released three recordings since 2013.

Group members include Zanele Manhenga, Thandeka Moyo, Duduzile Sibanda, Heather Dube, and Joyline Sibanda. Their name, “Nobuntu” is a word referring to an African concept that “values humbleness, love, unity and family from a woman’s perspective” according to the group’s website.

Group member Duduzile Sibanda explained in an interview that most of Nobuntu’s performances are educational: they aim to share their culture and knowledge about where they come from and what their music is with their audiences.

As such, according to Sibanda, colleges are “quite appropriate” for Nobuntu’s audience since people generally come to the shows to learn as well as be entertained.

“Singing for us is our first love so whenever and wherever we share it, we always give it our all,” Sibanda said.

Sibanda added that she hopes the group spread “messages of love, peace, unity, [and] being humble” to their audience Tuesday night.