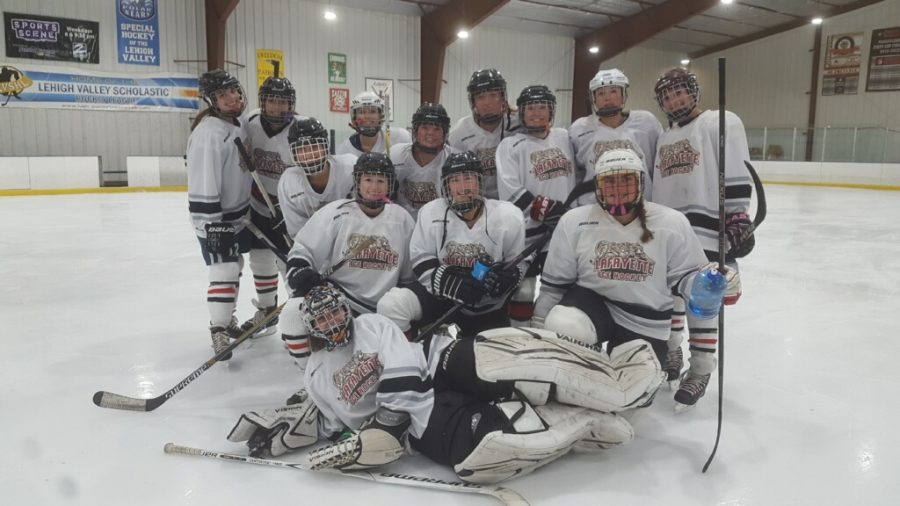 The Lafayette women’s club hockey team came away with two wins against Indiana University of Pennsylvania (IUP), the top team in their league, this past weekend with scores of 5-2 and 7-3.

Freshman forward Genevieve McClean had a pair of goals and an assist on Saturday. She followed up that performance with two more goals and three assists on Sunday, good for a team-high eight points on the weekend.

Members of the team said that this season is all about taking the women’s club hockey program to the next level. The Leopards are now in third place in the conference, just two points (one win) out of second place.

“As a relatively new team going into our third season, I think a big goal for us would be to make it to playoffs in February,” junior forward and captain Chelsea Catlin said. “We went to playoffs last year only because another team had to back out. This year we want to earn it and be competitive at playoffs.”

The Leopards took a big step in reaching their goal by defeating IUP twice. The Leopards were carried by contributions from Catlin, McClean, sophomore goaltender Lauren Williams, and freshman forward Layla Ennis.

In Saturday’s game, the Leopards pulled away with the win after McClean and Catlin scored two goals apiece. Ennis added a goal and an assist, while freshman forward Leslie Phillips and freshman defender Sara Graham each recorded an assist.

“We have started to play more as a team,” McClean said. “We rely a lot on what we learned in practice and this helps us be successful against some of the better teams. That goes along with direction and leadership. We have a great coach and a great captain and we’re all working toward a common goal: playoffs.”

“Our defense was also able to shut down most of their attacks on net and if the puck did get to Lauren, who stepped in as goalie this weekend, [she] was pretty natural at guarding the net,” Catlin said. “Our offense was strong and when we were challenged on defense, we could rely on our defenders to shut it down most of the time.”

In Sunday’s game, McClean scored twice more and had a trio of assists to pace the offense. Catlin tallied a goal and two assists, and Phillips recorded a goal and an assist.

Senior defender Elise Bossert and senior forward Faith Price each chipped in an assist, while Ennis added another goal, her second of the weekend. Williams played another full game between the pipes in Lafayette’s 7-3 victory.

The team earned some cushioning in the standings with the wins and will look to move ahead of George Mason (currently in second place) when they return from winter break.

“I feel like these two games have given us confidence and helped us to click as a cohesive unit,” Caitlin said. “Going forward, I think we now know what we’re capable of as a team, and we hope to go up from here.”

“We have started to play more as a team as the season progresses,” McClean added. “I think we could be first or second in the league at the end of the season. We just beat IUP twice but lost to George Mason [at the beginning of the season]. The score of that game doesn’t reflect how we played, and I think we if we play them again we’ll do well.”

The team returns to action on Sunday, January 26th for a conference matchup with the University of Virginia.