Lafayette athletics recognized for improvement across the board in fall sports 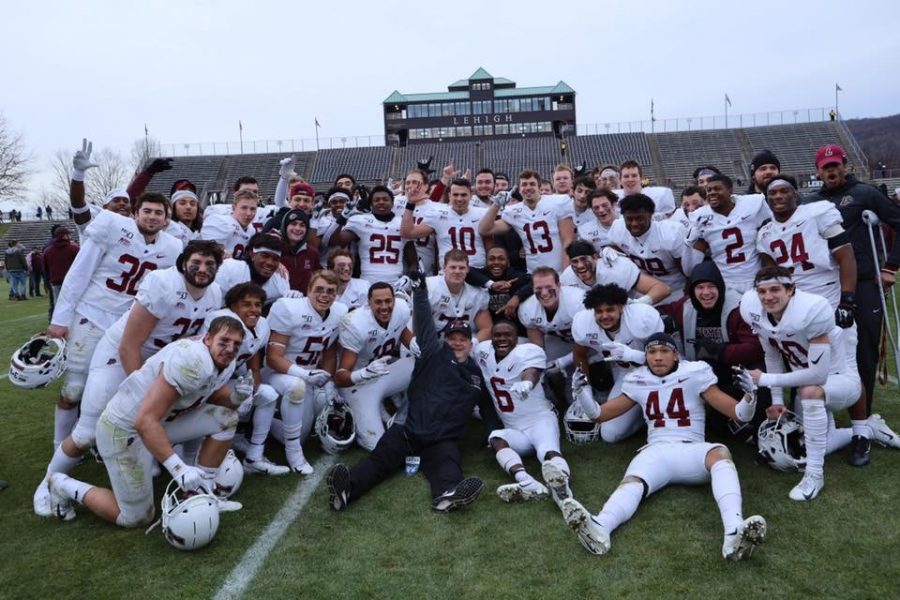 The football team finished second in the conference and beat Lehigh in The Rivalry game. (Photo courtesy of Athletic Communications)

In the span of one season, Lafayette athletics has risen from the forgotten depths of the Patriot League standings. Ranked dead last in President’s Cup (Patriot League) standings in men’s, women’s, and overall sports in 2018-2019, the fall performances brought the Leopards up to second on the men’s side, sixth on the women’s side, and fourth overall.

Every Lafayette fall-only sport which quantifies wins and losses improved on both their overall and conference records from 2018. All but one (volleyball) notched records over .500 in conference with two reaching the Patriot League Championship game.

“We always go into every academic year, every season, optimistic and motivated to do the very best that we can,” Freeman said. “I give a lot of credit to our coaches and to our student athletes. I think everyone has come in with a high level of focus, a high level of expectation, and work ethic too, to match it. And I give them all the credit in the world.”

Field hockey earned the two-seed in their conference tournament and won their semifinal to reach the final, where they jumped out to an early lead but ended up with the loss.

Men’s soccer met a similar fate after entering their tournament as the four-seed. They won their quarterfinal and semifinal before falling to Lehigh 1-0 in the championship game.

“I don’t think we could have ever anticipated the amount of support from our students that we got [at the soccer final],” she added. “It certainly felt like there were more Lafayette fans there than Lehigh fans, and so to really have that presence at an away game for such high stakes, that’s something that I will always remember. Watching the students get off the bus in all of their Lafayette gear, dressed up, and it’s freezing cold outside, and they were still there. So that was a pretty powerful moment.”

Although football entered their final game with a chance to clinch the Patriot League title with a win and a Holy Cross loss, breaking their four-year losing streak in college football’s oldest rivalry was an exciting consolation.

Freeman also noted that she saw a lot of student support from volleyball’s “pretty powerful” 10-game win streak. She credits the students for the resurgence of the “Leopards Lair,” which has brought some of the increased crowds to the games.

“Certainly it has been a welcomed effort because we want to make sure that we are showing love to more than just the revenue sports,” Freeman said, naming field hockey, soccer, and volleyball as examples. “They are certainly supported, and we want to see all of our student-athletes have those opportunities where they get to perform in front of larger crowds.”

Freeman added that the department is continuing to look at ways to promote the sporting events to continue the increasing support.

Looking forward to the spring season, Freeman said she is “excited [for] what we can accomplish,” adding that the winter and spring sport athletes were big supporters of fall sports, and she anticipates that “contagious energy and enthusiasm” to be present in the spring.

Freeman expects to continue her program of having successful coaches come to Lafayette and talk to the team’s coaches, as well as trying to increase funding for the department with fundraisers like the Bring the Roar Challenge.

According to assistant director of annual and leadership giving Chris Katsifis, the Bring the Roar Challenge brought in 2,289 donors who contributed a total of 463,359 dollars of fundraising, and their highest total of student donors ever, 365. Athletics were the top source of donations, with 189,890 of the total coming in the name of certain teams.

“I’m thrilled with the support and enthusiasm around the Bring the Roar giving challenge,” Freeman wrote in a message, via senior director of communications Scott Morse. “The creativity we saw from our coaches and student-athletes showcased the personality of our programs and amplified awareness. We saw an increase in both donors and dollars in support of athletics. We appreciate everyone’s support of Lafayette and are excited about what the future holds.”

As much work as Freeman does in her role, she says success isn’t possible without the student-athletes themselves.

“I wasn’t on the field,” Freeman said. “[The athletes] deserve all the credit for the success that we’ve had this fall. I’m the biggest cheerleader, I’m the biggest fan, and I’m there to support them, but in terms of putting in the work to get it done, they did that.”