Maroon Club honors football’s team of 1948, who received national recognition for their stand against racial injustice 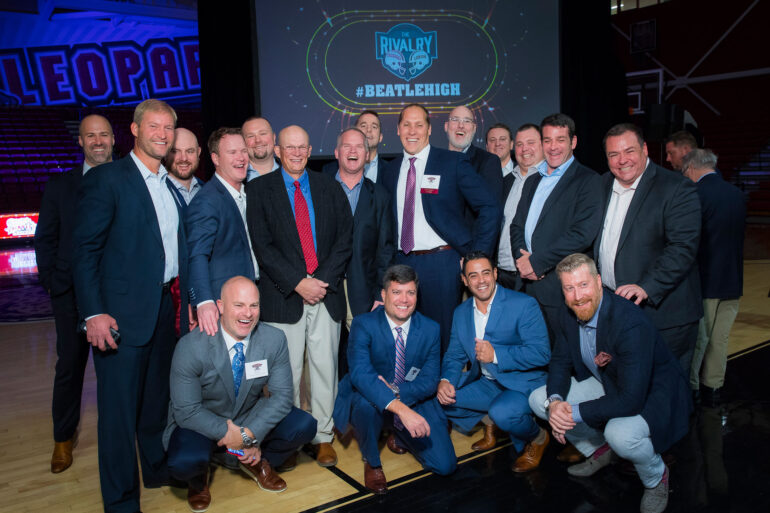 Players from the 1948 team and family members attended the induction ceremony in Kirby Sports Center. (Photo courtesy of Athletic Communications)

Lafayette’s football team went 7-2 in their 1948 season, but it wasn’t what they did with their strong record, elite running game, or eighth consecutive win in The Rivalry over Lehigh that got them inducted to the Maroon Club Hall of Fame.

It’s what they didn’t do.

Not all members of the team are still living, and some weren’t available to come to Easton, Pa., but a few were able to make it to College Hill to accept the induction. The ceremony was held at the annual Maroon Club Hall of Fame dinner on November 22.

“[It] was great to hear those stories and to hear about the sacrifice that that team made in order to do the right thing for a teammate,” athletic director Sherryta Freeman said.

“It’s a marker in history and it’s such a great lesson and example of believing in something, sticking to your convictions and taking a stand for something you believe in,” head football coach John Garrett said.

Showell came to Lafayette after serving as a Tuskegee Airman in World War II, and was one of just a few black students on campus at the time. After receiving the Sun Bowl invitation, the team was informed that Showell could travel to the game, but could not stay at the same hotel or play.

Showell encouraged the team to play without him, but the Lafayette faculty and football team both put the final decision to a vote, and the verdict was clear: if Showell couldn’t play, then neither would the team.

“It wasn’t about a political stance, it was more about ‘if my teammate can’t go, or can’t participate in the game, then we shouldn’t go either,'” Freeman said. “The college supporting that decision was pretty powerful.”

Just years before the civil rights movement began to gain momentum, the choice to turn down the bowl invitation still generated waves among Lafayette and the broader community. Students marched to downtown Easton to protest the racial discrimination, and even sent a telegraph to then-President Harry Truman.

The telegraph read “Denied Sun Bowl game because we have a negro on our team. Is this democracy?”

“To hear that story and to understand the magnitude of what that meant in that moment in 1948 is pretty powerful,” Freeman said.

“It’s a great show of character and unity to forgo that opportunity to play in that game to support their teammate,” Garrett added.

Both local and national news networks picked up on the story, and three years later the Sun Bowl hosted their first ever integrated game.

Terry Kitchen, a folk singer-songwriter who grew up in Easton, wrote a song in 2004 about the infamous 1948 Sun Bowl. The song was titled “The Greatest Game They Never Played.”