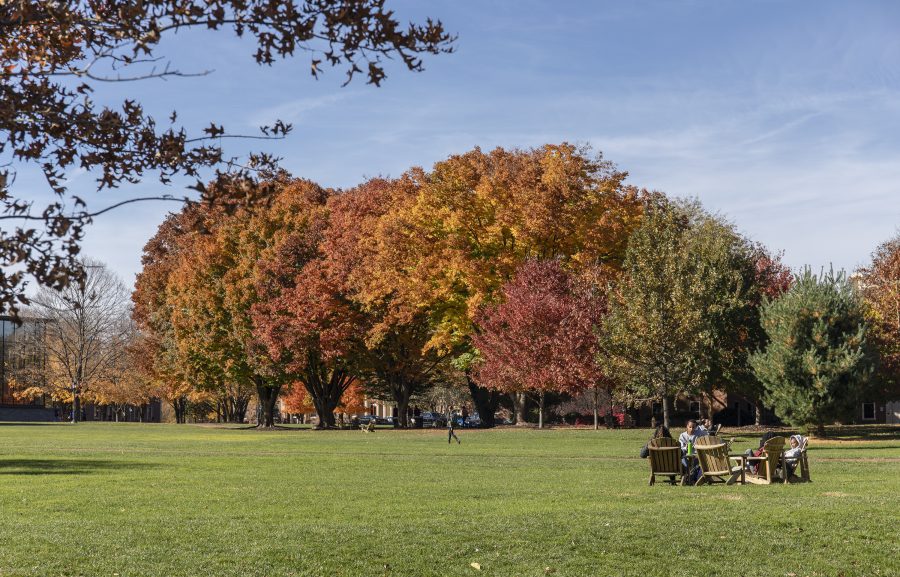 The college has successfully implemented several initiatives from phase one of the Climate Action Plan. (Photo by Elle Cox '21).

As climate change continues to be a pressing issue around the world, some Pennsylvania businesses and institutions are taking a stand and reaching out to their elected representatives in Harrisburg in a letter encouraging state lawmakers to support policies that accelerate the transition to a low-carbon, clean-energy economy. Lafayette was among the 18 parties to sign its name at the bottom.

President Alison Byerly’s decision to sign this letter comes at a time when the college itself is currently trying to do its part in reducing carbon emissions, and eventually go carbon neutral by 2035. These goals for the college were outlined in the Climate Action Plan 2.0 (CAP) which was created in the last couple years and started with phase one of its implementation this fall.

According to the timeline outlined in the CAP, in phase one, which includes immediate opportunities for 2019-2020, Lafayette aims to begin implementing high-priority energy efficiency projects, partner with a renewable energy consultant to investigate on-site solar, create an updated Green Building and Renovation Policy by fall 2019 and establish a green revolving fund by the 2020 fiscal year.

Campus Energy Manager Nick DeSalvo, one of the members of the Office of Sustainability overseeing the implementation of CAP, said the focus of phase one is to implement energy conservation and efficiency measures on campus “in order to optimize campus building systems.”

As of the end this semester, three energy efficiency projects have been completed to date: implementing LED lights throughout Kirby Sports Center, installing a variable frequency drive in Fisher West, and adjusting face velocities of fume hoods in Hugel Hall.

The next round of projects, DeSalvo said, will being in July 1, 2020, with the start of the fiscal year, and will be decided by the Office of Sustainability and Facilities Operations in the spring.

The college also signed an agreement with Customer First Renewables in December 2018 to serve as an advisor for both on and off-site renewable energy projects. This agreement is part of a cohort that includes Lehigh University and Muhlenberg College. Muhlenberg was also among the 18 institutions to sign the letter with Lafayette in late November.

Keeping pace with the proposed CAP timeline, the college was also able to establish a green revolving fund, which is meant to provide capital for projects that reduce the college’s “environmental impact and operational costs,” according to CAP. DeSalvo said, however, the bylaws for how the fund will function are underway and are expected to be completed by spring 2020.

While the college has been able to achieve the majority of their goals for phase one, due to the absence of a director for the Office of Sustainability from February-August 2019, DeSalvo said the new Green Building and Renovation Policy for renovations, office moves and new constructions was not able to be complete by fall 2019.

In addition to working on CAP initiatives on-campus, the college is also in the process of associating with a commercial solar project and, according to DeSalvo, is expected to sign a Power Purchase Agreement in December or January.

DeSalvo added that the the off-site, large-scale solar project will “neutralize approximately 47 percent of campus emissions.”

This project will also produce renewable energy certificates (RECs), which according to DeSalvo, will be used to address the emissions associated with electricity purchased from the local utility.

Going forward with phases two and three will involve other means of reducing carbon emissions through RECs and carbon offsets to try to reach carbon neutrality by 2035. Carbon offsets, according to DeSalvo include renewable energy and carbon sequestration projects located off-campus. One such project would be a reforestation project around Metzgar Field Complex, which is planned to be implemented between 2026 and 2035 and neutralize approximately one percent of campus emissions.