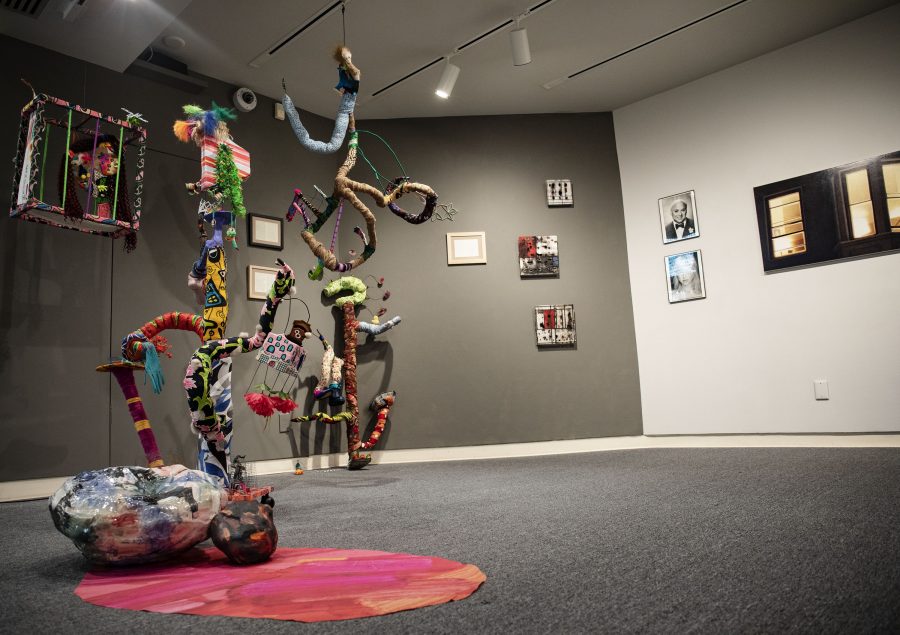 "Passing Bittersweet" will be on display at the Williams Center Gallery until Feb. 9. (Photo by Elle Cox '21)

While writer Ross Gay ‘96 is accustomed to demonstrating his ideas through his writing, he and the college are taking a new approach through the visual exhibition “Passing Bittersweet” which incorporates several of the themes and lessons from Ross’s 2019 “Book of Delight”.

The exhibition opened Jan. 9 and is open to visitors in the Williams Center Gallery until Feb. 9.

As guest curator Elizabeth Johnson explained in her talk at the Jan. 14 Arts Community of Easton (ACE) meeting, the title “Passing Bittersweet” comes directly from themes in Gay’s work. “Passing” refers to the temporary, and “Bittersweet” refers to both the good and the bad together.

The exhibition features a range of different art forms including photography, painting, sculpture, video, and even performance art by art professor Nestor Gill and Taller Workshop during the opening the closing receptions.

Director of Art Galleries Michiko Okaya, who originally came up with the idea to curate a show about “The Book of Delights,” said that after reading the book, she wondered how visual artists respond to similar situations, places, and ideas in their own lives.

Johnson has curated for the college once before in 2013, and said she is a fan of Gay’s writing, especially “Book of Delights” which she has read four times.

While its title might sound like a cheerful read, Johnson described the essays in the book as being short and funny yet also serious and dark.

Johnson selected works from many different artists to feature in the exhibition. These artists, she explained, did not have to directly match what Gay wrote about, but had to be “peripheral” artists like Gay.

Okaya said that she and Johnson were not interested in “illustrations of Ross’s delights.”

Instead, artists were selected “because their personal delights find aesthetic, physical ways to reframe negativity,” according to Johnson’s introduction.

“I was picking people who were outsiders, intellectually, conceptually. The idea of their work is outside of making a central, victorious, triumphant statement,” Johnson said.

Much of the art in the room, such as a photo of a dead pig and a video of a devastated Puerto Rican farm, does not come across as especially delightful. Johnson explained that the intention behind the juxtaposition between the positive book title and the art in the exhibition was to emulate a sense of sadness and vulnerability.

In her ACE talk, Johnson asked her audience to “pay attention to the peripheral instead of the status quo and see power in what’s vulnerable.”

Despite its complexity, Johnson said there is a positive message behind the exhibition. Gay, according to Johnson, wrote “The Book of Delights” as a way to remember the good things happening in the world despite the current fear-based political environment. The exhibition takes a similar approach.

“For people who struggle with depression or with feeling overwhelmed by life or feeling that they’re under instead of on top of the wheel of life…how do you pull yourself up by your bootstraps, emotionally? And the way to do that is small efforts,” Johnson said.

Some of those small efforts are represented by elements of the art on display, according to Johnson.

Okaya said she felt that the impact of Gay’s book was significant as well.

“Once you read Ross’s essays, you start to look at the world differently…you realize that it’s not all grim. It helps keep a perspective on things in your life,” Okaya said. “It’s kind of simplistic, but I thought that was a good lesson.”