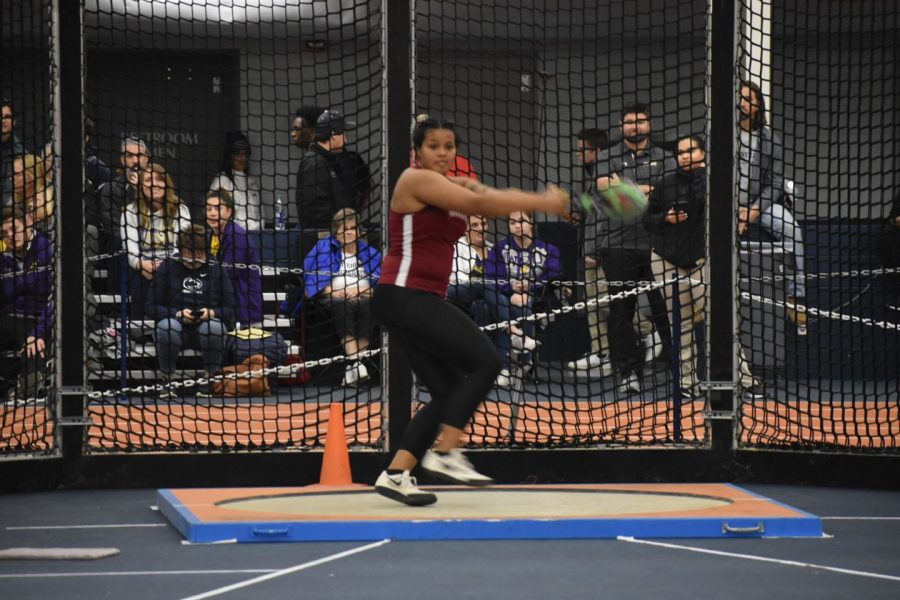 The Lafayette track and field team returned to action on Saturday afternoon in a dual meet but came up short against conference rival Lehigh. The men’s team won eight events while the women won two.

“Overall, we saw some really great performances and a lot of [personal records] from the meet on Saturday,” junior Brian Kaufmann wrote in an email. “We weren’t able to end with a win, however we definitely put up a fight that Lehigh was not expecting, and we will only be coming at them harder in the outdoor season.”

On the men’s side, Lafayette totaled 79 points behind Lehigh’s 99. Senior Tyler Hubeny earned a win in the 60-meter hurdles with a time of 8.37 seconds to give the Leopards five points on the scoresheet, narrowly beating the second place finisher by 0.17 seconds. Hubeny also placed second in the high jump behind sophomore Isaiah Moore, with both reaching the 1.90-meter mark.

One of the more exciting wins on the afternoon came from senior Calvin Schneck, who placed first in the 1000-meter run with a time of 2:32.15, just 0.06 seconds faster than the second place finisher. Sophomore Greg Bove took home first place in the 400-meter dash with a time of 50.93 seconds.

Kaufmann won both the long jump and triple jump events, notching best marks of 6.87 meters and 13.90 meters, respectively, winning the triple jump by a narrow margin of 0.01 meters.

“All of us train extremely hard throughout the weeks to improve and what we do in practice is to help simulate what we’ll do in a meet,” Kaufmann wrote. “I just went out there and did what I knew how to do, and I can say the same for everyone who competed on Saturday.”

In the shot put, junior Harrison Greenhill earned first place with a best toss of 15.21 meters. Finishing in second behind him was sophomore Casey McCollum with a toss of 15.01 meters. Junior Samuel Fishbein added to the success with a first-place finish in the weight throw with a mark of 17.91 meters.

“A lot of us are only doing one or two events this weekend since we competed hard last weekend,” Kaufmann wrote. “The season is starting to pick up pace for sure, so I expect a lot of good performances from here on out in all the meets we’ll have, hopefully leading to some great times/distances/heights at the Patriot League Championship.”

Junior Katherine Ullmann also placed second in the high jump with a best mark of 1.55 meters, and junior Olivia Barney was the runner up in the weight throw with a 14.96 meter toss.

Up next for the Leopards is a trip to Lewisburg, Pa., for the Bison Open and Multi meet this weekend.

“Some team goals are definitely to keep improving and to get as many people to qualify for the Patriot League [championship] meet as possible,” Kaufmann said. “There’s a lot of potential with our team in a lot of areas, so I’m really excited to see how everyone progresses the rest of this season and moving to outdoors.”