Parties, pastimes, postwar and Prohibition: What was The Lafayette reporting on 100 years ago? 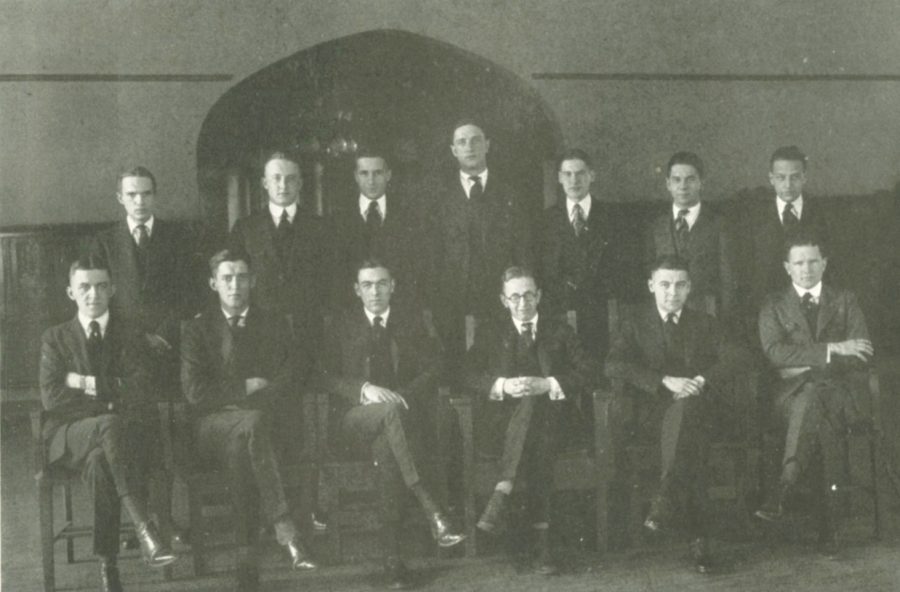 The Lafayette staff in 1920 reported on both campus-wide and national events and issues. (Photo Courtesy of Lafayette College Special Collections)

The Great War was still an open wound, women had just won the right to vote, and alcohol was the United States’ newest illegal vice when The Lafayette chronicled it all 100 years ago for 10 cents a copy.

Pennsylvania’s oldest college newspaper had already been in operation for a half century in 1920, and its pages reflected not only what was happening on campus, but also around the nation. Memorials were set for those who lost their lives in the war. Breweries cared little about Prohibition and continued to advertise in The Lafayette, and war curriculums were still common at colleges despite Armistice.

But then, as now, the paper reflected what the students wanted to know: Where is the next party and what rules can I break and still get away with?

Here then, for your reading pleasure, is a sampling of The Lafayette in 1920:

“Junior Week is a Success: More than 135 Girls are Guests of Fraternities” reads a front-page headline on February 11.

“Stags are Prominent” reads another, detailing the precise number of men (75) who arrived to a house party without a date.

The Lafayette reported that the annual Delta Kappa Epsilon dance was cancelled by faculty but promised “usual house parties” to be held that weekend. Phi Kappa Psi and Zeta Psi would host afternoon tea and the school’s Junior Hop would take place, featuring music from student orchestral groups.

On January 14, The Lafayette recounted a Delta Tau Delta Christmas-themed party that was a month delayed but still held so that the fraternity’s decorations would not go to waste.

It seemed that not even Prohibition could get in the way of a good time, as many Budweiser advertisements were still featured in the paper (made “with the present regulations” of course).

One sarcastic columnist revealed insight into fashion trends taking over the campus.

“We note the corduroy wave has hit the campus-well, this is better than a heat wave, anyhow,” the writer asserted.

The Lafayette also featured consistent coverage of other campus organizations including the fifteen fraternities, the glee club, the mandolin club, the newly formed rifle club, the Sock and Buskin Dramatic club, and the Dixie club, whose purpose, as stated in the Feb. 18 issue, was to “spread Lafayette propaganda in the Southern states where Lafayette is practically unknown.”

Much like today, The Lafayette shared sports scores and outcomes — as well as scandals. In February, The Lafayette reported that the 1919-1920 basketball season came to an abrupt halt when the coach resigned after a dispute with players.

The baseball team was apparently doing well in the spring of 1920, although one editorial pointed out that after an impressive win against Princeton, there were only “a handful of supporters” in the stands.

Another critical editorial titled “What is the Matter with the Band?” puts forward a series of questions: “What has become of it? Has it gone into discard, as have many other traditional characteristics of Lafayette College? Are the students of this college dead?”

Parties and pastimes could not disguise, however, the inescapable toll of the war.

The Sons of Lafayette Club, made up of former servicemen, held its first meeting in February. They planned a memorial service for those who had lost their lives in war.

The March 3 issue detailed that service that honored thirty Lafayette students and graduates who lost their lives fighting in World War I.

“Every Lafayette man must shoulder his share of the responsibility and in this way make possible the realization of the ideals for which our comrades gave their lives,” the newspaper states.

The college still had a War Curriculum in place which included coursework such as military science and tactics as well as metallurgy.

On February 18, The Lafayette announced that the Metallurgy class had been omitted, which distressed students so much, they asked the professor (who had by then found a new career at the Bethlehem Steel Company) to come back and teach an evening course.

Amidst weekly cigarette advertisements for local drugstores (even the bookstore sold tobacco and cigars), The Lafayette kept up to date on newsworthy information for its students.

The February 11 issue warned students about the new rule concerning mandatory daily Chapel attendance: any student who misses Chapel fifteen times will have to take an additional course in the Bible department.

Another issue reported plans to place the now iconic statue of The Marquis de Lafayette in front of Colton Chapel, which would ultimately happen in 1921.

On March 17, one student aggressively accused his fellow students of being less informed than soon-to-be eligible female voters.

“Are you a man? Or, do you have more interest in pink teas and bridge than in patriotism and politics? Are you alive? Or, do you propose to let the shopgirl out-think and out-vote you next November?…Wake up! Get busy! Uphold the glory of your sex!” the article declares.